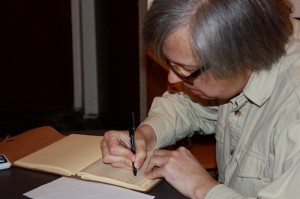 Born on July 4, 1958, Keith Allen Broyles was the youngest of five children to Fred R. Broyles and Donna V. Doering.  He spent his early years in Rosalia, Washington, where his father was the high school principle.  When Keith was 13, the family moved to Spokane, where his father taught English at Spokane Community College.  Fred died in December of 1975, and in February of 1977, Donna married Merle Sasser.  Merle moved Donna and Keith to Hoquiam, Washington, where Keith graduated from Hoquiam High School in 1978.

Keith attended Western Washington University in Bellingham, where he studied business administration, receiving a B.A.  After college, he moved to Onion Creek where Donna and Merle now owned a country store.  In Onion Creek, spending winter nights reading by the wood-burning stove, he kindled a love of literature.  He realized that writing, not business, was his passion, and he decided to spend his life writing poetry and fiction.

He spent the 80s drifting from city-to-city, job-to-job, apartment-to-apartment, and love affair-to-love affair.  He lived in Spokane, Seattle, and Denver.  In 1990, he returned to the city that is best described as his “hometown”——Spokane.  For the next two years, he studied creative writing at Eastern Washington University in Cheney.

He continued to live in Spokane until November of 1999, when he moved to Olympia, Washington.  He currently lives in Olympia, where he continues to write.