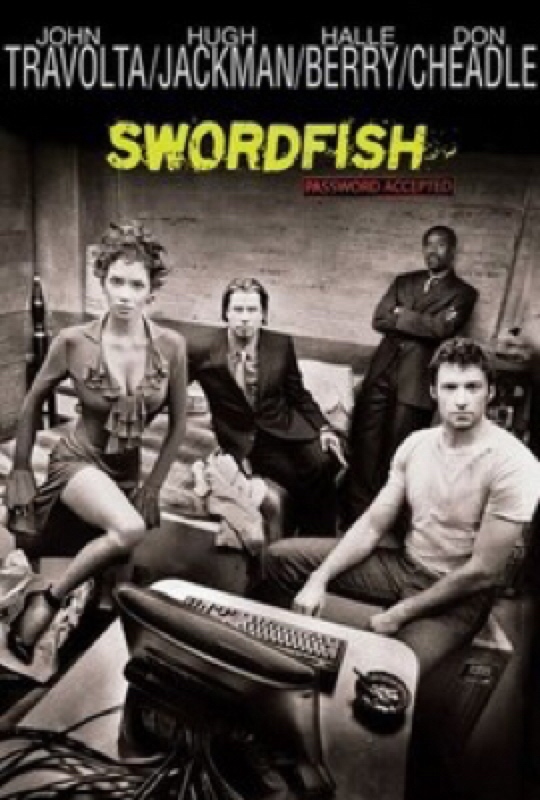 Years ago, I added Swordfish to my Netflix DVD queue. I’m not sure why. Perhaps I saw it on some list of movies to watch, or I was just processing Netflix recommendations, or maybe I was looking for thrillers to add, or Hugh Jackman, John Travolta, or Halle Berry movies. I was interested in seeing it, but I was never excited to see it. As such, it was a movie I often pushed down on the queue in order to see movies that inspired more excitement. I tend to keep two hundred movies on my queue, and I’m constantly shooting a movie up to the top of the list. So like a lot of movies, Swordfish has been on the list for years, but over time, it wormed itself to the top of the list, and last week, it finally arrived in the mail. I wish I could say it was worth the wait, but after seeing it, I realized the real thing stolen in this caper flick was my time.

As I so often do, I blame the writing. You can make a bad movie with good writing, but it’s impossible to make a good movie with bad writing. The screenplay for Swordfish–written by Skip Woods–was incoherent, contrived, and sloppy. It suffered an identity crisis. Was this an action film? A suspense thriller? A caper flick? A lot of movies are hybrids of different genres, but those genres have to work together, compliment each other, and blend together. Watching Swordfish taught me that that process begins with the screenplay. Woods failed to fuse the various genres together in a coherent screenplay, and that failure condemned Swordfish to failure.

The first ten minutes of this film contains its finest scene. Gabriel Shear (John Travolta) drinks coffee in a coffee shop and talks to his companions about Dog Day Afternoon and how different the events would’ve played out if Al Pacino’s character showed a willingness to execute hostages. Then they cross the street into their own bank robbery–already in process. The SWAT team are surrounding them, and FBI negotiators are talking to them. But events fall apart fast with spectacular but tragic consequences. It was a beautiful set-up that promised a great movie. But after that set up…

…the movie cuts to events that happened prior to this. Once they did that, I realized they just showed me the climatic scene. Why would they do this so early in the movie? To pique my interest in a story that was destined to fall apart fast. That’s exactly what happened.

Stephen E. Rivkin acted as editor, and I wish I could tell you that above edit was the worst mistake he made, but the editing throughout Swordfish proved to be as sloppy as the writing. Dominic Sena directed Swordfish. Paul Cameron was the cinematographer. The photography was beautiful, but it wasn’t so memorable that it argues for seeing the movie despite its other shortfalls. The best shot shows Halle Berry sunbathing topless. I love the lighting and the warm colors in the shot, but unfortunately, it qualifies as gratuitous nudity, because the scene neither developed her character nor advanced the plot.

John Travolta stars as Gabriel Shear. Early in the movie, they strived to create a Keyser Söze vibe to Shear, as they had a prisoner in an interrogation room build him up to mythological proportions.

He exists in a world beyond your world. What we only fantasize, he does. He lives a life where nothing is beyond him.

But what made Keyser Söze such a compelling character was his mystic. Though we see shadows and silhouettes of him throughout The Usual Suspects (1995), he’s never a solid character. Gabriel Shear is on screen too often and in too many ways to convey the same intrigue. They strived to keep the mystic going by revealing his true motivations later in the movie, but that further weakened him. In truth, his true motivation broke me out of my willing suspension of disbelief. By that point, there was little willingness left, but what was left was ruined by Gabriel’s final reveal. 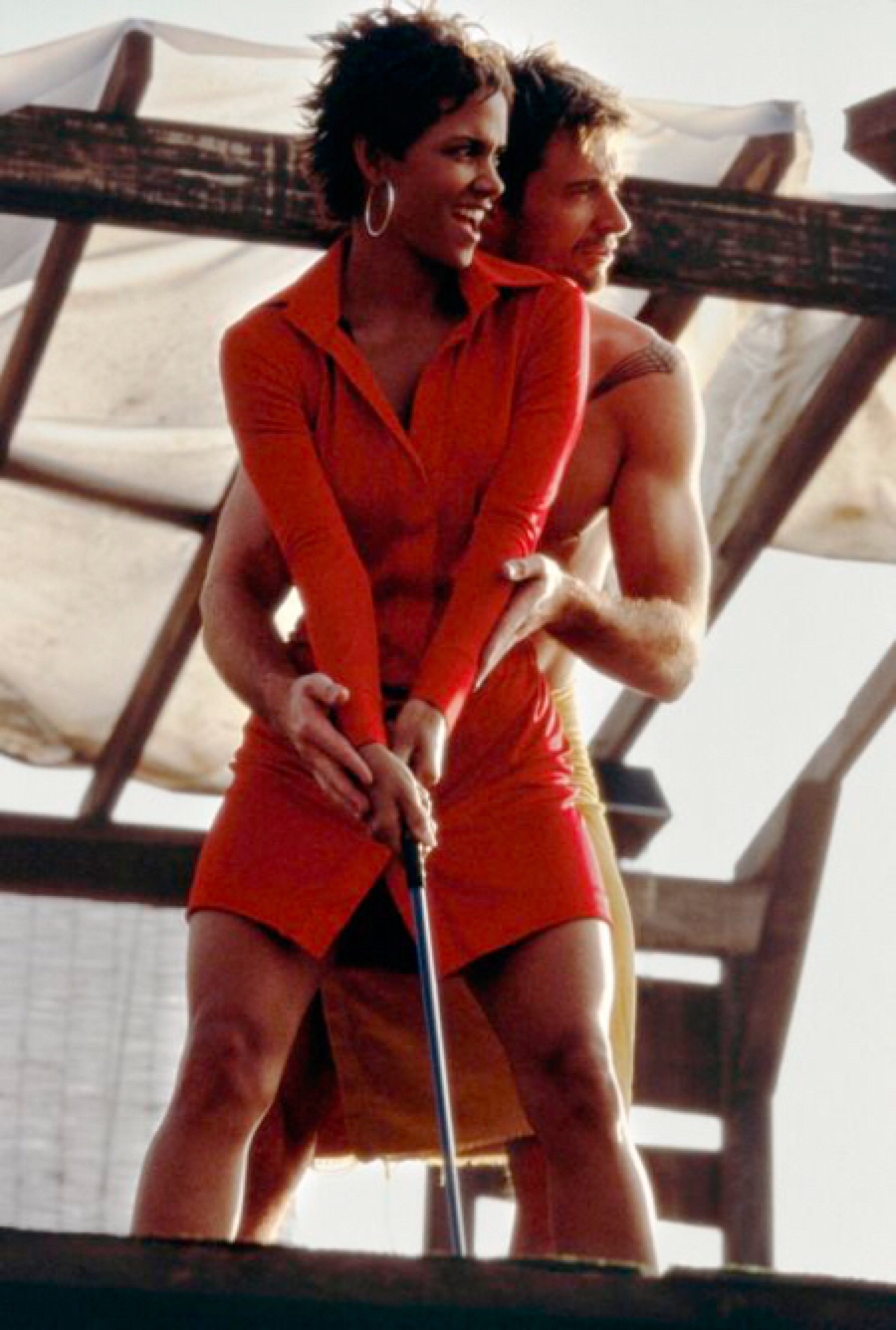 Halle Berry as Ginger and Hugh Jackman as Stanley

Halle Berry’s plays Ginger Knowles, Gabriel’s assistant. After her initial introduction, the filmmakers had little use for her. She feels added in order to make the movie sexy. Literally sexy! I already wrote about the gratuitous nude scene, but in addition to it, they had other scenes where she bent over in a tight skirt to take a golf swing, undressed to her underwear, and dropped sexual innuendos. It’s the worst use of a female lead in a movie I’ve seen in years. There was nothing wrong with Berry’s performance; she played Ginger with grace and conviction. But it’s a throwback to a time when Hollywood expected nothing from its actresses except for a pretty face and an obligatory nude scene.

Hugh Jackman plays Stanley Jobson, the protagonist. He’s a computer hacker, recently released from prison, who agrees to do one last job, in order to raise the money needed to get custody of his daughter. There’s not much else to him. It’s not uncommon for the villain to be more memorable than the protagonist, but that’s usually because of the stellar performance of the actor playing the villain. In Swordfish, Gabriel is more memorable because Stanley is not memorable at all. Like Berry’s Knowles, after his introduction, the filmmakers had little for him to do. His main task is to react with shocked face to Gabriel’s evil. That’s a good role for a minor character, but it makes the protagonist weak. No one wants a weak protagonist.

Don Cheadle plays Agent J.T. Roberts, and Sam Shepard plays Senator James Reisman. Other supporting cast members include Drea de Matteo as Melissa, Rudolf Martin as Axl Torvalds, and Camryn Grimes as Holly, Stanley’s daughter. To Grimes I award best actor. She had a small role, but her character was the most believable character in the film. And for a child actor, she performed well.

Sloppy writing, sloppy editing, and poor character development makes Swordfish a wasted movie. That saddens me, because I usually enjoy the performances of its three main stairs. In fact, I think I’ll revisit them in some of their better movies. For John Travolta, I’ll rewatch Pulp Fiction. For Hugh Jackman, it’ll be Logan. And for Halle Berry, I’ll rewatch Gothika. If you’re wondering what to watch this weekend and debating about seeing Swordfish, let me suggest instead, any of these other three films. 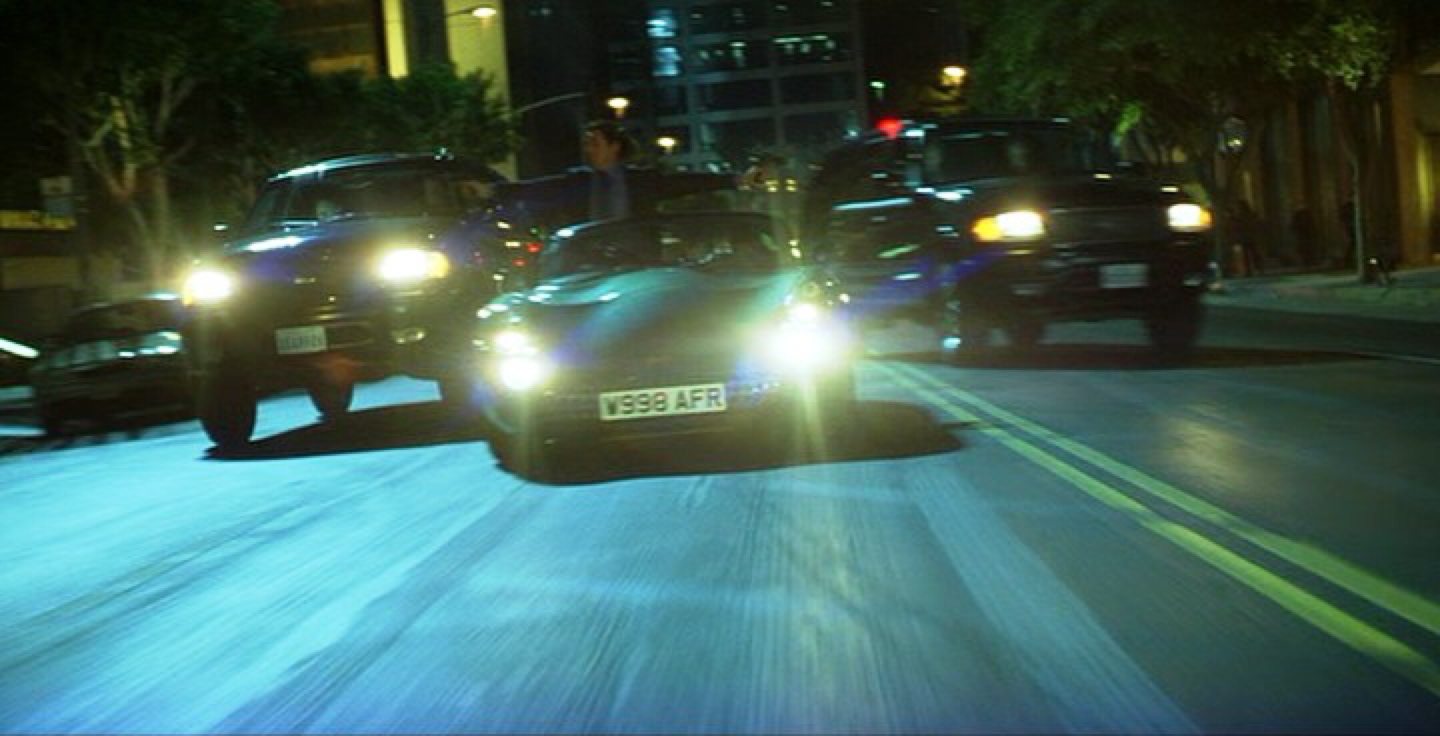