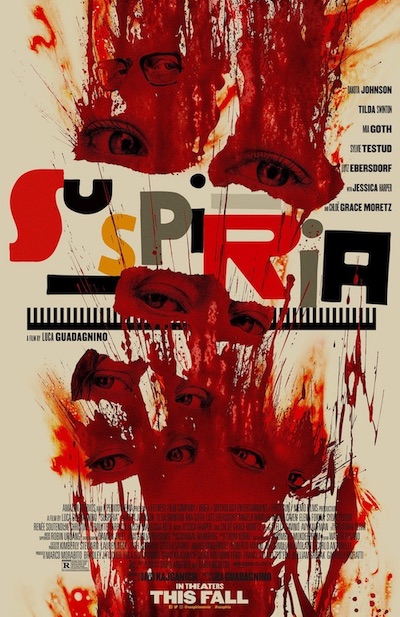 When I heard that filmmakers were remaking 1977’s Suspiria, I suffered two conflicting reactions. Hell no! I thought. Don’t touch this cult favorite! Don’t ruin it with your Hollywood sensibilities. But at the same time, I thought: It’ll be interesting to see what they do. To call a film a cult favorite is to admit that the movie has weaknesses that prevents it from attracting a broad audience, but it has other elements that pleases a narrow audience. For Dario Argento’s Suspiria, I belong to that narrow audience. It’s a movie I see once or twice a year, a movie that grips my imagination, a movie that never ceases to stun me. At the same time, it has major flaws. The plot is loose, and it contains at least one scene that, though shocking, plays like a digression. The characters, including the protagonist, Suzy Bannion, lack character development. If the remake fixes these problems, it could present us with a more coherent movie and a better context for the horror we are witnessing.

Luca Guadagnino directed Suspiria (2018), from a screenplay written by David Kajganich. The pair had worked together on 2015’s The Bigger Splash. Much of the praise I have for Suspiria I attribute to Kajganich’s writing. He took the skeletal plot of the original movie and added flesh and heart. He rounded out the characters and provided a more convincing context for the action. In my research, I discovered that he’s one of the writers working of the upcoming Pet Sematary remake–Jeff Buhler is the other. I was excited to see Pet Sematary before learning this; now I’m doubling excited, because Kajganich proved himself a talented writer with this screenplay.

The color is often muted–undersaturated in photographic terms–which gives the movie an eerie, depressing, realistic atmosphere. At other times, it pops from the screen like a slap in the face. Pay attention to this! I think of the crimson costumes the dancers wore during a performance, the way the blood red contrasted with the dancers’ white skin. These costumes give 2018 a sexiness that 1977 lacked. I’m wary of writing about the sexiness, because even in this scene, there’s a macabre undertone that makes any sexiness feel creepy. In both this scene and in the climatic scene, the score by Thom Yorke builds to a crescendo that warns us of approaching trouble. At times in the 1977 movie, the music overpowered the visuals, but that never happens in the remake. Yorke’s score provides an eerie background to what we are seeing, but it never overshadows it. 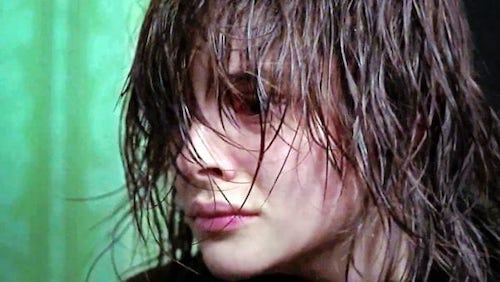 This is a horror movie; its deaths are horrific. The worst thing the filmmakers could do would be to film the same deaths scenes as the original, but they sidestepped that mistake. They created their own memorable death scenes. One scene was so shocking that I curled up in the fetal position in my chair. This is going on too long, I thought. In retrospect, I wouldn’t cut one second from it. It grips, it horrifies, it inspires nightmares. And it’s not even the most shocking scene in the movie!

1977’s Suspiria was set in Berlin, at a dance academy, where young dancers came to study dance and perfect their skill. 2018’s Suspiria is set at a dance company in 1977, in a Berlin divided by the Berlin Wall. This setting gives the movie a political subplot that at first confused me, even annoyed me, but upon reflection, I realized it plays to the movie’s theme. The main theme in any horror movie is death, but Suspiria (2018) reminds us that witchcraft isn’t the only deadly activity humans engage in.

Dakota Johnson stars as Susie Bannion; Tilda Swinton stars as Madame Blanc. Both had worked with Guadagnino in The Bigger Splash. No doubt from that experience, he knew that Johnson and Swinton have chemistry. That proved useful in Suspiria, where the interplay between Susie Bannion and Madame Blanc drove the plot. Swinton also played Helena Markos and Dr. Josef Klemperer. Mia Goth, whom we saw in A Cure for Wellness (2017), plays Susie’s friend and confidante, Sara Simms. You would think that playing three characters in one film would make Swinton the best actor, but–not discounting her great performances–I award Chloë Grace Moretz with that honor. Her role as Patricia Hingle is so brief it is almost a cameo, but her performance stands as the best in a film filled with excellent acting. I’m looking forward to seeing her in the upcoming Greta; in fact, I’m adopting a new rule–any movie with Moretz in it is a must-see for me.

Supiria (2018) is exactly what I wanted from this remake. It took the premise of the original and added layers to create depth. It fixed the disjointed plot and gave us convincing characters. It feels like a throwback to the horror movies of the 1970s, horror movies that pushed limits and took risks, horror movies that understood you don’t scare adult audiences with PG-13 imagery. Hollywood of late have been too afraid to make R-Rated horror movies, so they play it save with bloodless deaths and fake jump scares. Suspiria does not play it safe. Brave filmmakers made Suspiria. Are you brave enough to see it?