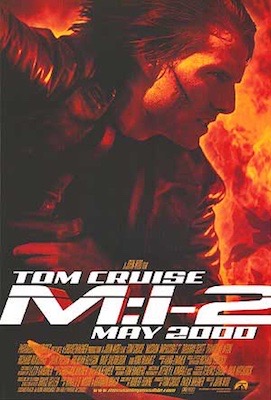 Before rewatching Mission: Impossible II (2000), I remembered it was my least favorite Mission: Impossible movie, but I hoped that with a fresh viewing, I would find more to like about it. Sad to say, I’m disappointed in the results. Instead of reversing my judgement, rewatching it reaffirmed my sour judgement. It’s not a horrible film. It has its moments. But it suffers from a weak screenplay. In fact, most of what I hated came from the screenplay. Since Robert Towne, the man who gave us Chinatown, wrote MI:2, it’s a double disappointment that his writing here was subpar.

There’s a theory–I don’t ascribe to it–that the plots of action films don’t need to be good. Keep it simple. Keep it loose. A thin plot to give us a car chase, a fist fight, and a gun battle, add a pretty girl–preferable topless–for the good guy to kiss. It’s a throwback to the 70s and 80s and to all the action movies I can’t named, because I forgot them minutes after leaving the theater. For most of my life, I loathed action movies, and only now am I finding appreciation in them. I haven’t changed. The movies changed. Action movies now give us intriguing plots and rounded characters. They’re filled with drama and pathos, humor and growth. The modern action hero bleeds as much inside as he or she does outside. With Ghost Protocol and Rogue Nation, the Mission: Impossible franchise would grow into that modern action film, but in Mission: Impossible II, director John Woo looked backward rather than forward.

Perhaps this is most obvious in his treatment of Nyah Nordoff-Hall, played by Thandie Newton. There’s a trend among internet critics to criticize a film for the sexualization of the female lead, but you don’t often see me following that tread. Since seeing beautiful people being beautiful is one reason we love the movies, glamorizing the characters is natural, but it has to be appropriate to the tone and genre of the movie. The action genre, with its glamorized violence and heightened masculinity are an appropriate medium to let women be sexy. Woo did worst than sexualize Nyah; he turned her into a Bond Girl. We meet her as an expert thief in the middle of a caper. Her skills are strong, as is her confidence. We see further evidence of this confidence as she and Ethan Hunt enjoy a high-speed car chase on a mountain road. I know I’ve see this scene in James Bond. Was Woo playing homage? Or plagiarizing? Is the car chase a flirtation or foreplay? During it, like a Bond Girl, Nyah fell for Ethan. After their first kiss, her skills as a thief, so well developed in her introduction, played no role in the movie. She became a damsel in distress, a woman for Ethan to protect and rescue.

I hate damsels in distress! 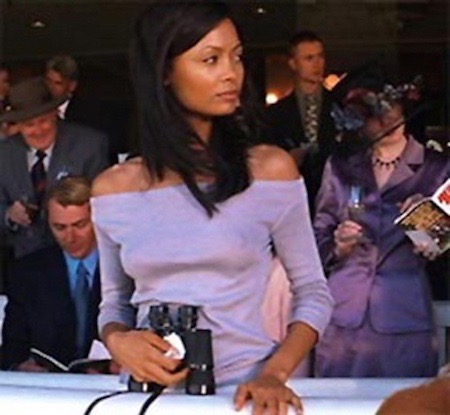 In no way should this reflect on Thandie Newton, to whom I award best actor. She took the role Towne and Woo created for her and turned it into a believable and sympathetic character. Her ability to emote was the best in the movie. From desire to anger, from fear to despair–I always knew what she was feeling. Her facial expressions also told me what she was thinking. During the movie, she made several important decisions. Somehow her expressions and body language communicated those decisions even before she acted on them. The filmmakers wanted a Bond Girl, but Newton’s talent refused to be so characterized.

As the Bond Girl, she was the love interest between rivals Ethan Hunt and Sean Ambrose. As the protagonist and antagonist, respectfully, they had enough to fight over without throwing a woman in the mix. Tom Cruise plays Ethan Hunt, the IMF team leader tasked with recovering a deadly test tube virus called Chimera. Sean Ambrose, played by Dougray Scott, a rogue IMF agent, had stolen the virus and its cure and hoped to sell them for millions. Since Ambrose had the same training, skills, and career as Hunt, the rivalry between them is the best element in the film. It was fun watching them trying to best each other. The rivalry led to a major showdown that included gunplay, a motorcycle chase, and a tense knife fight. We go to action films for the action, and MI:2 doesn’t disappoint on that score. As you likely know, Cruise performs his own stunts, and that commitment pays off in our excitement and thrill.

Cleaver teamwork distinguishes the Mission: Impossible franchise from other spy franchises, like James Bond or Jason Bourne, but the teamwork in MI:2 was another disappointment. Ving Rhames returned as Luther Stickell. John Polson played Billy Braid, a helicopter pilot Hunt selected for the team. The Bondesque structure left little for Luther and Billy to do. I felt as if scenes were added just to give them screen time. That’s sad for both of them, but it’s particularly sad for Luther, who, next to Hunt, is the only character to appear in all the Mission: Impossible movies.

As I said in my review for Mission: Impossible (1996), Brian De Palma transformed the 1960s television show into a modern action movie. In Mission: Impossible II, Woo and the other filmmakers looked to define what it means for it to be an action franchise. They borrowed from the James Bond franchise, but that proved to be an ill-conceived approach. James Bond is great, but what makes him great is different than what’s needed from Ethan Hunt and his IMF team. MI:2 is a good movie to see for its action, for the rivalry between Hunt and Ambrose, and for Thandie Newton’s performance, but it feels like a movie outside the franchise. It doesn’t draw from the first movie nor lead into the next. The modern film franchise needs to be something more than a collection of sequels. As the character arc within a movie, they also need to arc over the series, and each movie needs to contribute to that growth. Mission: Impossible II fails to do this. In a word, it’s just another 1980s sequel.