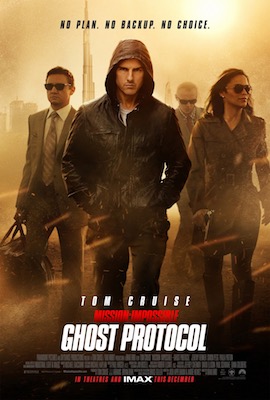 Not counting Mission: Impossible: Fallout, released last week, there had been five Mission: Impossible movies. In case you haven’t already guessed, I’m watching and reviewing them in anticipation to seeing Fallout. My reviews, so far, have been mixed. I enjoyed the first movie, but the second movie had the wrong tone. It mistook itself as a James Bond movie. I loved the third movie; in fact, I gave it a 100% score. Following that excellent movie, I had high anticipation for the fourth movie, Mission: Impossible: Ghost Protocol (2011), but though it’s a good movie, better than most action films, it didn’t live up to my exaggerated anticipation. Though I haven’t rewatched Mission: Impossible: Rogue Nation, I remember that I score it high points in 2015, when it was released. As far as this franchise is concerned, it seems the odd number films are great but the even numbers are let downs. Though that doesn’t bode well for Fallout, an even number movie, I still have high hopes for it.

But let’s talk about Ghost Protocol. Why did it disappoint me? It’s not fair to call it a disappointing movie, per se, because it disappointed me only because, following MI:3, I expected it to be as good. It’s a disappointment only in comparison to its older sister. If MI:3 deserves its 100%, then Ghost Protocol comes in at 90%. Still an A, right! It has all the elements to be a good action movie and a good Mission: Impossible movie. In fact, Ghost Protocol is the most Mission: Impossible of them all, at least so far. When I think about what distinguishes this franchise from other spy franchises, like James Bond or Jason Bourne, two answers come to me. First, Mission: Impossible is about the team. It’s not one-agent against the evil enterprise; it’s about a team of highly trained professionals, each with their own skills and strengths, joining together to achieve something that no one person can achieve. Second, it’s about the caper. Sometimes the caper is a theft and other times it is a con game, but either way, we, the viewers, don’t quite know what they’re up to, until we watch it on the screen.

And then we realize: Wow! Cleaver people, these guys!

Ghost Protocol feels like the first Mission: Impossible film written with an awareness that those two characteristics are what makes a Mission: Impossible film. The other movies got there by accident; this one knew what it was about from the first scene to the last. Ethan Hunt (Tom Cruise) is the team leader and the team anchor. He’s joined by Benji Dunn (Simon Pegg), whom we met in MI:3. Benji is an intriguing character, because he’s the man in the chair, who comes out from behind the desk and joins the field agents. New to the team is Jane Carter (Paula Patton). Okay, I got to tell you, that when she introduced herself to Ethan Hunt as Agent Carter, my sarcastic humor took hold. “This is where the IMF meets SHIELD,” I said. Coincidental character names aside, she’s a female agent with the same skill set as Ethan Hunt. I wish they had done more to develop her as a character, but it was good to see a strong female. The series has come far since MI:2, where it used Thandie Newton’s Nyah as a Bond Girl. The other new team member is William Brandt (Jeremy Renner). Though he’s introduced as an intelligence analyst, we soon learn that he also has kick-ass skills. 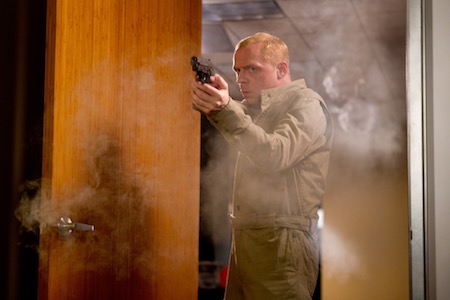 Introducing this team and bringing them together was the first task of Ghost Protocol. In many respects, the movie feels like an origin story for this IMF team. I suspect that the filmmakers thought they had the cast they were going to use in future movies. The second tasks was showing this team working together, which they did in several capers. Ghost Protocol has more capers than each of the other movies. There was a prison break and a Kremlin caper. And then there was the dramatic sequence in Dubai, that included Ethan Hunt’s scaling Burj Khalifa. Nail biting that! And yes, that was really Tom Cruise hanging by a rope off the world’s tallest building. All this led to the final caper in Mumbai, with its action-packed climax. Good stuff, all that. One caper after another, to give us that quintessential Mission: Impossible feel.

But the plot sucked. It served its purpose for giving us hooks to hang those set-pieces on, but it felt too simple-minded and contrived. Michael Nyqvist starred as Kurt Hendricks, the main villain, a man who believes nuclear war would be healthy. As bad as that sounds, I feel like the local cops could’ve dealt with him. No need to call in the IMF. A little more interesting was Léa Seydoux as Sabine Moreau. She’s an assassin who murdered an IMF agent and who’s working with Hendricks. I think they missed an opportunity with Moreau, who would’ve been a more interesting main antagonist. Maybe I just want to see Seydoux get a decent role. She’s a French actor who’s received many accolades across the Atlantic, but somehow never seems to get a good role from American filmmakers. I wish Ving Rhames as Luther Stickell had a larger role. He, along with Michelle Monaghan as Julia, Ethan’s wife, made an appearance at the end of the movie, in an epilogue-styled closing scene.

My award for best actor goes to Simon Pegg as Benji Dunn. As the man in the chair becoming a field agent, he has the most interesting arch. This choice is more of a life-time achievement award than a best actor award for Ghost Protocol. Simon Pegg is there in so many movies I love, always doing a great job, but never playing a role big enough for me to mention. As Benji in Ghost Protocol, he’s part comic relief, but during the climatic scenes, he proves his mettle.

Brad Bird, the writer/director behind The Incredibles, directed Ghost Protocol. Josh Appelbaum and André Nemec wrote the screenplay. Robert Elswit was the cinematographer. Michael Giacchino wrote the score. I always have trouble spelling his name, but I better learn it, because he’s fast becoming the new John Williams.

I started this review talking about my disappointment with this movie, but now that I’ve written it, I fear calling it a disappointment sets the wrong tone. Mission: Impossible: Ghost Protocol is exactly what I want from a Mission: Impossible movie. It had great teamwork and spellbinding set-pieces. The acting was impressive, and the visual effects were believable. I craved a more interesting plot and a more interesting villain, but these weak elements didn’t ruin the movie for me. I enjoyed it, and I bet you will too.