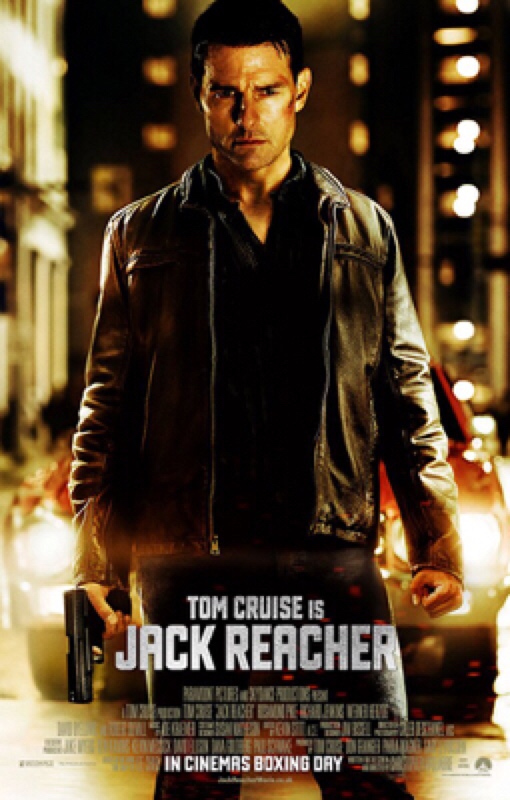 Lee Child has made a name for himself writing the Jack Reacher novels, about an former military police officer who turned quasi-private investigator in civilian life. Years ago I read Tripwire, the third Jack Reacher novel. I found it entertaining, but not much else. It’s the type of novel we think of as a page turner. It kept me occupied for a week or so; I was anxious to learn what came next. But when I was finished, nothing about it stuck with me. Jack Reacher struck me as as just another alpha male doing alpha male things like fist fighting, gun fighting, solving crime, and romancing women. I don’t believe I could tell you anything about the plot, except there was a mystery to solve and a climatic showdown at the end. As advertised, it was a crime novel of the action sub-genre. Entertaining without substance.

Jack Reacher, the 2012 movie staring Tom Cruise as Reacher, strikes me as the same. It’s entertaining, but there’s no real substance here. It’s based on Child’s ninth Reacher novel, One Shot, where Reacher investigates the very real American problem of a gunman killing random people for sport. In this case, the suspect is an ex-military sniper, James Barr (Joseph Sikora), whom Reacher had previous dealings with. Though Reacher believes in Barr’s guilt, he accepts the commission of the defense lawyer, Helen Rodin (Rosamund Pike) to act as her lead investigator. The further he dug, the more he began to doubt Barr’s guilt.

I loved the opening sequence, that showed the sniper attack. The editing, the music, the shots were all beautifully handled to create suspense and terror. After that sequence, however, Jack Reacher fell into action-movie mode, with the same action-movie clichés–fist fights, car chases, snide dialogue, and gun battles–that we have seen in so many action movies. I like car chases; they give me a chance to go to the bathroom without fearing I’m missing anything important. Joking aside, the action sequences were dramatic, but they were also practiced and unimaginative. There was nothing fresh in this movie. Even Cruise’s delivery as Jack Reacher felt borrowed from his performance as Ethan Hunt from the Mission Impossible movies. Reacher is more of an antihero, but other than that, they’re very similar.

In the supporting cast, Richard Jenkins plays Alex Rodin, Helen’s father and the D.A. prosecuting Barr. There’s daddy issues, but the movie never explains why or why we should care. They’re just another cliché thrown into the mix. David Oyelowo plays Emerson, a detective, and Michael Raymond-James plays Linsky, one of the bad guys. Werner Herzog made an appearance as Zec Chelevek and Robert Duvall played Martin Cash, the owner of a shooting range. But my award for best actor goes to Alexia Fast as Sandy. She’s a woman sent to bait Reacher. Though a small role, Fast was the only actor who worked for the paycheck. It’s a movie devoid of stellar performances.

Perhaps I should blame the writing. The screenplay by director Christopher McQuarrie didn’t offer much character development. Even the title character wasn’t much more than a cardboard cutout. Perhaps it’s fitting that some scenes took place on a shooting range, where you would expect such cutouts to be. Is this McQuarrie’s mishandling the source material, or does the absence of meaningful characterization come from Lee Child? Who knows? But I do remember that I praised McQuarrie’s handling of Mission Impossible: Rogue Nation (2015), so I know he’s capable of much better work.

Jack Reacher is a product. You go to the store and buy a product–say a cleanser for the kitchen sink–you expect it to clean the sink. Beyond that, you don’t much care about it. Jack Reacher is a product designed to entertains us for a couple hours. It does that. It’s an action movie that gives us action. It doesn’t offer much beyond that action, but that makes it a prefect movie for mindless entertainment. I imagine fans of the Jack Reacher novels are glad to have a movie franchise in his name. But for me: I’m not sitting at the edge of my seat waiting for the next Jack Reacher movie.