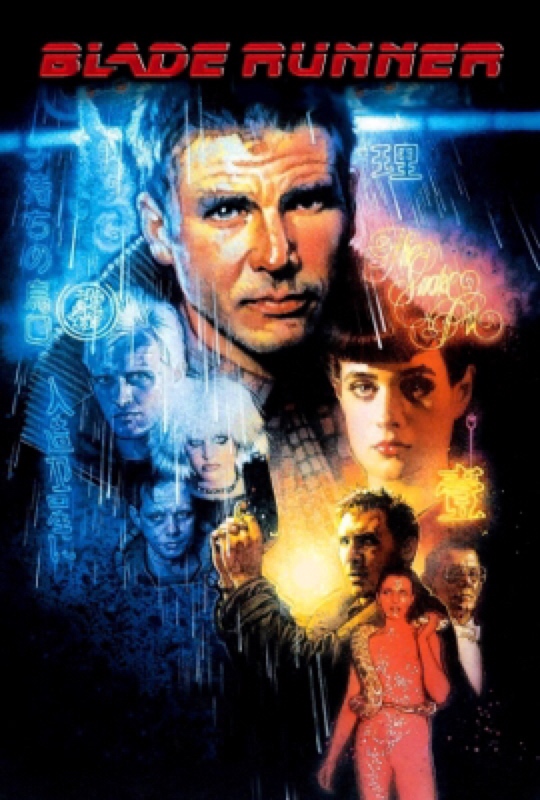 Though I don’t have a favorite movie, or even a list of favorite movies, there are several movies that stand out to me as being superior to the norm and worthy as being considered among the greatest movies ever filmed. It’s no hyperbole to say Ridley Scott’s 1982 film Blade Runner stands as such a film. From its acting to its photography, from its music to its stunning visuals, from its plot to its themes–it stands as close to prefection as any film can. Since I’ve never review it in this blog, I decided to review it in anticipation of seeing Blade Runner 2049. There has been several cuts of Blade Runner: the original theatical cut–unfortunately weakened by voiceovers–the director’s cut–which Scott wasn’t involved in–and the final cut–the true director’s cut. I know many fans argue about which cut is best, but I will not join that debate. Before writing this review, I watched the final cut, because it’s the one in my film library. Perhaps it deserves special attention, because it’s the cut Scott wants the film remembered by.

Blade Runner is an adaptation of Do Androids Dream of Electric Sheep by obscure science-fiction writer Philip K. Dick. I wrote obscure, because for most of his life, though he had his fans, he was one of those writers who lived in the back row of literature, always working, always writing great stories, but never achieve fame. Beginning with Blade Runner, Hollywood rediscovered this writer in the 1980s and had been adapting him to create some of our best movies every since. Novels and stories Dick wrote had inspired Total Recall (1990, 2012), Screamers (1995), Minority Report (2002), Paycheck (2003), Scanner Darkly (2006), and The Adjustment Bureau (2011). Dick’s The Man in the High Castle serves as the source of the television series by the same name (another Ridley Scott’s venture). Even several science-fiction movies not adapted from his works feel heavily influenced by him. I’m thinking, for example, about The Matrix (1999). I bet the Wachowskis were frequent readers of Dick. I’m also thinking about such movies as Donnie Darko (2001), Inception (2010), and Ex Machina (2014). Since of Philip K. Dick’s work I’ve only read Do Androids Dream of Electric Sheep, I know about his work more by reputation than experience. But I know he loved exploring the the theme MAN vs. TECHNOLOGY. I also know he loves writing what is best described by the modern vulgarity as MIND FUCKS.

For those of you who had never seen Blade Runner–do such people exist?–it tells the story of Rick Deckard, a Los Angeles police officer charged with hunting down replicants (androids) and retiring them. Retiring them is an euphemism for killing them. When four escaped replicants come to Earth, Deckard is pulled out of retirement to deal with this emergency. Harrison Ford, in one of his best performances, plays Deckard. Sean Young plays Rachael, his unwilling cohort, who is a replicant. Rutger Hauer stars as Roy Batty, the leader of the rogue replicants, who also include Pris (Daryl Hannah), Leon (Brion James), and Zhora (Joanna Cassidy). My award for best actor goes to Rutger Hauer. My award for best actor goes to Rutger Hauer is a sentence I’ve never thought I would have to write, but his protrayal of Roy inspires sympathy for the main antagonist. Can you empathize with a killer robot? The answer is yes, because Hauer’s Roy Batty is “more human than human,” more humane than the humans in the story. Hauer delivers the most memorable and iconic lines in the movie, which he improvised during the filming. Perhaps for no other reason than that, he deserves best actor. 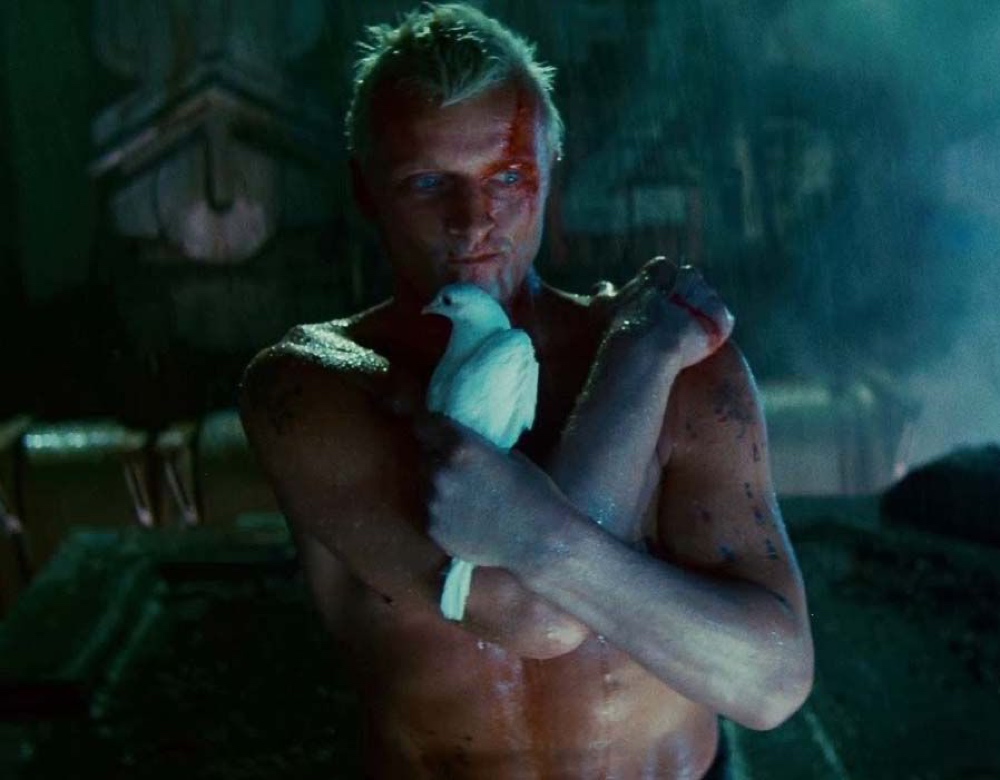 Blade Runner is a beautiful film. Cinematographer Jordon Cronenweth gave it a dark, atmospheric tone that is well-suited for the dreary dystopian future shown in the film. The score by Vangelis gives us a haunting background. In these reviews, I don’t give enough credit to the design crew, but I won’t make that mistake with Blade Runner, because the look of the movie is incredible. The sets are amazing and detailed–from Deckard’s overcrowded apartment to the boardroom at the Tyrell Corporation, where Deckard and Rachael meet, to the noodle shop where Deckard buys his evening meal. These places feel real in a way that movie places often don’t. The costumes were stunning, especially those wore by Young’s Rachael. Inspired by the fashion of the 1940s, costume designers Michael Kaplan ad Charles Knode gave her high-collared fur coats and tight, taper skirts, and soft, layered blouses. Even Young’s hairstyle deserve more praise than I wont to give hairstyles in film. At the risk of sounding shallow, seeing beautiful woman being beautiful is one reason I love going to the movies, and in Blade Runner Sean Young looks her best. Her natural good looks proved a fertile canvas for makeup artists, hairstylists, and costume designers to create their art.

Like in any science-fiction film, Blade Runner has special effects. After thirty years, those practical effects hold up better and more convincing than some of the CGI effects I’ve seen released this year. But these effects are less important in Blade Runner than in other science-fiction franchises like Star Wars, Star Trek, or the Alien series that Scott had taken over. Blade Runner is an actor’s film. Screenwriters Hampton Fancher and David Peoples joined with Ridley Scott to give us an action-packed but emotional film. Like any Scott film, it’s layered with thought-provoking themes, religious symbolism, moral dilemmas, and multiple interpretations. Fans debate whether Deckard himself is a replicant. The movie hints at the question without offering any definitive answer. It’s the type of mind fuck Philip K. Dick would’ve loved.

Science-fiction writers and filmmakers have a bad habit of dating the events in their stories. They should stop. According to the opening subtitle, Blade Runner takes place in 2019. Since that’s only two years away, I find myself worried that we won’t have fully functioning replicants by then. Worst! Where are the flying cars? I so want a flying car! In truth, though, in terms of flaws, that date is the biggest flaw in the movie. In its visuals, its story, its acting, and its directing, Blade Runner is a great movie. I would go so far as to say it’s a must-see movie. Ridley Scott and his cohorts gave us a vision of the future that is both dark and provocative. 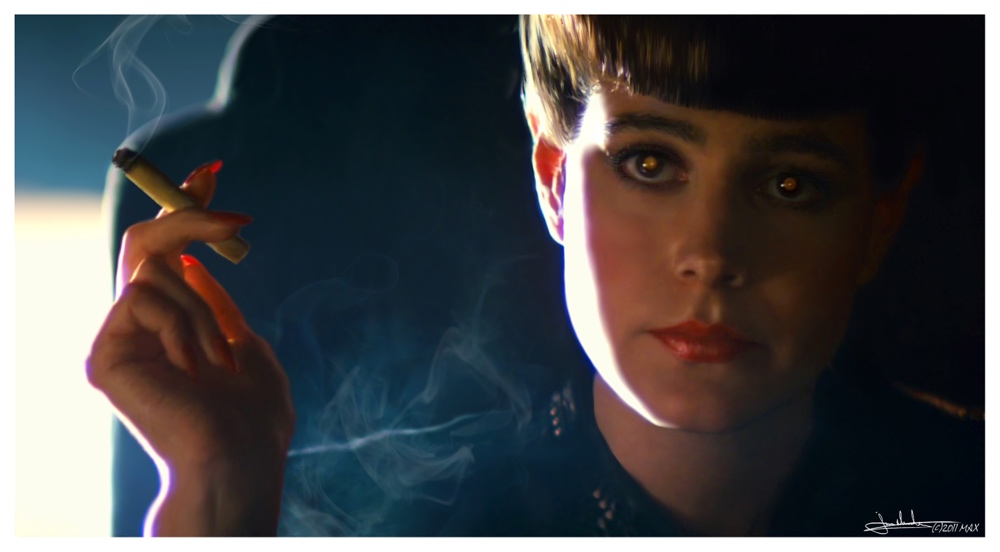