The Watch by Rick Bass

Home / The Watch by Rick Bass 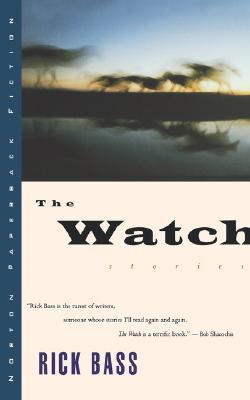 An aging recluse hires an unsuccessful bike racer to help him track down his missing father. An amateur hocky player redefines the rules of the game. A man grows a giant bass in his swimming pool with the hopes of winning a million dollars. These are some of the situations and characters you’ll encounter in Rick Bass’ The Watch.

Rick Bass was born in Fort Worth, Texas in 1958. The son of a geologist, he studied petroleum geology in Utah. He began writing during his lunch breaks, while working for a oil company in Jackson, Mississippi. He currently resides in Montana, where he continues to write. I first learned of Rick Bass while an English student at Eastern Washington University. That would’ve been in 1991 or 1992. He came to campus to give a reading. He read the first story of this collection, “Mexico.” It was entertaining and funny, and it inspired me to purchase the book. Over the years, I have read a story here and there, but it wasn’t until this year that I sat down and read the book from cover to cover.

There are ten quirky stories about a couple dozen quirky characters. As Bass had moved around the country, so do these stories. They are set in Texas, Montana, Utah, and Mississippi. They tend to be episodic rather than plot-heavy, focusing on the characters and their situations rather than on specific actions or results. Though the characters are unique, the conflicts they face are universal. For example, in “Wild Horses” we meet Karen, griefing her fiance’s death. In “Cats and Students, Bubbles and Abysses,” we meet a junior college professor, a frustrated writer, who hangs his hopes for literary success on one of his students.

The strength of these stories are the emotions they reveal. Though the conflicts in them are often subtle, they lead the characters through dynamic changes. Transformation is a theme, moving from one life stage to another, from one emotion to the next. For example, “Juggernaut,” my favorite story in the collection, is a classic coming-of-age tale. Now that summer is upon us, I think The Watch is a perfect book for the beach. The stories are light but literary, funny but insightful. I know I will revisit this book and the characters I’ve met in it again and again.