The Virgin Suicides by Jeffrey Eugenides 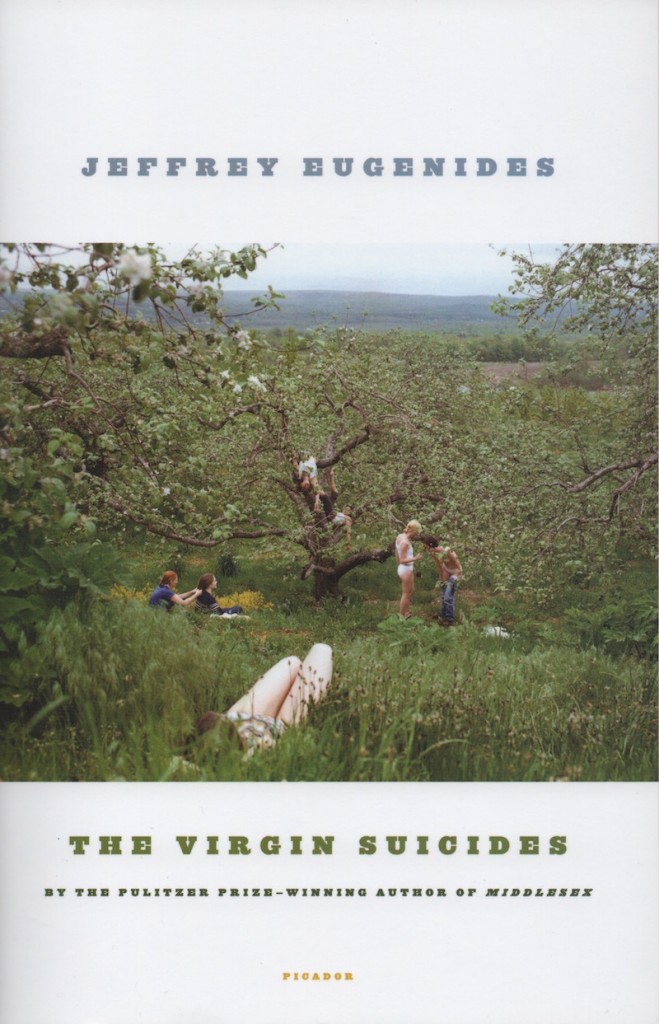 In a quiet, upper-class neighborhood in Groose Pointe, Michigan, a family tragedy draws the fascination of an anonymous group of boys and their parents. When the teenaged boys suffers their first angst of sexual desire, their eyes turned to the Lisbon girls. Five in number, ranging in age from 13 to 17, these blond beauties do not seem to be five individuals but one person with five bodies. When 13-year-old Cecilia kills herself, morbid curiosity joins with lust, and the neighborhood attempts to find purpose, meaning, and, most of all, a return-to-normal in the wake of this tragedy. Writing in in a lyrical, symbolic style, Jeffrey Eugenides, writes about the year following Cecilia’s death, “the year of the suicides,” and pulls us into a story that is in equal parts beautiful and sad.

The Virgin Suicides (1993) is the first novel I have read from Jeffrey Eugenides, but I promise you this, it will not be my last. He has written two others: Middlesex (2002) and The Marriage Plot (2011). Of Greek heritage, Eugenides grew up in Detroit and attended the University Liggett School, a private school in Groose Pointe. After high school, he attended Brown University and received his Masters of Arts from Stanford University. He currently lives in Princeton, New Jersey, where he teaches creative writing at Princeton University.

The plot of The Virgin Suicide is simple; it focuses on the grief of the Lisbon family following Cecilia’s suicide. Raised by overly protective parents, who isolate their daughters from the community at large, Cecilia survived a previous suicide attempt. When her doctor asked her why, she answered, “Obviously, Doctor…you’ve never been a thirteen-year-old girl.” That is all the explanation that we will receive for her suicide. Though, after she succeeded with her second attempt at suicide, the community would speculate her reasons–from harsh discipline to unrequited infatuation to the recognition that she was always the weird one–as so often in real life, the reason for suicide remains a mystery.

After her suicide, the surviving family–Mr. and Mrs. Lisbons, and their daughters Lux, Bonnie, Mary, and Therese–struggle to return to normal life. The quest for normalcy–whatever that is–is a major theme in this novel. For Mr. Lisbon, a math teacher at the local high school, it meant returning to work, and for his daughters, it meant returning to school, socializing with their peers, and attending the homecoming dance. As the school year passes, it becomes painfully obvious to both the Lisbon family and to the neighborhood that normal is no longer possible. In the end, the surviving daughters gave up on normalcy and joined Cecilia in suicide. This is not a spoiler but the very direction of the novel, apparent from the first sentence.

On the morning the last Lisbon daughter took her turn at suicide–it was Mary this time, and sleeping pills, like Therese–the two paramedics arrived at the house knowing exactly where the knife drawer was, and the gas oven, and the beam in the basement from which it was possible to tie a rope.

The narrator for this novel is the first person plural “we.” When I first realized this, I asked the natural question: Who are “we”? My answer: The boys of the neighborhood, those who lust after the Lisbon sisters. I expected to be able to attach names to them, to determine which of the boys were narrating the story, but though several boys are named, none stood out as being the narrators. That gave a sense that all of them are involved in the narration. Though critics had compared this narrative strategy to the Greek chorus, Eugenides denies this. In an interview with 3am Magazine, he said, “The traditional Greek chorus stands apart from the action, but the boys in The Virgin Suicides meddle in the action quite a bit….” By the end of the novel, I realized that we do not have to define “we,” and I felt grateful that the plural narrators remain anonymous. The we the narrators fuse with the we the reader, making us, those turning the page, the narrator.

A temporal distance exists in the narration; time has passed between the suicides of 1970s and the narration of the 1990s. As “we” struggles to tell story, they presents us with evidence–like Exhibit #1, a picture of the Lisbon house prior to the Cecilia’s suicide and descriptions of interviews with Mr. and Mrs. Lisbons, now divorced. They interview others, including each other, as they piece together this tale. Not only do they stand outside the house looking in, but also they stand as adults looking back on their teenaged years. By its nature, all fiction is voyeuristic, but whereas most novels chooses a subtle voyeurism, this novel thrusts it in our face, forcing us to peer through windows, peek over fences, and eavesdrop on arguments.

The best novels have texture; they have layers of meaning. The most superficial layer, of course, is the story. A happens, and then B happens. Though story is what keeps us turning the pages, it is not what stays with us after the last page. This novel explores several themes: grief, sexual angst, suicide, and normalcy. Though the setting is an upper middle-class neighborhood in Groose Pointe, there is a relevancy to the story that expands across the country. It is easy to imagine this novel being set in Harlem or on Park Avenue, in Beverly Hills or Watts. Or in the Spokane Valley neighborhood where I became a teenager.

I love the imagery of this novel; I considered it its greatest strength and the number one reason I want to read more by Jeffrey Eugenides. At times, it is subtle. In one passage, Eugenides describes automatic sprinklers turning on at the same time that EMS arrives in the Lisbons’ driveway. At other times, it is overt, like when the city Parks Department arrives at the scene to cut down the Lisbon’s elm tree. A beetle deadly to trees has inflected the tree, and the Parks Department hopes that removing the tree will save other trees. Eugenides saves the most dynamic and symbolic imagery for descriptions of the Lisbon house. As the story progresses, the house falls into disrepair, as if to create a visual image of the despair inside its walls.

Following the Homecoming dance, Mrs. Lisbon closed the downstairs shades. All we could se were the girls’ incarcerated shadows, which ran riot in our imaginations. Moreover, as fall turned to winter, the trees in the yard drooped and thickened, concealing the house, even though their leaflessness should have revealed it. A cloud always seemed to hover over the Lisbons’ roof. There was no explanation except the psychic one that the house became obscured because Mrs. Lisbon willed it to.

In real life, a person’s suicide forces more questions than it answers. Why? Even when the suicide left a note, that question is never answered in a satisfying or decisive manner. Why continues to haunts us. Why plagues our minds and forces us to ask where we failed. We talk about the person who commits suicide as “the victim.” That is fair but misleading, because a suicide has many victims. Everyone the suicide left behind is a victim. The Virgin Suicides examines the victims left behind by Cecilia’s suicide: Mr. and Mrs. Lisbon, the sisters, and the boys in the neighborhood. It is not surprising that, twenty years on, those boys still seek answers to the virgin suicides: In the end, they know that they, in part, are to blame.