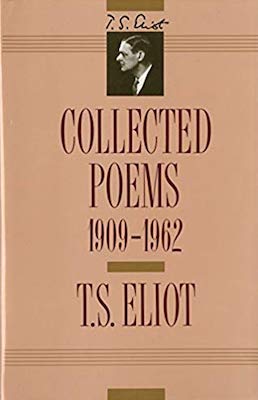 At my first creative writing class, the grad student who taught it asked how many of us write fiction. All hands went up. How many of you consider yourself fiction writers? A few hands dropped, but most stayed up. How many write poetry? Most of us kept their hands up. How many of you consider yourself poets? All but a few hands dropped–mine included. There’s a certain romance in being a writer, but being a poet is exotic. A prose writer, like myself, considers language a good friend, but a poet is its intimate lover. As I shake its hand, the poet caresses its waist. My peck on the cheek becomes the poet’s French kiss. I won’t develop the analogy into obscenity, but I imagine you understand the point. Among the many lovers language has had, T. S. Eliot is one of the most passionate and skillful.

T. S. Eliot was born in St. Louis on September 22, 1888. When he was 25, he moved to England, where he spent the rest of his life. In 1927, he became a British subject and renounced his American citizenship. Because of this biography, both America and England claim him as part of their literary heritage. Is he an American poet? Or an English poet? I’ll let others debate those questions. Some poets feel rooted in their homeland. Walt Whitman, for example, was an American poet. Every poem he wrote is a paean to America and its democracy. Other poets transcend national boundaries to become poets of the world. T. S. Eliot personifies this.

In making that claim, I’m thinking of his greatest–in my opinion–poem: The Waste Land. Published in 1922, it’s a bleak vision of the world he saw during The Great War and in its aftermath. It’s a wonderful poem, moving and chilling, beautiful but depressing. One day in these pages, I’ll write more about it, but today I’m writing about The Love Song of J. Alfred Prufrock. This is my first poetry review, and Prufrock stands as a good introduction to poetry. It’s also a good introduction to Eliot because it’s his first published poem. It first appears in the June 1915 issue of Poetry: A Magazine of Verse. Two years later, it appeared in a pamphlet called Prufrock and Other Observations. Dissed at the time, because it broke many poetic conventions, it’s now considered one of the greatest poems ever written.

When the evening is spread out against the sky

And sawdust restaurants with oyster-shells:

To lead you to an overwhelming question…

Let us go and make our visit.

As a character, J. Alfred Prufrock is a lonely man, perhaps not old, but clearly no longer young. He makes his way through the social intercourse of afternoon teas and soirees. He’s self-conscious of his balding head but proud of the pin that holds his tie. Lonely and pessimistic about his romantic life, he continues his search for a mate.

Have known the evenings, mornings, afternoons,

I have measured out my life with coffee spoons;

I know the voices dying with a dying fall

Beneath the music from a farther room.

I love reading poetry, but it often gets pushed aside by other life pursuits and requirements. Sometimes I go months, even years, without reading poetry. When I return to it, I have a small list of poems that I re-read to reassure myself that these poems still exist. Prufrock is often the first poem I read from that list. I’ve read it, perhaps, a hundred times during my life, but it never ceases to lose its beauty and wonder. It never fails to move me.

As a lifelong bachelor, I relate to Prufrock. I’ve been to my share of gatherings and outings in that unfulfilled quest to someone to love. I know his loneliness and frustration. I know what it’s like to be self-conscious of a receding hairline while being proud of my tie. Prufrock speaks to this with a beauty I could never master. No surprise with this, because this is the job of poetry, to help us understand the inexplicable.

Yes, I write poetry, by which I mean, I sometimes write in verse. But do I really write poems? Have I written anything that begins to explains the inexplicable? Have I even come close to achieving what Eliot achieved with Prufrock? Since I doubt that, when the grad student teaching my creative writing class ask if I considered myself a poet, I dropped my hand. I’m being too demanding on myself, I know, because The Love Song of J. Alfred Prufrock is a perfect poem, and one doesn’t have to write perfection to write meaningful poetry. But T. S. Eliot is a poet. Me? I’m just a writer and happy to be that.