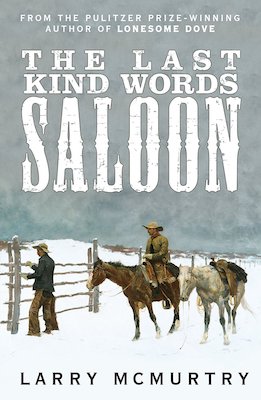 Where do you begin with a writer like Larry McMurtry?

His name, I fear, is not a household name, but his work–from The Last Picture Show (1966) to Lonesome Dove (1985) to the movie Brokeback Mountain (2005)–is well-known. When I was a young man, loving literature and always craving new writers, I would go into a bookstore, to the fiction section, and start at the writers whose name begin with A and worm through the shelves to reach those whose names begin with Z. It was during such an exploration where I discovered the first McMurtry novel I would read. It was All My Friends Are Going to be Strangers (1972). It’s not one of his better-known novels, but since buying it, I’ve read it three times, and I mean to reread it in the coming months. In the afterword, Raymond L. Neinstein tells us: “All My Friends Are Going to be Strangers is a regional novelist’s farewell to regional literature.”

It’s a fine sentiment, a poetic line, but I fear it misses the point. I don’t mean to contradict Neinstein, a McMurtry scholar (they exist), but he wrote that afterword in 1981, and now that we have a few more decades of McMurtry’s work, and a dozen more novels, I think we can glean a more accurate description of his work. McMurtry teaches us that regional literature is national literature.

He never left the West. His characters are rooted there like the small towns that often serves as his settings. They are ranchers and cowboys, gunslingers and drifters, gamblers and high school football stars. Maybe they live in the Old West or the Modern West, but either way, they carry the landscape inside of them. Place matters. And the places we choose to live matters most. Whether the Western landscape shaped his characters, or whether his characters were the type to choose the Western landscape–a little of both, I think–McMurtry’s settings and characters entwine together to create stories that feel regional and American.

He was trying to learn a new virtue: patience. He was known all over the West for exactly the opposite quality: impatience; and, in his impatience, he was known to be exceedingly profane–and loud to boot. His own wife, Mary Goodnight, had threatened to leave him twice because of the cussing, although in neither case was it her he was cussing.

Published in 2014, The Last Kind Words Saloon follows Wyatt Earp and Doc Holliday as they move through the West in a futile effort to find something to do. Perhaps it’s a lack of motivation. McMurtry’s Earp is lazy, and Doc Holliday prefers gambling to working. They hang out outside The Last Kind Words Saloon, owned by Earp’s brother Warren, and watch the comings and goings of people, both famous and inconsequential. Among them is Charlie Goodnight, a Texan rancher, who had chosen, against the odds, to convert the Texan Panhandle into cattle land.

From stampedes to sand storms to the infamous gunfight at the OK Corral, our heroes seem quite unheroic. Earp beats his wife and boozes at saloons not owned by his brother Warren. Doc Holliday hangs around Earp for no particular reason, as he considers shooting people for silly reasons like not liking their hat. In an epigraph, McMurtry said he chose to write the legend rather than the history of these characters, but methinks he wrote neither legend nor history. In the same epigraph, he called it a “ballad in prose,” and that feels more accurate to me. He gives us a Wyatt Earp and Doc Holliday like you will never meet anywhere else, not on their Wikipedia pages or in the movies that glorify their lives.

I harp about Earp and Holliday because The Last Good Words Saloon both begins and ends with them. But the novel is just as interested–if not more interested in–Charlie Goodnight, another historical character. We meet other legends, like Buffalo Bill Cody. We also meet fictitious characters like San Saba, a displaced woman from Turkey who finds herself running a brothel in Texas. We meet several characters who might be historical figures or invented characters, but who seem to entwine with the Western mythology. They are cowboys and trappers and newspaper reporters.

Wyatt fired three times, shattering no bottles. Annoyed, he threw his pistol at the line of bottles, knocking over three. Then he took a derringer out of an inner pocket and shattered two, to his surprise.

Larry McMurtry was born on June 3, 1936; he grew up on a Texan ranch near Archer City. He received a BA from the University of North Texas in 1958 and an MA from Rice University in 1960. He owned a used bookstore in Washington DC and a second one in Archer City, Texas. With over 400,000 titles, it was considered the biggest used book store in America. Since he was friends with Ken Kesey, Kesey and the Merry Pranksters made McMurtry’s home a stop on their famous bus trip across America. In 2011, he married Kesey’s widow, Norma Faye. The Last Good Times Saloon is the last novel he’s written, but since he’s still writing, maybe there’s more to come.