The Hound of the Baskervilles by Sir Arthur Conan Doyle

Home / Crime Thriller • Sherlock Holmes / The Hound of the Baskervilles ... 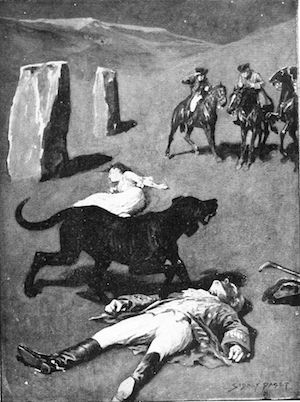 A beast haunts the moors of Devonshire–a giant hound, ghostly in appearance, demonic in purpose. It is the curse laid on the Baskerville family by the evil done by one of its ancestry. The ancestral lord abducted a local girl and planned to rape her, but when she escaped, he hunted her with his hounds. Both the lord and his victim met their deaths on the moors, and when their bodies were discovered, a devil hound was feasting on his body. Since that night, the Baskervilles feared the hound, and the locals often heard it howling in the night. For centuries, the curse lay over the district. But when Sir Charles Baskerville met his death on the moors, his doctor visited Sherlock Holmes and asked the famed detective to look into the curse. He wanted Holmes to protect the new heir, Henry Baskerville, arriving in London that day, en route to Baskerville Hall.

The company had come to a halt, more sober men, as you may guess, than when they started. The most of them would by no means advance, but three of them, the boldest, or it may be the most drunken, rode forward down the goyal. Now, it opened into a broad space in which stood two of those great stones, still to be seen there, which were set by certain forgotten peoples in the days old. The moon was shining bright upon the clearing, and there in the centre lay the unhappy maid where she had fallen, dead of fear and of fatigue. But it was not the sight of her body, nor yet was it that of the body of Hugo Baskerville lying near her, which raised the hair upon the heads of the three dare-devil roysterers, but it was that, standing over Hugo, and plucking at his throat, there stood a foul thing, a great, black beast, shaped like a hound, yet larger than any hound that ever mortal eye has rested upon.

The Hound of the Baskervilles, published in book form in 1902, is the fifth Sherlock Holmes book written by Sir Arthur Conan Doyle. It is a prequel to many of the stories that came before it, especially to “The Final Problem,” the last short story of the proceeding book, The Memoirs of Sherlock Holmes (1893). Doyle, tired of writing about Sherlock Holmes, took eight years off from the character. He intended never to write about Holmes again; he expected “The Final Problem” would be the last Sherlock Holmes story he would have to write. But public demand craved more of Sherlock Holmes. So he picked up his pen and wrote The Hound of Baskerville. It was serialized in The Strand in 1901 and released the next year as a novel.

I am reading all of Doyle’s Sherlock Holmes novels and short story collections in the order they first appeared in book form. Altogether, there are nine books–four novels and five short story collections. Once a month, I will read and review one book. By that schedule, I should’ve written this review in January, and I apologize to my readers, especially to those following this project, for the delay. January and February were productive months for me, but not for my blog. I started writing a new novel, and focused on that project, I neglected my blog. But I’m back to making regular blog posts, and I’m resuming this project. Again, my apologies for the delay.

Of all the Sherlock Holmes books I’ve read so far, The Hound of the Baskerville is my favorite. It is tense and mysterious, dark and foreboding. In the other stories and novels, Holmes sought to solve a fait accompli. Murder had been done, and Holmes must use his deductive skills to learn the murder’s identity. Though The Hound of the Baskerville began with a death, perhaps a murder, Holme’s purpose is not to solve the mysterious death–though that is part of it–but to prevent the same fate from befalling Henry Baskerville. This added tension and raised the stakes. It heightened the drama, adventure, and sense of danger that is inherent in all Sherlock Holmes books. Unlike the other Holmes books by Sir Arthur Conan Doyle, I had read The Hounds of the Baskervilles more than once. In fact, it tends to be a novel I read once every year or two. Without a doubt, it is one of the best detective novels every written.

The moor surrounding Baskerville Hall, as described by Doyle, is a dark and dangerous land. Filled with swamps, craggy hills, and ancient ruins, it was home to few people and hospitable to none. One resident, a naturalist named Stapleton, told Dr. Watson about how he once saw a wild horse swallowed by the waters of a bog. Often at nights, the locals heard eerie cries in the darkness. Watson, himself, heard such a cry. The locals believed it was the demonic hound of the Baskerville curse. As if that weren’t bad enough, an escaped murderer used the moor as his refuge from the authorities who hunt him. And standing in the moor is the dark and spooky Baskerville Hall and the yew alley where Sir Charles Baskerville met his death.

The avenue opened into a broad expanse of turf, and the house lay before us. In the fading light I could see that the centre was a heavy block of building from which a porch projected. the whole front was draped in ivy, with a patch clipped bare here and there where a window or a coat of arms broke through the dark veil. From this central block rose the twin towers, ancient, crenelated, and pierced with many loopholes. To right and left of the turrets where the more modern wings of the black granite. A dull light shone through heavy mullioned windows, and from the hight chimneys which rose from the steppe, high-angled roof there sprang a single black column of smoke.

We expect detective novels to be page-turners. We expect them to be books we don’t want to put down. Doyle fulfills that expectation with every Sherlock Holmes installment, but he fulfills it best with The Hound of the Baskerville. It is arguable the most adopted of the Holmes’ mysteries. It had been adopted into plays, movies, television mini-series, and even a video game. Four books came before it, and four books followed it. It is the very center of the Sherlock Holmes canon. I do not know what I’ll find as I read forward, but I doubt that I’ll find any tale darker and more exciting than The Hound of the Baskerville.