The Adventures of Huckleberry Finn by Mark Twain

Home / Classic Literature • The American Novel / The Adventures of Huckleberry ... 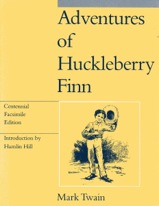 “All modern American literature comes from one book by Mark Twain called Huckleberry Finn,” Hemingway tells us, but John Wallace says, “The reading aloud of Huck Finn in our classrooms is humiliating and insulting to black students.” From the moment it was published, The Adventures of Huckleberry Finn inspired both praise and condemnation. Despite Mark Twain’s humorous disclaimer that the book was written without motive, moral, or plot, it is hard to imagine, upon reading it, that he did not anticipate he would incite debate and discussion about racism in American.

Samuel Clemens was America’s first superstar novelist. He stole the pseudonym Mark Twain from a lessor writer whose writing he loathed, and with it, he established a reputation for humorous writing that survives to this day. Though as a boy, his family had owned slaves, as an adult, he detested slavery. After the Civil War, after the Emancipation Proclamation, he grew concerned about the epidemic racism that diseased this nation.

Huckleberry Finn is the story of two runaways–one a fourteen year old boy, Huckleberry Finn, escaping his abusive father; the other an escaped slave named Jim. Huck Finn narrates their story, and he does it in the vernacular of his day, which includes–to the pain of modern readers’ ears–frequent use of nigger. Make no doubt about it: If you read this book–unless you’re a Neo-Nazi or a member of the Ku Klux Klan–you will be offended. The offense comes not only from the racist term but also from the stereotypical portrayal of Jim and all the blacks in the story. Huck Finn lives in a slave-owning culture, and he suffers from the racism inherent in that culture.

Huckleberry Finn’s physical journal is down the Mississippi River, but as he travels down the river, he experiences an emotional or moral journey inspired by his growing friendship with Jim. Jim calls Huck Finn his best friend, and though Huck never reciprocates the compliment, he clearly considers Jim his best friend. Huck faces a moral dilemma, and in that dilemma and his response to it, he’s forced to examine his own racism and the racist culture he has always taken for granted.