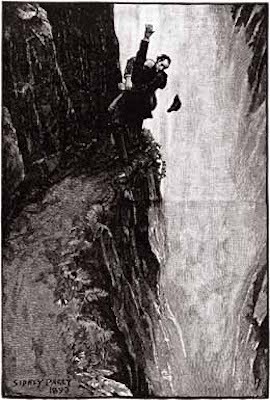 One doesn’t have to dive deep into Sherlock Holmes research before he learns that Sir Arthur Conan Doyle grew to resent the character and regret his success. He began publishing Sherlock Holmes tales in 1886, and by 1893, when these stories that make up The Memoirs of Sherlock Holmes appeared in The Strand, Doyle was ready to abandon Holmes and turn his mind to other projects. But the public continued to crave tales of Holmes, and the publishers demanded more and more adventures. Doyle, a professional, relented and gave the reading public what they demanded.

The stories in The Memoirs of Sherlock Holmes display this contest between the reluctant writer and the demanding public. Some of the stories feel lazy. I’m thinking, in particular of “The Stock-Broker Clerk,” which employed the same set-up–call it a device–as we saw in “The Red-Headed League” from The Adventures of Sherlock Holmes. But the further one read in Memoirs, the better the stories became. They grew more interesting and more exciting. And they grew more dangerous, until the last story that describes Holmes’ conflict with arch villain Professor Moriarty. When Doyle wrote “The Final Problem,” he expected it would be the last word he would every have to write of Sherlock Holmes.

Little did he know, he was just beginning.

The Memoirs of Sherlock Holmes is only the fourth of nine books published by Doyle featuring his detective. Though Doyle thought to put Holmes to his rest in 1894, he would find himself writing Holmes stories for the rest of his life. Though Sherlock Holmes was and remains to be Doyle’s most famous and successful literary creation, he also wrote historical novels, dozens of short stories, and stage plays. Critics consider his best writing to be the historical novels published between 1888 and 1906. His short story “J. Habakuk Jephson’s Statement” helped to popularize the mystery of the Mary Celeste, a ship found adrift without crew or passengers. I think I can imagine how Doyle felt, as the public demanded more and more Sherlock Holmes stories, while the author craved to focus on projects he deemed more important and better deserving of his and the reader’s time.

There was a time in my life when I thought Sherlock Holmes was a real person, a historical detective who redefined criminal investigation. I suppose everyone had wondered the same thing as a child, but I was in my early teens before I realized he was a fictitious character. When I learned it, I felt disappointed. There was a romance in my mind about Holmes, a romance that, in part, required him to have been real. It wasn’t the worst disillusion of my life, but for decades after it, I abandoned Holmes. Sigmund Freud might be able to understand why, but I’m at a lost to explanation. I love fiction. I love fiction so much I live in a fictitious world. Though I work in the hotel industry, I consider my real career is as a fiction writer. I spend most of my free time reading fiction, and when I’m not reading, I’m watching movies and television shows featuring fictitious characters in fictitious situations. So why did discovering Sherlock Holmes to be a fiction cause me to abandon him?

I’m done abandoning him. I’m currently reading all of Sir Arthur Conan Doyle’s Sherlock Holmes canon in the order that the stories were published in book form. I began this project in August by reading and reviewing A Study in Scarlet (1888). Though my intentions was to read and review one book a month, it wasn’t until October when I reviewed The Sign of Four (1890). Last month, I reviewed the first collection of short stories, The Adventures of Sherlock Holmes (1892). This month, it is The Memoirs of Sherlock Holmes (1894). It features the stories published in The Strand in the last half of 1882 and the first half of 1883. Though The Strand published twelve stories, the collection include only eleven. “The Adventure of the Cardboard Box” is left out of Memoirs, but it appears in His Last Bow (1917).

As Doyle felt ambivalent about his detective, I feel ambivalent about this collection. It began strong with “Silver Blaze,” a story about a stolen race horse and the murder of its trainer. This story contains one of the most quoted dialogue that Sherlock Holmes ever gave us.

In “The Yellow Face,” Doyle dabbled with the theme of racism, and the story is worth reading for that purpose. But the third story of the collection, “The Stock-Broker Clerk,” irked me, because it felt too familiar to “The Red-Headed League” from the last collection. No doubt, it is the weakest story of this collection, but despite this, it had a dramatic ending that is worth experiencing. Though the pattern of the Sherlock Holmes stories involves Holmes including his friend, Dr. Watson, in on his adventures, which Watson, a witness to the events, writes about afterwords, two stories–”The ‘Gloria Scott‘” and “The Musgrave Ritual”–break this pattern. In these stories, Holmes recounts the story to Watson as cases he had worked prior to meeting the doctor. “The ‘Gloria Scott‘” is significant, because Holmes calls it his first criminal case, the case that convinced him he wanted to be a detective. In “The Greek Interpreter” we meet Holmes brother, Mycroft. And in “The Final Problem” we meet Professor Moriarty, Holmes’ nemesis.

Though this collection doesn’t feel as focused as The Adventures of Sherlock Holmes, there are too many excellent stories in this book to ignore. Even the stories that are less than interesting are still worth reading, if for no other reason than because of the insight they give us into Holmes personality and life. Though I recommend the reader read all of these stories, as I did with The Adventures of Sherlock Holmes, I will tell my three favorite stories. They are: “Silver Blaze,” “The Musgrave Ritual,” and “The Final Problem.” But don’t cheat yourself by skipping the others. Even the weakest story, “The Stock-Broker Clerk,” has its drama.