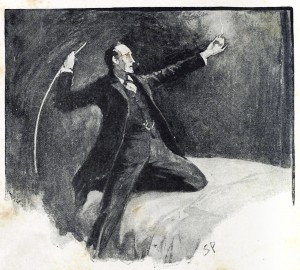 I close my eyes and imagine Sherlock Holmes. I see a tall, thin man, a long hooked nose, and sculpted cheeks. He had deep-set eyes and thin lips. Both his arms and legs are long and lanky. His demeanor is serious, humorless, even stoical. Though he enjoys explaining how he came to the solutions to the mysteries he investigates, it is always with a certain disdain for his listeners and their inferior intellects. He wears a satin dressing gown, ankle length, and he has an ascot wrapped around his neck and tucked into the dressing gown. He sits in front of a fire and smokes a pipe. This image of him is so vivid it feels as if I’m recalling a memory of a long lost friend. But where does it come from?

Elements come from the pages of Sir Arthur Conan Doyle’s Sherlock Holmes stories. Other elements come from the illustrations of Sidney Paget that appeared in The Strand to accompany the stories. Much of it comes from a photograph I had seen of Sidney Paget that made me wondered if he had modeled Holmes after himself. (Rumors at the time stated he modeled Holmes on his brother.) Other elements come from Basil Rathbone (1982-1967), who portrayed Holmes in fourteen American-made films. None of it comes from Robert Downey, Jr., who recently starred as the detective in two movies. His portrayal of Sherlock Holmes, though entertaining, conflicts so much with my imagination that I felt outraged.

How dare they ruin Holmes!

When the outrage waned, I wondered: Was it justified?

Since it had been decades since I had read any Sherlock Holmes stories–not since I was a kid–I realized I had no claim to the detective. I realized my image of Holmes was more influenced by popular depictions of him than by Doyle’s writing. I read several reviewers who defended Downey’s Sherlock Holmes as being closer to Doyle’s detective than the more classic movie depictions. This motivated me to start a project that I’ve been considering for years. It is time to read Doyle’s Sherlock Holmes canon.

Once a month until I finish the canon, I will read and review one of Sir Arthur Conan Doyle’s Sherlock Holmes books. In August, I posted my review of A Study in Scarlet, and in October, I posted my review for The Sign of the Four. (Unfortunately, I missed September.) Along with four novels, Doyle’s detective appeared in fifty-six short stories, which had been collected into five books. The Adventures of Sherlock Holmes, published as a book in October 1892, is the first short story collection and the third Holmes book to be published. It contains twelve stories, which first appeared in the monthly magazine The Strand from July 1891 to June 1892. Adventures is the topic of this month’s review.

George Newnes (1851-1910), a British publisher, founded The Strand in January 1891, and in July of the same year, he began publishing Doyle’s Sherlock Holmes short stories. The magazine soon became a popular literary magazine in England, with these stories helping to establish the magazine. Though Doyle knew success with his two proceeding novels–A Study in Scarlet and The Sign of the Four–it was his stories in The Strand that established Holmes as the iconic detective. Since the magazine’s circulation hovered around 500,000, he was reaching a broader audience than ever before. It seems synergic, the way the magazine and Sherlock Holmes contributed to each other’s popularity. Of course, Doyle wasn’t the only writer to contribute stories to the magazine. It published works by such literary heavyweights as H.G. Wells, Agatha Christie, P.G. Wodehouse, and Rudyard Kipling. Winston Churchill also published in the magazine. Even Queen Victoria got into the act. She contributed a sketch of one of her children. Though the original magazine went out-of-print in the 1950s, it was revived as a quarterly magazine in 1998, based in Michigan, and continues to publish today.

“As a rule,” said Holmes, “the more bizarre a thing is the less mysterious it proves to be. It is your commonplace, featureless crimes which are really puzzling, just as a commonplace face is the most difficult to identify. But I must be prompt over this matter.”

In writing these stories, Doyle used his favorite narrator, Dr. John Watson. At the end of The Sign of the Four, Watson announced he would marry. Chronologically, some of the adventures described in these stories happened after Watson’s married and moved out, but in several cases, he referenced his “notes” about the various problems that had faced Holmes while Watson still lived at 221B Baker Street. The plot of these stories follow a similar outline: They begin with a long exposition in the form of a dialogue, in which the crime or problem is laid out; Holmes then investigates and discovers the solution to the mystery. These are not Agatha Christie’s styled mysteries, in which the reader is challenged to puzzle out the solution before the detective. They are closer to the modern police procedural stories, where the tension and suspense grows as the detective zeros in on the villain.

In these stories, we encounter a Bohemian king fearing blackmail, a young man accused of murdering his father, an engineer who brutally lost his thumb, and a young woman who fear she’ll soon suffer the same death as her twin sister, who had died two years earlier. In “The Red-Headed League,” we meet the world’s most gullible red-headed pawn broker, but we also learn that Sherlock Holmes isn’t just a brilliant detective. He is also a man of action and danger. In “A Case of Identity,” a young woman searches for her missing fiancé, and in “The Noble Bachelor,” a newly married man searches for his missing bride. Are these stories related? Did the fiancé and bride run off together? I’ll give nothing away; you’ll have to read them to find out.

And I hope you do read them. The stories are enjoyable. Each took me between thirty to sixty minutes to read. Though I am constantly reading, I am a slow reader. I think most people would find each story a good way to kill a half hour. As you would expect in detective stories, each contains a mystery, but there is also drama and comedy to be found these pieces. Holmes is not above laughing at himself. Nor is he infallible. He failed to achieve his objective in at least two of these stories, and in at least two others, the criminals escaped arrest. We also learn that Holmes suffers, in some circumstances, questionable ethics.

Sherlock Holmes is a flawed hero.

But I prefer him so. Over the years since Doyle introduced this character, a certain mythology had developed around Holmes. We dress him in a deerstalker hat and an Inverness cape, smoking a Calabash pipe and staring through a large magnifying glass. The magnifying glass is a staple of his paraphernalia; he always has it on him, and he uses it frequently. But in reading these stories, I learn that Holmes, like most men of his time, wore different hats and jackets on different occasions, and like all pipe smokers I know, he owned an arsenal of pipes to smoke. Though I had read the first three books of the canon, I have yet to encounter a Calabash pipe.

As the outfits in the books varies from the popular depiction of Holmes, so is his personality different from the popular depiction. Recently, due to the Robert Downey Jr. movies, I think that popular depiction has changed, but traditionally, Holmes had been depicted as a calculating stoic. More brain than body. Devoid of emotions. But in these books, I’m learning that he has a well-developed sense of humor, enjoys boxing as his sport, and has strong empathy for his clients and the problems they face. His idea of justice isn’t always the same as court justice. Above everything else, Holmes is an intellectual, and what intellectual doesn’t recognize the conflict between what is right and what is legal?

TO SHERLOCK HOLMES she is always the woman. I have seldom heard him mention her under any other name. In his eyes she eclipses and predominates the whole of her sex. It was not that he felt any emotion akin to love for Irene Adler. All emotions, and that one particularly, were abhorrent to his cold, precise but admirably balanced mind. He was, I take it, the most perfect reasoning and observing machine that the world has seen, but as a lover he would have placed himself in a false position. He never spoke of the softer passions, save with a gibe and a sneer. They were admirable things for the observer— excellent for drawing the veil from men’s motives and actions. But for the trained reasoner to admit such intrusions into his own delicate and finely adjusted temperament was to introduce a distracting factor which might throw a doubt upon all his mental results. Grit in a sensitive instrument, or a crack in one of his own high-power lenses, would not be more disturbing than a strong emotion in a nature such as his. And yet there was but one woman to him, and that woman was the late Irene Adler, of dubious and questionable memory.

As always with a short story collection, I discovered that not all stories are created equal. Though I was never bored in reading these stores, some stories interested me more than others. They were more dramatic, more suspenseful, more dangerous. Crime wasn’t always the root cause of mystery in this collection, but when I read a detective novel, I want the detective to be investigating a crime. I’m funny that way! I won’t tell you which stories left me feeling less than satisfied, but if, instead of reading the entire collection, you choose to pick and choose which stories to read, I’ll recommend my three favorites. They are (in the order they appeared in the collection): “A Scandal in Bohemia”, “The Boscombe Valley Mystery,” and “The Speckled Band.” I’ll give honorable mention to “The Engineer’s Thumb” and “The Copper Beeches.” But in truth, I think you would do yourself good service to read all twelve stories.

Since Doyle’s Sherlock Holmes stories are in the public domaine, several publishers are distributing them. I purchased my Kindle version of The Adventures of Sherlock Holmes at Amazon for 99¢. Small price to pay to sign up for adventures that will take me, among other places, into a dining room of the nobleman, the homes of the wealthy, and an opium den run by a Lascar, and have me witnessing Holmes battles of wits with bank robbers, murderers, jewel thieves, coiners (counterfeiters), and even the American terror organization, the Ku Klux Klan.

Winter is upon us. Long cold nights lie ahead. Where I live, that means rain and fog and wind. It’s the perfect climate for reading The Adventures of Sherlock Holmes.