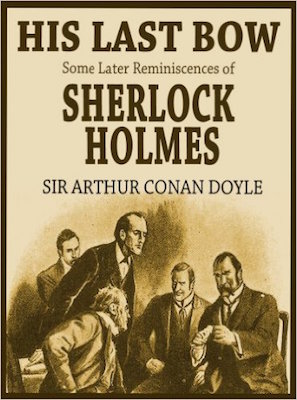 Imagine an elderly man, sitting in a parlor before a fire, rocking in a chair, and telling you stray stories about his adventures as the comrade to a famous detective. The detective is now retired in obscurity–a beekeeper, we are told–but the truth of his many mysteries have yet to be told. So now the man in the rocking chair sets out to tell you. No doubt, its a dark, wintery night, for the long nights of winter is the perfect time for such yarns. He doesn’t tell you these stories in chronological order; he tells you them as they occur to him. As such, he tells the stories of the detective’s younger years, his middle years, and his senior years. Though they are interesting stories, they are the lessor-known cases of the famed detective. But they are worth knowing, and our elderly gentleman–Dr. John H. Watson by name–tells them. That is the tone of His Last Bow. It’s subtitle is Some Later Reminiscences of Sherlock Holmes. In that title, I find the word reminiscences to be the most telling word. In the earlier books, we have the sense of Watson working with Holmes even as the stories were being told. In His Last Bow, Holmes’ days as an active detective are through, but so vast was his career that Watson still have stories to tell.

It is impossible to think of this period without thinking of World War I. That war began in July 1914, and for the next eight years, Europe, England with her, would tear itself apart. It was under the shadow of this approaching war, and the war itself, when Doyle penned these stories. Several times in the past, he tried to lay his famed detective to rest. He closed The Memoirs of Sherlock Holmes (1894) with “The Final Problem,” a not-so-subtle hint that he was done writing about Sherlock Holmes. And he opens the final story of The Return of Sherlock Holmes (1905) with another strong suggestion that it will be the last Sherlock Holmes story. Though I have no evidence to suggest so, I like to think that, due to the war, Doyle felt a patriot duty to write these stories, especially “His Last Bow.”

“What is the meaning of it, Watson?” said Holmes solemnly as he laid down the paper. “What object is served by this circle of misery and violence and fear? It must tend to some end, or else our universe is ruled by chance, which is unthinkable. But what end? There is the great standing perennial problem to which human reason is as far from an answer as ever.”

The book opens with a preface, written by “Dr. John H. Watson,” that tells us that Holmes is still alive but retired. He tells us that Holmes lives near Eastbourne and divides his times between “philosophy and agriculture.” He suffers from rheumatism. Though retired, as war approached, he returns for one last case, “His Last Bow.” This preface set the tone for the entire book; it reminds us that this is a book of reminiscences. Do not let that deter you from reading it, because these eight stories are interesting and fun stories to read. They are worth reading not only for the entertainment value but also as means of completing our picture of Sherlock Holmes.

In these stories, a docile elderly lady receives a box containing two severed ears, an independent lady goes missing in Switzerland, and Holmes investigates the murder of two people in what the newspapers call the “Cornish Horror.” Holmes broaden his reputation by battling American gangsters, international spies, and political assassins. The Holmes presented by Dr. Watson in these stories is just as calculating as in previous works, but he is more forthcoming to Watson. He talks about the cases, the direction his mind, and the questions or problems still not clear to him. This allows for both more tension and better pacing. As we know more about the cases, we know more about the dangers, and have more reason to fear for the safety of Holmes, Watson, and their clients. It also negates the need for an epilogue that explains how Holmes solved the case. So now the final scene is the climatic scene. Once the villain is caught, the story is over. Just as it should be.

“The Last Bow” is an interesting story, because for the first time, Dr. Watson is not the narrator. Doyle wrote this story in a 3rd person narration that shifts viewpoint during the story. That shift of viewpoint is clumsy, the weakest passage in the book, but the story is still wroth reading. Though it is not the best story in the collection, it allows the reader to see Holmes though a viewpoint other than Dr. Watson’s. It also places Holmes at the wheel of a Ford. As such, it is a nod to changing times. Whether intentional or not, the tone is sad. Gone are the days when Watson and Holmes follow a trail in London fog. As the nature of the world was changing, so was the nature of crime. Holmes, though foreshadows the direction of modern criminal investigations, seems a detective for the 19th century. I confess that this sadness might be coming from me rather than from the words on page, but there is something inherently sad about reminiscing. It’s an admission that the best is behind you, that age, the most brutal gatekeeper, exacts it’s toll from even the best of us.

“You then went to the vicarage, waited outside it for some time, and finally returned to your cottage.”
“How do you know that?”
“I followed you.”
“I saw no one.”
“That is what you may expect to see when I follow you.”

No doubt, in naming this book His Last Bow, Doyle wanted his readers to see this as the final Sherlock Holmes work. By my count, this is his fourth attempt to put Holmes behind him. He tried to do this at the end of The Sign of Four, when Dr. Watson married and moved out of 221b Baker Street. He attempted it again with “The Final Problem,” when he had Holmes and Professor Moriarty met for their fatal confrontation at Reichenbach Falls. The third time was in final story of The Return of Sherlock Holmes, “The Adventure of the Second Stain,” when Watson hints that this will be the last story he has to tell about the famed detective. And now, with His Last Bow, Doyle once again try to put the detective to rest. I can almost hear him saying, “I mean it this time!”

Alas, he didn’t mean it. There is still one more book, one more collection of twelve stories. Sherlock Holmes is in Doyle’s blood.