Rosencrantz and Guildenstern Are Dead

Home / Rosencrantz and Guildenstern Are Dead 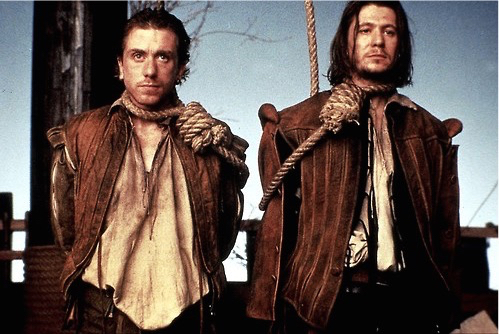 Yesterday I finally purchased Rosencrantz and Guildenstern Are Dead (1990) from iTunes movies. I had seen the movie three or four times before, and it has proven to be enjoyable everytime. Since every year or two, I suffer the desire to see it again, I decided that I needed to own it. The price was right, $9.99, and my mood was apt. I had finished my daily writing. I had finished my daily reading. Not ready for bed, I poured a glass of wine. The idea to buy this movie popped into my head, and within a minute, it was a fait accompli. I sat back, sippped my wine, and rewatched this favorite show.

The sight is dismal,
And our affairs from England come too late.
The ears are senseless that should give us hearing,
To tell him his commandment is fulfilled,
That Rosencrantz and Guildenstern are dead.
Where should we have our thanks?

Minor characters in Hamlet, who were these men whose deaths completed the tragedy? They are not minor characters to playwright Tom Stoppard, who made them the central characters of his 1967 play. In 1990, he adopted the play into film and directed it. Starring Tim Roth and Gary Oldman as the title characters, and Richard Dreyfuss as The Player, the movie followed Rosencrantz and Guildenstern on their fateful trip to Elsinore and to England. Intermixed with scenes from Hamlet, we follow them “off stage,” as they puzzle out their role in the palace and what the king expects of them. As Dreyfuss’ Player states:

We do on stage the things are are supposed to happen off. Which is a kind of integrity, if you look on every exit as an entrance somehwere else.

The strength of his movie lies in the repartee between Rosencrantz and Guildenstern. In one scene, set in an indoor tennis court, they play Questions. They shout questions at each other, scoring points for statements and rhetoricals. When The Player joins in their repartee, the dialogue becomes fast and hard to follow, but inspiring and funny. Rosencrantz and Guildenstern turn to The Player for answers, as if he were the Chorus to a Shakespearean play, there to provide exposition for action that can’t be shown on stage, but The Player has no answer. He frame everything as a treatise of theater.

There’s a design at work in all art…events must play themselves out to an aesthetic, moral and logical conclusion. We aim at the point where everyone who is marked for death…dies.

Like all of us, Rosencrantz and Guildenstern do not find the answers they seek. But their comic quest is fun to watch.