Poe: The Murders in the Rue Morgue

Home / Poe: The Murders in the Rue Morgue 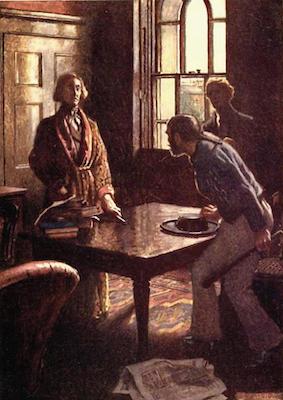 Of all the stories by Edgar Allan Poe that I’ve been reading during these past few weeks, I considered “The Murders in the Rue Morgue” my least favorite. Please do not read too much into that claim. I enjoyed reading it, and I recommend you read it. Even my least favorite story by Poe is entertaining and significant. It begins with a long expositional passage about the nature of reason that reads more like nonfiction rather than fiction. As a detective story, its solution to the mystery, I found, felt unsatisfying and contrived. Those are the two reasons I consider this story my least favorite.

But in the study of literature, it is a significant story. Arguably, it is Poe’s most important story in literary history. “The Murders in the Rue Morgue” is the world’s first modern detective story. That makes Poe’s story the progenitor of one of the fiction’s most lucrative genres, and it makes Poe the founder of that genre. Already in “The Murders in the Rue Morgue,” we find many detective-story conventions—a locked-room mystery, a sidekick who serves as narrator, and the climactic scene that focuses on an examination of the clues and the train of the detective’s thoughts.

Poe published “The Murders in the Rue Morgue” in 1841; it first appeared in Graham’s Lady’s and Gentleman’s Magazine. He later reprinted it in a pamphlet. The story was so well-liked that, in 1942, he offered the readers a sequel, “The Mystery of Marie Rogêt.” A third detective story, “The Purloined Letter,” appeared in The Gift: A Christmas and New Year’s Present for 1845. Poe considered “The Purloined Letter” to be his best story of “ratiocination.” I haven’t read “The Mystery of Marie Rogêt”—I intend to—but I have to agree with Poe that “The Purloined Letter” is superior to “The Murders in the Rue Morgue.” But only one of them founded a genre, so I write about it. All three of these detective stories share a detective, C. Auguste Dupin.

I do not doubt that when Sir Arthur Conan Doyle created Sherlock Holmes, he modeled some of his traits after Poe’s C. Auguste Dupin. The two men are very similar. They are both gentlemen with independent means. They both practice what Holmes called “the science of deduction.” They both had a friend or sidekick who serves as narrator the stories. And they both had a flair for the dramatic reveal. As far as Poe’s inspiration for Dupin, scholars point to Eugène François Vidocq, a French criminal who later became the father of criminology. He founded an organization that Napoleon recognized in 1813 as the Sûreté National (National Police). I suppose that made Vidocq Napoleon’s primary law enforcer. And I suppose this inspiration is why Poe set his detective stories in Paris.

“The Murders in the Rue Morgue” concerns the deaths of two women, mother and daughter. Neighbors heard their screams for help and rushed to their home. When they burst down the door, they found a grisly scene. The daughter was stuffed in a chimney; the mother had been thrown from the window to the yard below. Her head had been severed. Who could’ve committed such a deed and escape? Especially since the time between the women’s screams and the arrival of the crowd was so brief? Like Holmes, Dupin had no authority to investigate, but he leveled connections with the city police to do so. And like Holmes, he found a few clues—Poe spells it the old-fashioned way, clews—but those clues provided the solution to the mystery.

Retracing our steps we came again to the front of the dwelling, rang, and having shown our credentials, were admitted by the agents in charge. We went up stairs—into the chamber where the body of Mademoiselle L’Espanaye had been found, and where both the deceased still lay. The disorders of the room had, as usually, been suffered to exist. I saw nothing beyond what had been stated in the Gazette des Tribunaux. Dupin scrutinized everything—not excepting the bodies of the victims. We then went into the other rooms, and into the yard; a gendarme accompanying us throughout. The examination occupied us until dark, when we took our departure. On our way home my companion stepped in for a moment at the office of one of the daily papers.

I said above that I found the solution to the mystery contrived. Often, when reading a Sherlock Holmes story, it feels as if the famous detective pulls the solution out of thin air. But when you go back and reread the story, you discover that every clue Holmes used to form his conclusion was presented before his reveal. Though Watson had also observed the clues, it took Holmes’ deductive reasoning to understand them. In “The Murders in the Rue Morgue,” there is no such foreshadowing. Dupin does pull the solution out of the air. For that reason, I had always felt cheated in this story. And for a reason I can’t tell you without spoiling the story, the ending feels unsatisfying.

No, I tell myself every time I read “The Murders in the Rue Morgue,” that can’t be it! But alas, the mystery is as it is written, and it doesn’t change no matter how many times I read the story. I have said that it’s my least favorite of the stories by Poe. Despite that, throughout my life, I had read it a half dozen times. Least favorite, yes. But still exciting and enjoyable.