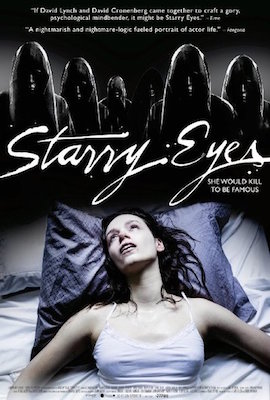 I have written about my love of horror movies but of my frustrations to find movies that really scare me. What scares us have been filmed so many times in so many ways that it is almost impossible for moviemakers to be scary. Almost impossible, but not entirely. Starry Eyes, financed in part from a Kickstarter project released in 2014, proves that there is still fear to be found on the silver screen. Part psychological thriller and part supernatural horror, it explores the theme of ambition and the extreme actions people will take to achieve success.

Written and directed by Kevin Kölsch and Dennis Widmyer, Starry Eyes stars Alex Essoe as Sarah. She’s an young Hollywood hopeful, living in a community of other young Hollywood hopefuls, and struggling to set herself apart from them. She works a dead end job at Big Tators, a Hooters-style restaurant, whose manager resents her for her frequent auditions. She shares a cramp apartment with Tracy, another aspiring actress, and Danny, an aspiring director, and she parties with others starlets, including Erin, who often rivals Sarah for parts. The pressure of distinguishing herself in this community gives Sarah the self-destructive habit of pulling out her hair.

Her big break comes when she auditions for a movie called The Silver Scream. After the audition went poorly, Sarah retreated into the women’s women’s room, where she pulled her hair. A casting director witnessed this and invites her back for another second audition. This leads to another call back, and to the introduction with the producer. During this meeting, Sarah begins to realize the price she must pay to achieve her ambition. She must transform, but into who? Into what?

Starry Eyes is well-written and well-acted. When I started playing the movie, I wasn’t quite sure what to expect, but it soon pulled me into its world. Sarah is a likable and relatable character; it is easy to sympathize with her and her driving ambition. That sympathy leads to understand the dilemma she faces and the emotional distress it causes. Empathy is the word I’m seeking. As readers and moviegoers, it’s something we strive for but how often do we really achieve it? I felt it for Sarah, as she struggle through a range of emotions from self-hatred to anger, and as she struggles between doubt and commitment. En route, she makes bad decisions, but as I often say: Bad decisions drives good fiction. Who wants to watch a movie about someone who does everything right? Sarah does everything wrong, and she brings us with her path to transformation.

Starry Eyes is independent filmmaking at its most creative. I won’t claim that its free of the cliches that make other horror movies bad, but I will say that those cliches never got in the way of enjoying the movie. The climatic scenes were tense and scary, which is what I want from horror movies. Like all movies in the Netflix Now series, it is currently available on Netflix Instant Play. So pop your popcorn, pour yourself a soda, and turn out the lights.

Verdict: Worth your time. 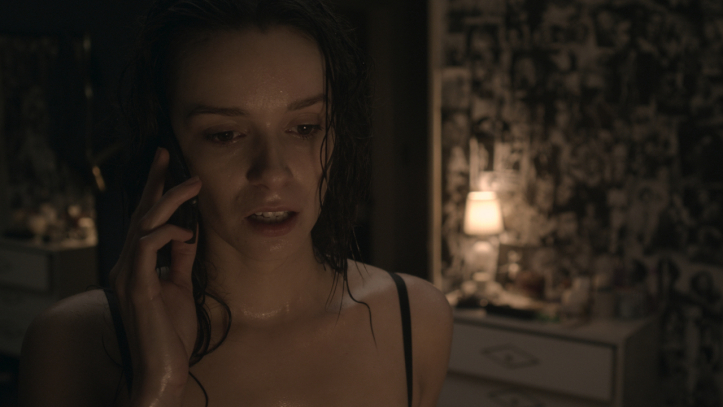