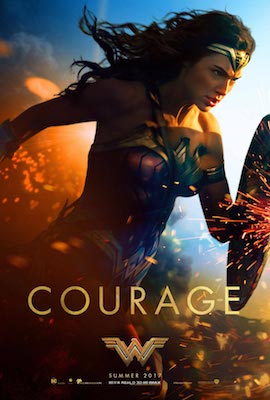 If on January 1, you had asked me to make a list of my ten most anticipated movies this year, I would’ve struggled over nine titles. Unlike others who review movies on the internet, it isn’t my wont to think so far ahead. I rarely think farther ahead than next weekend; indeed, I often decide what Saturday movie I’m going to see on Saturday. There had been times when I didn’t know until I reached the box office. But I had been anticipating one movie since seeing Batman v Superman: Dawn of Justice last year. That movie, of course, is Wonder Woman.

Though I felt excited to see it, I suffered concerns. DC Comics effort to launched a share cinematic universe, modeled on Marvel’s success, had been greeted with mixed reviews, including on this website. Since I failed to see Man of Steel (2013) prior to seeing Batman v Superman (2016), I felt lost during the first act of the later movie, and by the time I found my way in its narration, I felt a distaste for the show. I liked aspects of it, but other aspects alienated me. Overall, I believed the screenplay needed more work before Zack Snyder and company went into production. I hoped Suicide Squad (2016) would redeem the DC Extended Universe (DCEU), but again I felt it was a movie with potential it failed to realize. Would Wonder Woman, the fourth film of the DCEU, be a similar disappointment? The more excited I grew to see it, the more I braced myself for potential disappointment.

Rather than disappointing, Wonder Woman rewarded the excitement I felt for it. The screenplay by Allan Heinberg was strong and coherent, and director Patty Jenkins’ execution of it was powerful and emotional. Cinematographer Matthew Jensen brought it to life, and the score by Rupert Gregson-Williams gave the movie a much appreciated unity. Usually in movies, I enjoy the score in a subliminal way. I’m not overly aware of it, but I know if it weren’t there, I would feel cheated. Gregson-Williams’ score deserves notice. It added depth and pathos to the events on the screen, and it fused so well with the story, it’s impossible to separate them. I particularly liked the riff—is that the right term?—that played during Wonder Woman’s action scenes.

The visuals were beautiful and impressive. Superhero movies tend to end with a CGI overload that I feel needs to be toned down, but I didn’t feel that way here. Yes, it ended with a climatic scene filled with CGI, but it felt well-suited for the context, because Wonder Woman was battling the god of war, Ares. The settings felt real, including the Island of Themyscira, the Amazons home. They teased Wonder Woman’s costumed a few times before actually showing it. Since we had seen the costume in the trailers and promotional photography, I’m not sure why they bothered. But the scene where Diana Prince whipped off her cloak and became Wonder Woman played well for dramatic effect, so I felt glad that was the first time I saw the costume in the film.

Like Thor, Wonder Woman has a foundation in mythology—in this case, the Greek myth of the Amazons. Several Greek sources wrote about this tribe of warrior women, from Homer to Plato. But did the Amazons really exist? Or were they just fictional people? The myths had them originating in modern-day Libya, but being a nomadic people, they migrated northwards towards the Black Sea. During the Trojan War, when Queen Penthesilea allied her Amazons with Troy, they seemed to live on the Black Sea coast near modern-day Samsun in Turkey. According to Herodotus, my favorite historian, they ended up in Scythia, where they mated with Scythian males to create the race known as Sarmatians. Perhaps Herodotus has the right of it, because in southern Ukraine and Russia—the homeland of the Scythia-Sarmatians—archaeologists have uncovered graves of women dressed for battle.

The Amazons in Wonder Woman live on Themyscira, an island hidden by a fog bank to discourage discovery. Princess Diana, daughter of Queen Hippolyta, yearns to grow up and train as a warrior, but her mother is overly protective. She told Diana about how Zeus created man, but Zeus’ son, Ares, the god of war, corrupted them with war. One day, the Amazons would have to fight Ares and kill him, and to that end, Zeus gave them a sword, the god killer. Years later, Diana, now a young woman, witnesses a plane crash near the island. After rescuing the pilot, Steve Trevor, she learns of The Great War. She realizes the time has come for her to face Ares. Armed with the god-killer sword and few other divine gifts, she leaves Themyscira with Steve and ventures into the Industrial Age. 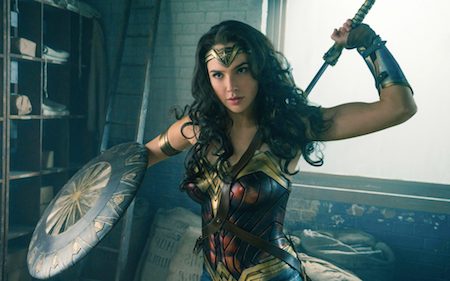 Gal Gadot reprises her role as Diana Prince aka Wonder Woman from Batman v Superman. The Wonder Woman sequences in Batman v Superman were that film’s best element, its most rememberable moments, and they added to my excitement for Wonder Woman. But it was a small role, a supporting role, and I left Batman v Superman with several questions about how they would develop the character. Gadot in Wonder Woman answered those questions. She blended naïvety and precociousness into a character that is both paradoxical and believable. She believes the childhood myths about how the Amazons exist to defeat Ares while revealing a practical understand of world affairs. Diana is a caring woman; she cares about the fate of man and grieves over the tragedy of war. Gadot did a wonderful job in bringing these conflicting traits to life, making Diana Prince/Wonder Woman the most well-rounded movie superhero I’ve seen. She wins my award for best actor in the movie.

That’s a lot of characters and a complex storyline, but Wonder Woman is, at its heart, a superhero origin story. Origin stories tend to be two movies fused into one—the story about how the superpower came to exist and story about the hero’s first battle against a super villain. Wonder Woman blended these two tales into a coherent movie that flows better than most origin stories. Once again I credit Heinberg’s screenplay, joined with the direction of Jenkins, and the editing of Martin Walsh. I never felt lost in the story or overwhelmed in the number of characters.

Wonder Woman is the first movie from the DCEU that I feel they did right. I enjoyed the other movies, especially Batman v Superman and Suicide Squad, despite their flaws. I wouldn’t call Wonder Woman a flawless movie, but its flaws were few and forgivable. Though part of a cinematic universe, it stands alone. In no way do you need to know what happened in the other movies to understand this movie. The only evidence of the shared storylines was in the opening and closing vignettes that showed Diana Prince in modern times. She’s working at the Louvre. Alone in her office, she opens a package from Bruce Wayne. It contains the photograph of Wonder Woman, Steve Trevor, and the other members of her team that Wayne discovered in Batman v Superman. His note asks her to one day tell him the story behind the picture. That segued into the main story, a flashback story about Wonder Woman and World War I.

I loved that frame, because that’s how you connect movies in shared universe without loading them up with self-referring dialogue, superfluous scenes, or Stan Lee cameos. (Yes, I’m looking at you Marvel Cinematic Universe!) I want the DCEU to succeed, because I love the atmosphere of these movies. Their tone. The DC superheroes are grittier, darker characters, and the violence feels more realistic and consequential. The characters feel better developed and more rounded. And the stories explore dark and complex themes.

Wonder Woman examines war and why men fight it. Her character arc straddles her understand of war: from the childhood stories about Ares that Hippolyta had told her to a broader and more complex understand of war as she witnessed on the front lines in Belgium. Stories are about change. The Princess Diana we met on Themyscira is not the same Diana Prince we leave in London on Armistice Day. She has matured. In a very real way, this is a coming-of-age story about a young woman losing her innocence. It’s about her journey from an idealistic Iron Age culture into a violent and bloody Industrial Age reality.

Wonder Woman satisfies. It satisfies as a superhero action movie, but it also satisfies in the deeper layers of character development and theme. It is a movie worth seeing, and I strongly recommend it. It more than justified the anticipation and excitement I felt for this movie during the past year. 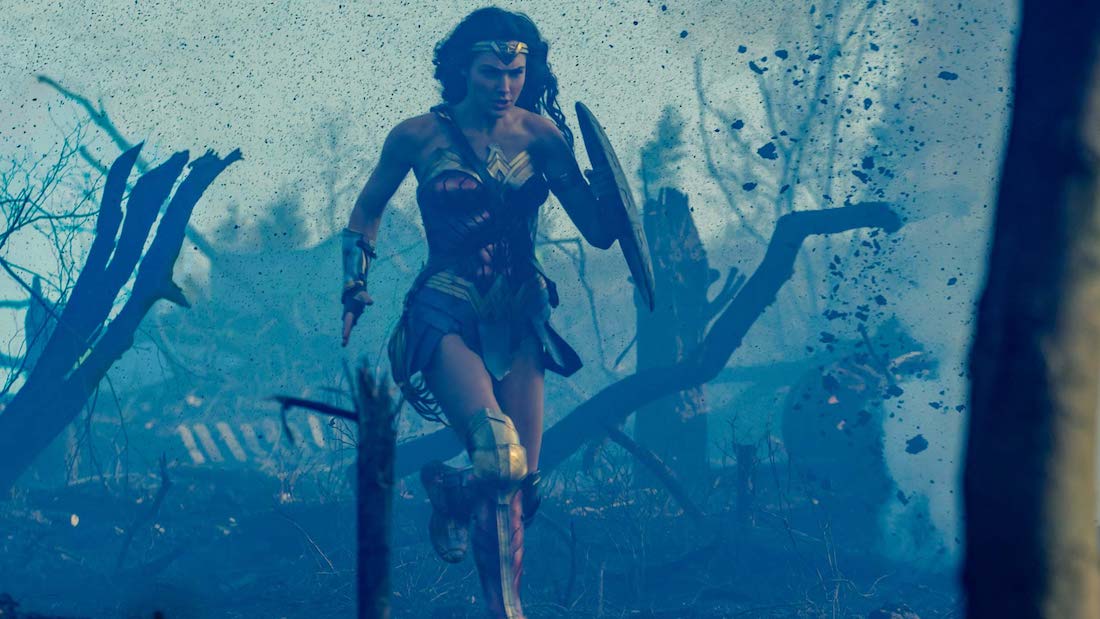