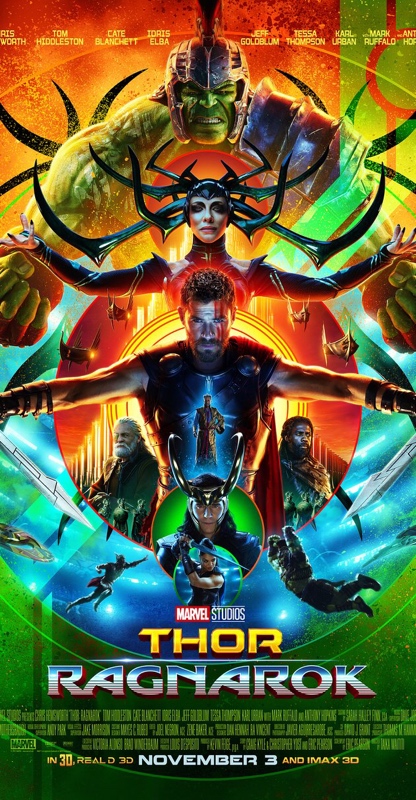 When I went into the theater to see Thor: Ragnarok, I didn’t know what to expect. I’ve seen a trailer or two, so I knew Hulk was in it. But I haven’t read over the cast list or seen any press release. That’s the norm for me; I prefer going into a movie ignorant. As I watched it, my first reaction was: Huh? I have mixed feelings about the first thirty or so minutes. I often found myself thinking: They ruined Thor! But by mid-movie, I was engaged. After the movie, as I walked out of the theater, I thought: A good pivot towards Infinity War.

I liked the movie–there’s no question there–but it’s a much different movie than I expected, a much different movie than the previous Thor movies, and even a much different movie than the other movies in Marvel Cinematic Universe (MCU). It had a comic tone that I wasn’t prepared for. Humor had existed in Thor movies before; it has existed in all of the MCU. But in the past, humor came via the banter between the characters or via the inclusion of comic relief characters like Darcy (Kat Dennings) in the first two Thor movies. In Thor: Ragnarok the humor comes from situations. In fact, the first thirty, forty minutes felt more like a comedy than a superhero action film. Though entertaining, I feel this weakened the story and set the wrong tone for a movie that would eventually become a superhero film.

Many of the characters from the other films are gone. Jane Foster and her entourage are gone. There was a line about how Jane broke up with Thor, but he claimed that it was a mutual decision. Whatever! I can’t imagine it was a great relationship, with him living on Asgard and going on Thor-type adventures and her living on Earth feeling ignored and abandoned. I suppose there are viewers who worried about the state of their relationship and appreciated the update, but as I’ve said before, in these action movies, I don’t care who’s kissing whom. Also gone are Sef and the Warriors Three. The Warriors Three do make an appearance, but they’re more cameos than actual roles. And speaking of cameos, I wish I could tell you that Stan Lee came to his senses and decided not to have a cameo in Thor: Ragnarok, but, alas, he appeared in it, in his most intrusive cameo to date.

New characters replace these missing faces. Mark Ruffalo reprises his roles as Bruce Banner and Hulk, bringing the character for the first time into a Thor movie. Karl Urban plays Skurge, who has replaced Heimdall as the gatekeeper. Jeff Goldblum is the Grandmaster, the leader of planet of hedonists, outcasts, and scavengers. Tessa Thompson, who we met from HBO’s Westworld, plays Valkyrie, also known as Scrapper 142. Since both are jobs titles rather than names, I begrudged that they didn’t give her character a real name. As a warrior woman, she’s my favorite new character, and a fine addition to Thor’s world. The rapport between her and Thor are sometimes hostile, sometimes friendly, but always believable and dramatic. With Valkyrie I think they finally found Thor the female companion that Jane couldn’t be–being a scientist rather than a warrior–and that Sef failed to be. Since it’s not easy to keep up with Thor–him being a god, you know–I give Thompson my award for best actor. 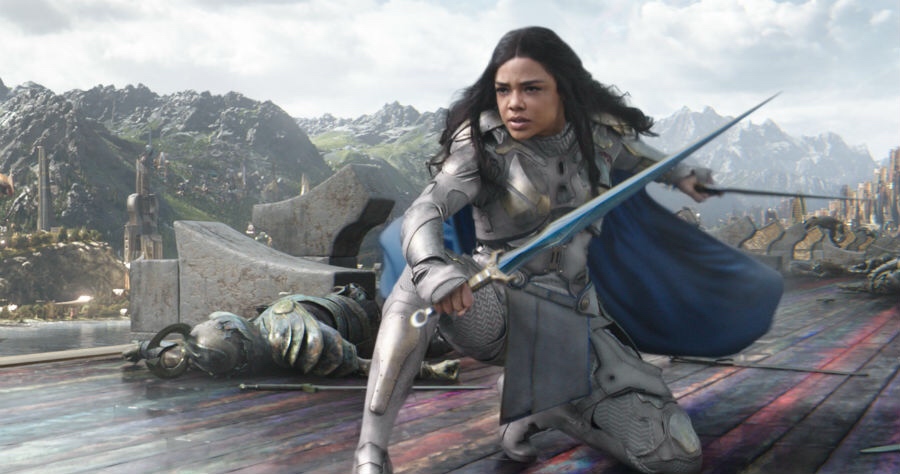 Tom Hiddleston reprises his role as Loki, but this time, he’s not the primary villain. That belong to Hela (Cate Blanchett), the Goddess of Death and Thor’s older sister. I wish I could tell you that she’s as engaging a villain as Loki was in the original Thor and in The Avengers, but she falls short. Perhaps that’s more a praise for Hiddleston in those movies rather than a complaint against Blanchett, who is convincing as Hela. In truth, I think it’s the fault of the writers–Eric Pearson, Craig Kyle, and Christopher Yost–who could’ve fleshed out Hela better. Their screenplay relied too much on situational comedy and not enough on character development or plot. I also fault director Taika Waititi, who I imagine instigated the comic tone.

The story was fun and interesting and exciting, but it needed refinement. I complained about the situation comedy that began the movie, but that wasn’t the only fault. The movie suffers pacing problems. For its first hour or so, it felt as if the filmmakers didn’t know where they wanted Thor: Ragnarok to go. After a series of events that I won’t go in to–spoilers–Hela returns from exile. After defeating Thor in battle, she headed to Asgard to take her rightful place–as first born–as queen. Thor tries to pursue, but he becomes sidetrack and lands on Sakaar, where he’s taken as a slave and forced into gladiatorial fights. Meanwhile on Asgard, Hela solidifies her power and prepares for a conquest of the universe. So the conflict revolves around Thor escaping his slavery and returning to Asgard to stop her.

This story, I fear, failed to established conflict between Thor and Hela until late in the movie. Their initial confrontation happened so quickly it was not satisfying. And the two never met again during the entire middle of the movie. So when they met during the so-called third reel, the climax felt rushed, even forced. But man was it dramatic! This was conflict with consequences, where the heroes bled and where dilemmas led to disastrous decisions. After the fight, it was clear that nothing would ever be the same again. That action-packed third act was why I left the theater glad I came. Thor: Ragnarok was entertaining from the opening scene to the end-credit scene, but only during the climatic scene did it feel like a Thor action movie.

Chris Hemsworth stars at Thor. Late in the review to mention the star, I know, but it’s not to degrade Hemsworth, who was as enjoyable in the role as always. It’s more a reflection of the success of MCU to establish their stars as the characters they play. It slipped my mind that I should mention the lead actor. Of course, Chris Hemsworth will play Thor. Who else? After three Thor movies and two Avengers movie, he’s so right for the role that I imagine it’ll be decades before anyone else can play the part.

Thor: Ragnarok is a good movie that is worth seeing, and since it’s a movie strong on special effects, I think it’s a movie worth seeing on the big screen. It’s not the best movie the MCU produced, not even the best Thor movie, but it holds its own and justify its existence. In some respects, it feels like a door jamb to me. There was Captain America: Civil War and soon there will be Avengers: Infinity War. Some movie has to hold the door open between these two movies, and Thor: Ragnarok is that door jamb. 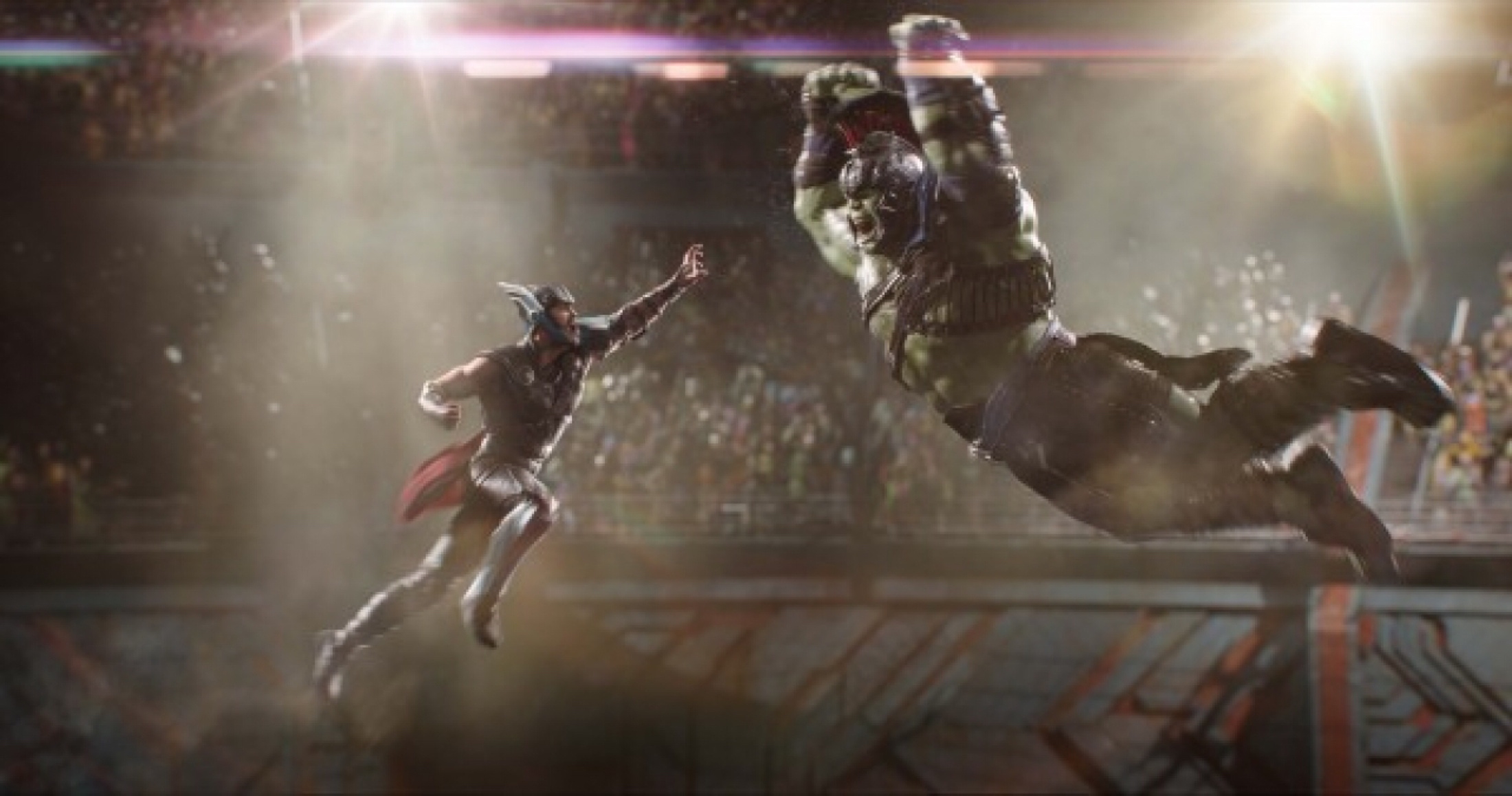