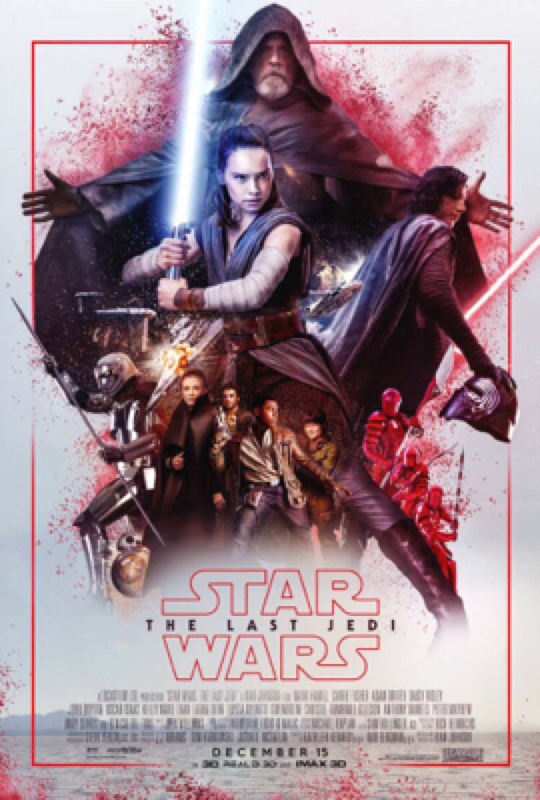 I missed the opening crawl, because some idiot stepped in front of me during it–not once, but twice. I lost my place the first time, and just as I was finding it, he cut in front of me again. And stood there! By the time he moved on, the crawl was over. I hear tell that Dante will add a new circle to Hell for such fools!

A minor inconvenience, I suppose, since Star Wars crawls have never been essential for understanding the movies, but a major annoyance, because reading the crawl is part of the Star Wars experience. I love reading them! When I rewatch the movies at home, I read them aloud. It’s great fun! And I so very much wanted to read this crawl as it played; I wanted the crawl to be my introduction to the movie, as it had been to the previous movies, and now that’s ruined forever. But it didn’t ruin the movie for me. Star Wars: The Last Jedi is an enjoyable movie, a little flawed, disappointing in parts, but overall a movie well worth seeing and an experience well worth the price of admission.

Rian Johnson wrote and directed The Last Jedi. I know this director from one of his earlier works, an independent film called Brick (2005). I don’t remember much about it except that I liked it and found it interesting. It’s a film noir set, not in the dark city as we expect noir to be set, but in suburbia. Joseph Gordon-Levitt plays a high school student who decides to investigate his ex-girlfriend’s death. It was quirky, but that didn’t prevent the events from felling dangerous and consequential. If you haven’t seen it, you should check Brick out.

Who would’ve guessed that such a director would end up helming a Star Wars film? He had the challenging duty of writing and direction the middle installment of a trilogy. I always believe the middle movie is the hardest to achieve, because it requires tying up loose threads from the first film while introducing new threads to pass onto the final film. It requires steering the trilogy away from the predictable and towards the surprising. Johnson achieved that. As I was leaving the theater, I thought: It’s been years since a movie surprised me as much! Johnson has a knack for writing unexpected twists. 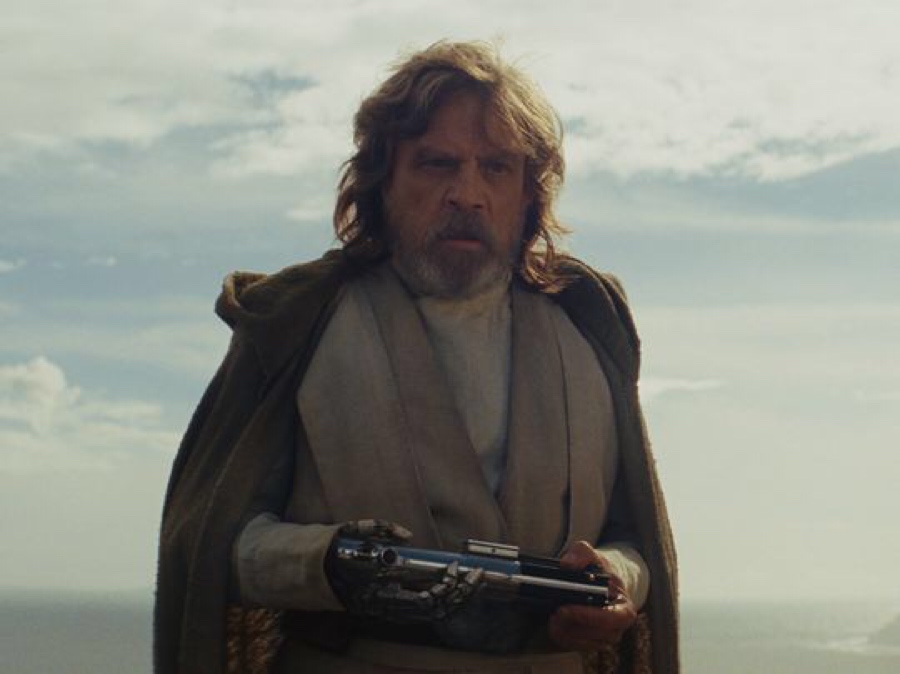 I listed more characters than I normally list for a movie review, but I fear there are others that I should be listing that I’m neglecting. The number of characters is the biggest weakness of the film, and it forces the filmmakers to divide our attention between them, making parts of the film feel choppy and disorganize. Some characters, like Dern’s Amilyn and del Toro’s DJ had so little character development, so little screen time, that I wonder why they introduced them. Without Hans Solo, they didn’t seem to know what to do Chewbacca. I think that’s the saddest thing in the movie to me, because Chewbacca was always the most emotional character in the Star Wars universe. Wookies are strong, proud beings, and there’s no reason why Chewbacca can’t have a bigger role.

But Johnson even seemed uncertain how to employee Finn and Poe. Of the surprises I wrote about above, that uncertainty is the biggest BAD surprise. Finn’s subplot felt so inconsequential that if they had left it on the cutting-room floor, nothing in the movie would’ve changed. At least he had a subplot, which was more than Poe could claim. Rather than a subplot, Johnson gave Poe grand gestures. He provided much of the action in the action set pieces, especially in the battles between the First Order and the Resistance. Though they were fun to watch, they did nothing to advance the character nor our understanding of him.

Not knowing what to do with these characters is the biggest weakness in The Last Jedi, but Johnson made up for this weakness with Rey and her conflicts with Luke Skywalker and Kylo Ren. The Last Jedi picks up Rey’s storyline exactly where The Force Awakes left it off, with her standing on the edge of the cliff with Luke, offering Anakin’s lightsabor to him. In fairness to Johnson, wanting to know what came next between Luke and Rey was the biggest question that drove me to see this film. Since I imagine it’s what drove many people to The Last Jedi, it was a reasonable decision to focus on it. In my private notes about this movie, I wrote that Luke’s conflict is an internal conflict–man vs. self–and when Rey arrived on Ahch-To and confronted him with the lightsaber, she gave this internal conflict an external extension. Disillusioned by the Force, he wanted to spent the rest of his life free of it and away from the battle between the Dark Side and the Light Side. But Rey reminded him that there is more work to do, and she struggled to bring him back to the fight. That was an interesting dynamic to watch, and it provided the movie with its mystical themes. 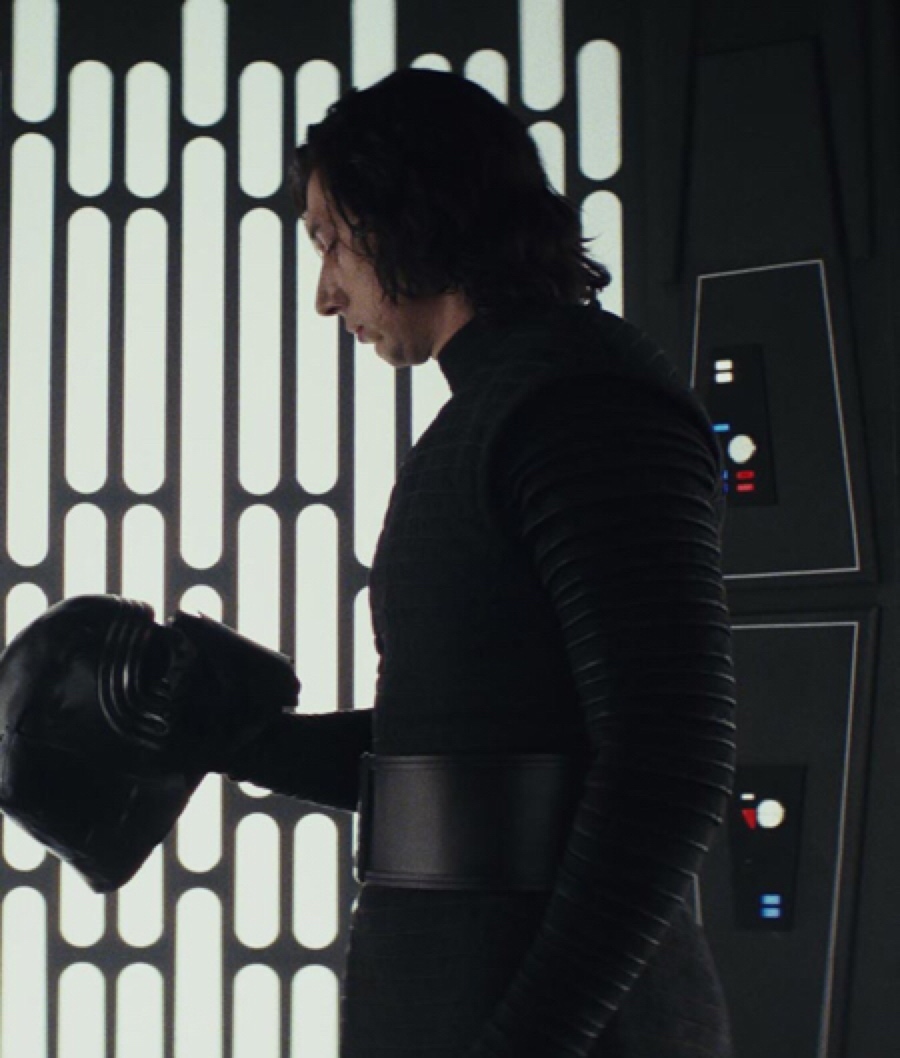 It wouldn’t be a Star Wars movie if it failed to deliver great action sequences. The Last Jedi begins with a dramatic space battle, and throughout it, it gives us several action set pieces, that includes more battles and lightsaber duels. It ended with a battle on a small planet called Crait. As expected, these set pieces were fun to watch, and the battle on Crait was visually stunning. The Star Wars franchise has always told the story of the war on both a macro level–armies fighting armies–and a micro level–the actions of individual heroes like Luke Skywalker. In terms of understanding the overall war and how it was progress, The Last Jedi left me with the clearest idea since The Return of the Jedi.

The Luke Skywalker we meet in The Last Jedi is a much older man than when we left him at the end of The Return of the Jedi. He has grown cynical, war-wary, even defiant. He displays a much broader range of emotions than he has ever shown before, with more subtle nuances. Not counting the cameo at the end of The Force Awakens, I’ve seen Mark Hamill play Luke Skywalker in four movies, but I’ve never seen him give a finer performance than he does in The Last Jedi. For that reason, I award him best actor.

I wish Rian Johnson had revised the screenplay to build a subplot for Finn and Poe that felt more relevant to other events in the movie. His failure to do so is my chief complaint with The Last Jedi. It does its job as the middle installment of a trilogy, answering unanswered questions from the previous installment, while setting the stage for what we assume will be a decisive confrontation in the next. Both Rey and Kylo Ren developed in ways that excite me. Because of their character arcs, I think of The Last Jedi as the most character-driven Star Wars movie to date. I don’t think of it is as strong or as well written as J.J. Abrams’ The Force Awakens, but it’s a movie with more strengths than weaknesses, and it’s well worth seeing. 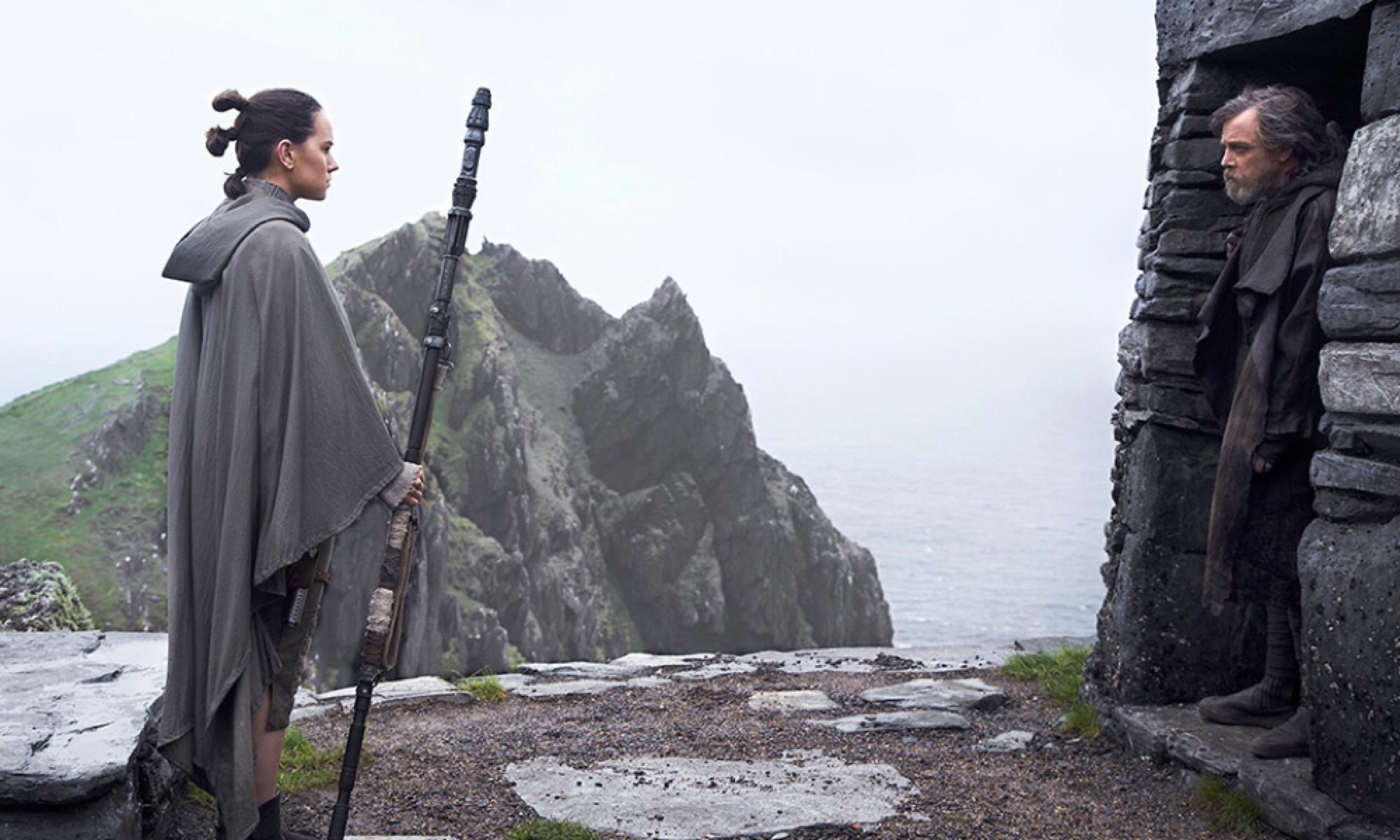