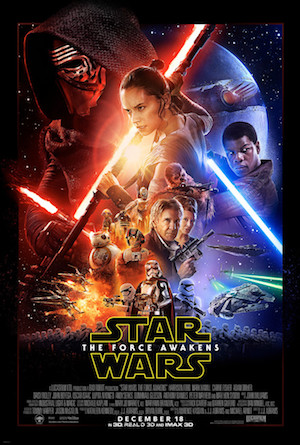 Years after the fall of the Galactic Empire, a new threat to freedom arises in the form of the First Order. With the goal of destroying the Republic and becoming the dominate government, the First Order found itself faced with a new generation of freedom fighters, the Resistance. Led by General Leia Organa, the Resistance seeks the whereabout of Luke Skywalker, the last Jedi. Seeing a map to Luke’s location, Leia sends a pilot, Poe Dameron, to Jakku to obtain this map, but the First Order is not far behind. Led by Kylo Ren, they capture Poe, but not before he had hidden the map in a droid that fled the fight.

If this beginning reminds you as the Star Wars: The First Hope (1977), there is no mystery why. At the risk of a spoiler, I confessed there is a similarity of plot between The First Hope and Star Wars: The Force Awakens that is arguable the movie’s greatest weakness. But I do not make this argument–though others will–because I found comfort in the similarities. The Force Awakens looks back to Star Wars’ origins, but it also looks forward to the future of the series. It is a blending between old and new ideas. And it achieved something that the prequels failed to do–it created continuity between the original trilogy and this installment.

In my mind, Star Wars: The Force Awakens, directed by J.J. Abrams, had to perform two tasks. First, it has to restore the franchise from the disasters of the prequels, reconnecting us fans with those elements that made the original trilogy fun movies. Second, it has to redefine the franchise for the future episodes and a new generation of heroes. These dual function required a balancing act, because they could’ve found themselves at cross-purposes. How do you look backwards and forwards with your eyes turned in only one direction? But Abrams, who cowrote the screenplay with Lawrence Kasdan and Michael Arndt, managed to achieve both purposes and present us with a movie that is both what we want from Star Wars and expect from a modern movie.

Like many people, I have mixed feelings about the history of the Star Wars franchise. I loved the original trilogy. Elsewhere in this blog, I had written about what The New Hope meant to me and how it had influenced my life. This followed by The Empire Strikes Back (1980) and The Return of the Jedi (1983) created a fun and exciting trilogy. They are the principle movies of my youth. Each one in its own way is a favorite movie.

In 1999, when I saw The Phantom Menace, I felt disappointed. I wanted the movie to live up to the Star Wars name and reputation, but the movie was poorly written and poorly shot. Since I knew the new trilogy focused on the transformation of Anakin Skywalker into Darth Vader, I thought it was a mistake to introduce Skywalker as a kid. And why would you kill off Darth Maul? What an exciting villain! What a missed opportunity! When the prequels developed with Attack of the Clones (2002) and The Return of the Sith (2005), my disappointment grew. It was not that these movies were bad, but they were far from the quality I expected from Star Wars. The plot rested on the shoulders of a love affair that was unbelievable and unconvincing, partly because of Hayden Christensen’s wooden acting, but mostly because–once again–they introduced Anakin as a child, while Padmé (Natalie Portman) was a grown woman.

When I heard that George Lucas sold Lucas Films to Disney, who intended to move forward with a new trilogy, I hoped that trilogy will redeem the Star Wars franchise from the disasters of the trilogies. A Force Awakes does this.

Carrie Fisher, Harrison Ford, and Mark Hamill reprises their roles as Leia, Han Solo, and Luke Skywalker. Their involvement in the project help create the continuity between the original trilogy and this new crisis. Leia, forever the freedom fighter, leads the Resistance against the First Order. Han Solo, having fallen on hard times, has returned to his smuggling days. One of the charms of the original trilogy was the interplay between Solo and Chewbacca (Peter Mayhew). That interplay still exist in The Force Awakes; in fact, I found it funnier and more enjoyable. It is the main source of comic relief.

Accompany these old familiars are the characters that will take the Star Wars franchise into the future. Daisy Ridley plays Rey, a desert scavenger on Jakku. Like Luke Skywalker in A New Hope, she’s a simple person living a subsistence life on a barren planet. When she encountered the fugitive droid, she becomes a reluctant player in the war between the First Order and the Resistance.

Oscar Isaac plays Poe Dameron, the Resistance best pilot. Beyond that epithet, the movie doesn’t develop his character. I believe this is my biggest disappointment in this movie; I left the theater knowing nothing about Poe’s personality or goals. What motivates him? What’s his backstory? The movie gives us nothing to work on with Poe. I wish it had, and I hope future installments helps to flesh him out.

Adam Driver plays Kylo Ren, the new badass to replace Darth Vader, who he worships and prays to like a god. But unlike Darth Vader in The New Hope, Kylo Ren is conflicted. He wants to be a master of the Dark Side, but he suffers too many conflicting emotions and insecurities to achieve it. Interesting villains make for great movies, and Kylo Ren is far more interesting than Darth Vader hoped to be. It was the objective of the prequels to round out Vader’s character and create that interest for us. But no one will need a prequel to round out Kylo Ren. I understand him better after this movie than I understood Anakin Skywalker after the prequel series.

Perhaps the most interesting new character is Finn, played by John Boyega. He’s a stormtrooper who defected. Though his original goal was to flee out of the First Order’s reach, when he meets Rey, he finds himself helping her. I’m uncertain whether they are becoming each other’s love interest–as Hans and Leia–or simply good friends. I’m okay either way. I know Hollywood loves its love stories, but in a science-fiction adventure like Star Wars, I don’t care who’s kissing whom. (Take that Anakin and Padmé!) Rather platonic or romantic, his feelings for Rey draw him deeper into the conflict against the First Order and Kylo Ren. As such, he has the most dynamic character arc, and to me, dynamic character arcs make characters interesting.

Though the plot is similar to The New Hope, the tone of The Force Awakens is much darker. This is the darkest of all Star Wars movies. When we remember that in The Empire Strikes Back, Hans Solo was incased in carbonate, and in The Revenge of the Sith, Anakin Skywalker became Darth Vader, we realized that the Star Wars franchise is no stranger to darkness. But I found The Force Awakens a much darker move than even those two examples. I’m attracted to the Dark Side; I’m interested in the Dark Side. I like movies that are willing to explore death, that are even willing to kill off that character no one wants dead. The Force Awakens is such a movie. Though it has its feel-good moments, it is not, contrary to A New Hope, a few good movie. This is a movie–hopefully a trilogy–that will explore dark motivations and dark themes. The epilogue of A New Hope was an awards ceremony where Luke and Hans Solo earned medals. The epilogue of The Force Awakens is brooding and tense, suggesting that more trouble lies ahead.

The Star Wars franchise has always been a series that balanced fun entertainment with thought-provoking ideas. It isn’t an intellectual exercise, like The Godfather trilogies, but it also not frivolous entertainment like almost every action movie Hollywood throws at us today. Even the disappointing prequels struggled to explore interesting themes–friendship, loyalty, and the lure of the Dark Side. Star Wars: The Force Awakens continues in this tradition of balancing fun entertainment with literary themes. If you haven’t yet seen it, I recommend you to dig in your pocket and buy that ticket.