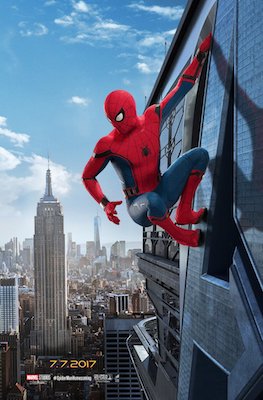 Tom Holland is Peter Parker; Tom Holland is Spider-Man. From good writing to compelling performances to exciting set pieces, Spider-Man Homecoming gives us several reasons to love it. But the top reason, the number one reason, is Tom Holland. Like no other actor I’ve seen, he owns this role.

Since 2002 there had been six Spider-Man movies. In three of them, Sam Raimi directed Tobey  Maguire as the web-slinger. In two others, Marc Webb directed and Andrew Garfield starred as Peter Parker and Spider-Man. Though these two series have elements to recommend them, they both suffered from complicated plots—characterized by too many villains and prolonged origin stories. Though both began with Peter Parker in high school, I never felt convinced I was watching a teenager during these films. The teenage angst in both films felt contrived, and they added a complexity to a story that was already too complex. I hated Tobey Maguire as Peter Parker. Though I felt Andrew Garfield gave a convincing performance, he looked too old for the part. And both series began with their versions of the origin story—the spider bite that gave Parker his super skills and Uncle Ben’s death. Since most of these movies chose to have at least two super villains—with the accompany origin stories—there was a lot happening on the screen in all of them.

Entertaining to watch. Yes, sure. But still very, very busy!

Remembering this history of the franchise, along with my mixed-feelings about the Marvel Cinematic Universe (MCU), I went to Spider-Man Homecoming hoping it would right the course but fearing it would repeat past mistakes. Two facts gave me hope. First, the MCU produced this movie. Mixed feelings about the MCU aside, they had yet to give us a bad movie. And now that they have a decade of experience turning Marvel comics into Marvel movies, they know how to do it right. Secondly, they introduced Tom Holland as Peter Parker/Spider-Man last year in Captain America: Civil War. Though a small role in an ensemble movie, Holland’s performance was fun to watch, and his quips helped define the character we remember from our childhood. He stole Captain America’s shield—no small feat for a teenager. But could the MCU take this cameo and turn it into feature film?

Directed by Jon Watts, Spider-Man Homecoming gives us the Spider-Man movie we wanted fifteen years ago—when they gave us Tobey Maguire instead! The best decision the filmmakers made is to abandon the origin story. We saw it in Spider-Man (2002) and in The Amazing Spider-Man (2012). We had no need to see it again in Spider-Man Homecoming. We had already seen the radiative spider bite Peter Parker; we had already witnessed Uncle Ben’s death; we have already learned that with great power comes great responsibility. In Spider-Man Homecoming, Peter Parker is already Spider-Man. That gave the screenwriters—too many to list, sorry screenwriters—the ability to focus on the main conflict—Spider-Man’s efforts to stop a gang led by Adrian Toomes from distributing high-tech weapons. What a beautiful formula that is: One superhero, one super villain, and the clash between them. This allows not only for a tighter plot but also for stronger characterizations. 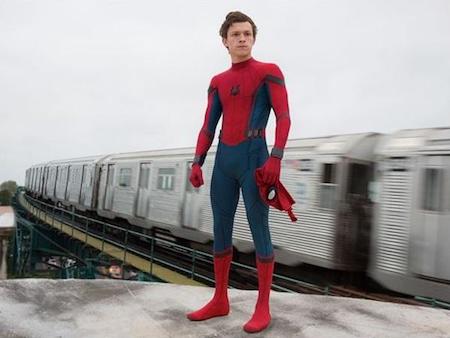 Tom Holland, born in 1996, still looks like a teenager; he looks the part. And he still acts like a teenager. Well, since he’s an actor, he’s supposed to be able to act like a teenager. But unlike Maguire’s and Garfield’s Parker, Holland’s teenager feels convincing and authentic. As Peter Parker, he’s concerned with keeping his Spider-Man activities a secret from friends, teachers, and Aunt May. Especially Aunt May! At the same time, he wants to date Liz—the hottest and most popular girl in school. He stares at her in longing and talks about his desire with his best friend, Ned. As Spider-Man, he’s uncertain and reckless. This Spider-Man reminds me a bit of Kick-Ass (2010). Though he has super strength, he’s uncertain and untested, and he has yet to learn how to use that skill to effect. He has more heart than skill, more courage than judgement. In set piece after set piece, he believes he’s in control, but he soon loses control and the stakes become life-threatening for those around him. This incites Tony Stark’s anger. Stark is his mentor and benefactor, but he is also a father figure, dispensing advise and discipline in equal measure. Every teenager enters that phase where he resents adult rule. Peter Parker is in that phase now, and Tom Holland plays it beautifully. He gives us an emotional depth to the character that neither Maguire nor Garfield achieved.

As they got the superhero right, they also got the super-villain right. Michael Keaton plays Adrian Toomes, the Vulture. As they dispense with Spider-Man’s origin story, they dispensed with Vulture’s origin story. Instead of giving us an hour-long origin story creating the villain, they established his goals and motivations in two scenes early in the movie. Why would you need more? This gives us a more elegant introduction to the villain than any other Spider-Man villain to date, and it grounds him in the real world that we all know and live in. Toomes owns a salvage company that he expanded after the Chitauri attack on New York, as seen in The Avengers (2012). After Stark and the government pull his contract, he felt cheated. Worried about his future and the future of the men he had hired, he decided to take his salvage operation underground. Using Chitauri technology, he and his gang created and distributed high-tech weapons. It’s this operation that Spider-Man needed to destroy. As played by Keaton, Toomes feels familiar—even likable. We all know a Toomes, that blue-collared worker struggling to better his life. Though we don’t approve of his choices, we at least understand his motivation. Except for Loki, the MCU has failed to give us exciting super-villains, but Toomes corrects this oversight. He’s a super-villain I hope to meet again and again.

The story is linear—perhaps too linear. It suffers from predictable. Except for one reveal, that began the final act, there were no surprises in the story. If you’ve seen the trailers, you have a good sense of what happens on screen. But what happens on screen is fun, exciting, and worth seeing. The set-pieces are wonderful. They gave us what we want in a superhero movie—mass destruction, risk of innocent lives, and a test of the superhero’s strength. Spider-Man Homecoming is a superhero action movie, but more than that, it’s a character movie. By that I mean this is more about the emotional journey of the Peter Parker and his Spider-Man’s alter ego than about the action sequences. There’s plenty of action sequences—don’t get me wrong—but along with the conflict with Toomes and his organization, Parker suffers an interior conflict with himself. He enjoys a compelling character arc from cocky teenager to victorious superhero, and he’s more mature for it.

Along with Holland and Keaton, Spider-Man Homecoming stars Jacob Batalon as Ned, Parker’s best friend; Laura Harrier as Liz, Parker’s love interest; and Zendaya as Michelle (M.J.), the ignored girl in school. Robert Downey Jr. stars as Tony Stark; Marisa Tomei stars as Aunt May. Of this supporting cast, I believe Batalon gave the best performance. Best friend to Peter Parker and sidekick to Spider-Man, Ned gave us both comic release and an emotional grounding. Both Maguire’s and Garfield’s Peter Parkers were loners in high school, but Holland’s Peter Parker has a friend. He has someone to talk to, to confide in, to turn to when confused and uncertain. And it help make Peter Parker a more rounded character. Because of this, I wish I could give Batalon the award of best actor—just as I wish I could give it to Keaton—but Tom Holland earned that award. More than any other element, his performance made Spider-Man Homecoming an entertaining movie.

In eliminating the origin story, the filmmakers gave us a coming-of-age adventure that is fun, entertaining, and dramatic. It feels right. Though I’m not an expert on superheroes, I think Spider-Man is unique because he’s the superhero we see grow up. So it makes sense that the first film of this reboot should be a coming-of-age story. To call the Maguire’s and Garfield’s failures is to say too much against them––I enjoyed all of them, including Spider-Man 3, generally panned by critics and fans—but now that I’ve seen a Spider-Man that got it right, I understand the other movies failings. Spider-Man Homecoming is a movie you should see, and I’m confident you will enjoy it. 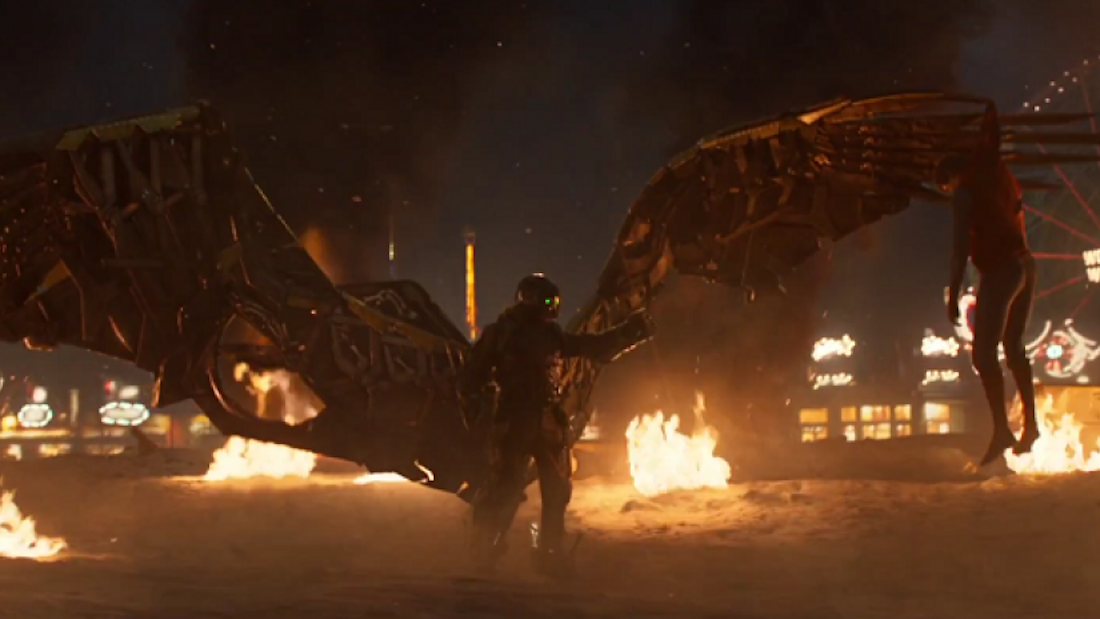