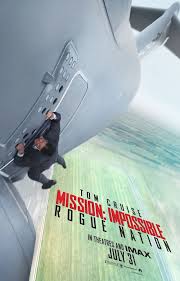 I have always been lukewarm to the Mission Impossible movies. Action is not my favorite movie genre, because I find the plots simple-minded, the characters stereotypical, and the action scenes–the genre’s bread and butter–overdone and predictable. (Car chases! Wow! Fist fights! Pow! Gun fights! Whoa! Who would’ve ever thought there would be a gun fight in an action movie?) Though the first three Mission Impossible movies were entertaining enough to willow away a Sunday afternoon, they failed to rise above the cliches that have flattened this genre. With Mission Impossible: Ghost Protocol (2011), I began to see potential with this franchise. With Mission Impossible: Rouge Nation (2015), the filmmakers realized that potential. Rouge Nation is a tense, suspenseful spy thriller that kept me rooted in my seat and my eyes aimed at the screen.

Christopher McQuarrie wrote and directed this film. Though this is the first time I’ve noticed the name, I am familiar with his work. He wrote the screenplay for one of my favorite crime movies, The Usual Suspects (1995, directed by Bryan Singer). Despite its title, there is nothing usual about this crime thriller, that concerns criminal mastermind Keyser Söze. Unexpected twist and turns defined that movie–along with a powerful performance by Kevin Spacey–and after watching both The Usual Suspects and Rouge Nation, I realized that unexpected plot points is McQuarrie’s strength. This is his fourth project with Tom Cruise. They have worked together on Valkyrie (2008), Jack Reacher (2012), and Edge of Tomorrow (2014).

At the end of Ghost Protocol, IMF agent Ethan Hunt (Tom Cruise) played a tape that mentioned a new mission against a mysterious organization, The Syndicate. Rouge Nation opens with Hunt and his team in full conflict against The Syndicate. Ving Rhames, Simon Pegg, and Jeremy Renner reprise their roles of Luther Stickell, Benji Dunn, and William Brandt. In the opening sequence, they seek to stop an airplane loaded with a cargo of chemical weapons from taking off. This in medias res beginning feels like the climatic scene of an intermediate movie that was never made, but it succeeds to convince us that IMF’s war against The Syndicate is on-going and involves several battles, several missions, and several climatic scenes.

It wouldn’t be a Mission Impossible movie, unless Hunt and his team had to work outside IMF authorization. This was achieve when the CIA Director Alan Hunley, played by Alec Baldwin, convinces Congress to disband the IMF and roll its assets into the CIA. He also declares Ethan Hunt a rouge agent to be captured or killed. Meantime, in a mission gone sour, Hunt spots a mysterious man who he later learns is the leader of The Syndicate, Solomon Lane (Sean Harris). This is the real beginning of Rouge Nation, and what follows is a tense drama that is equal parts action movie and spy thriller. Though the action sequences are hair-raising, it is the spy thriller–filled with twists, turns, and revelations–that elevates Rouge Nation above the staleness that inflects the action genre. McQuarrie proves you can entwine action set pieces, like gun fights and car chases, with dramatic acting to create a movie that both builds on a recognized formula while being fresh and innovative.

One of the biggest strength of this movie, and what sets it apart from the first three movies, is the use of Hunt’s team. In the first three Mission Impossible movies, Hunt’s IMF team serve as a support team. They sit in dark rooms, type on keyboards, open passage ways, and drive getaway cars or fly helicopters, while Ethan Hunt does all the heavy lifting. They were an action team with only one member who could throw a punch or shoot a bad guy. We see that changing in Ghost Protocol. In Rouge Nation, that change is complete. We now see an IMF team in which every member feels like a field agent who can enter the fray. As I mentioned above, they brought back familiar characters–Benji, Luther, and Brandt–and this is the first time in a Mission Impossible movie where Hunt has the same team as in the previous movie. (They wanted Paula Patton to reprise her role as Jane Carter, but a schedule conflict prevented that.) This added a continuity to the IMF team that I hope will continue in future installments.

Since it is an Mission Impossible movie, the team had to perform an impossible break-in that will provide Hunt with the intel needed to bait a trap for Lane. In Rouge Nation, this set piece exists, and the stunt work, perform by Cruise, is as impressive as always, but with the improved writing, it feels downgraded or out-shined by other set pieces, like the death-defying motorcycle chase through the Morocco mountains. That suits my taste, because I always felt the break-in sequences in the previous movies overblown.

Another problem I have with the franchise is its overuse as gadgetry and face masks. No matter how sophisticated or high tech a lock is, the team always have the perfect hand-held device for opening it. I understand that the filmmakers don’t want to waste valuable film time on lock-picking, but after seeing these devices used in so many movies, it makes me wonder why the bad guys even bother locking doors. The face masks are worst. The man in a face mask is an element they pulled from the 1960s television series, but I remember thinking, even as a kid, how unlikely the face mask deception would work. So you can place one man’s face on another. Great! I buy that. But what about differences in height and weight? Posture and gestures? Voice and speaking style? Gadgets and face masks are included in Rough Nation, but McQuarrie exploits them less than in the other movies, and when he does employ them, they feel more realistic. Again the superior screenplay pays off, because in Rouge Nation, interpersonal conflict drive the plot forward.

Better writing leads to better acting. So often these days, I find actors’ performances flat and unconvincing. I don’t feel like I’m watching a real human being; I feel like a man is remember lines. When I see this, I don’t blame the actors; I blame the writers. If the writer only create stereotypes, what can the actor do but give a flat performance. The acting in Rouge Nation never felt stale or flat. There is real pathos in this movie. More than once, I felt my eyes tearing up. Who expects to weep at an action movie? But weep I did, because I didn’t feel like I was watching Tom Cruise on screen with Sean Harris. I was watching Ethan Hunt play cat-and-mouse with Soloman Lane. The best movies make you forget you’re watching a movie, and for that to happen, the acting has to be perfect.

Another strength of this movie is its use of the female lead, Rebecca Ferguson as Ilsa Faust. There is an evolution in this franchise for creating stronger female characters as it progresses over time. Unlike Nyah’s (Thandie Newton) and Julia’s (Michelle Monaghan) damsels in distress, Ilsa will never have to be rescued. She can hold her own in a fray, and more than any other character in the franchise–male or female–she is Hunt’s equal in skill and daring. (I have more to say about this, but since what I have to say is full of spoilers, I’ll reserve it for a separate post.)

In the age of the sequel and the movie franchise, we have grown to expect that as a series progresses from movie to movie, we witness decline. We go to each movie full of expectation, but we leave shaking our heads and twisting our lips. “It was good,” we say to our friends and family, “but, you know, it’s not as good as the first one.” The Mission Impossible franchise breaks this trend. As the filmmakers refine their formula, each movie is stronger and more entertaining than the previous one. Though that improvement is subtle for the first three movies, we feel its effects in Ghost Protocol and witness its culmination in Rouge Nation.