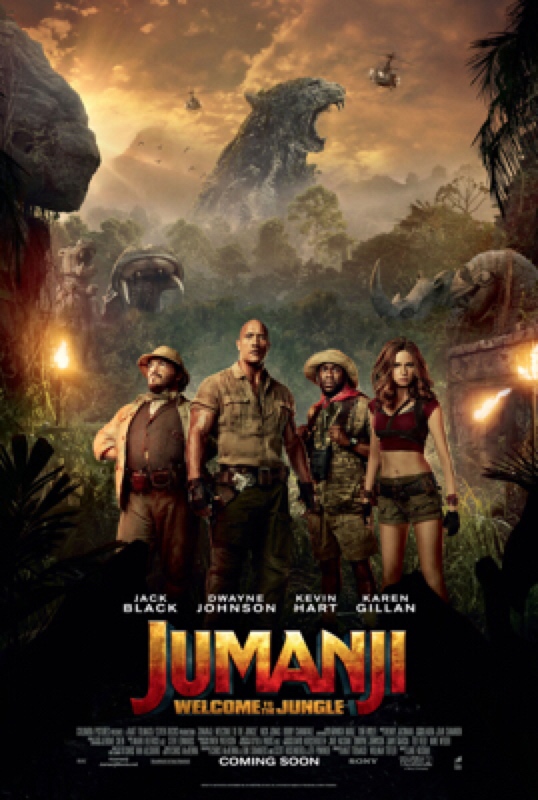 Though I’ve enjoyed every movie I’ve seen so far this year, I had been watching heavy movies, so last weekend, I felt in the mood for something lighthearted. Jumanji: Welcome the the Jungle looked promising. The trailers promised a funny movie, and the talent seemed poised to keep the promise. I like Dwayne Johnson and Jack Black. Though I’m not familiar with Kevin Hart, I loved Karen Gillan in The Circle, Oculus, and both Guardians of the Galaxy movies. When my Saturday movie time arrived, I headed to the theater prepared to laugh. Laugh I did! Though far from the greatest movie ever made, Jumanji: Welcome to the Jungle was an enjoyable experience with good humor and solid performances.

Jake Kasdan directed it. Based on a novel by Chris Van Allsburg, the screenplay was written by Chris McKenna, Eric Sommers, Scott Rosenberg, and Jeff Pinkner. Though not a bad screenplay, it’s predictability made it the movie’s weakest element. Watching the trailer, I knew the plot and the character arcs each of the four main characters would experience. But knowing the destination doesn’t necessarily ruin the ride to it. This was a fun ride. It’s the performances by the actors that made it so.

Dwayne Johnson plays Dr. Smolder Bravestone,the video-game avatar for a boy named Spencer. Since Spencer is the shy computer geek, Johnson had to play both the fearless explorer and the diffident boy underneath. The double role in a single body made this performance challenging, rewarding, and funny. I chose Johnson as an example, because he’s the leading actor, but Black, Hart, and Gillan faced similar challenges. Each delivered. Once again, Gillan impressed me. Since she’s fast becoming one of my favorite actors, I look forward in seeing her in more projects. She and Black gave the film its funniest scene, and she alone gave it its second funniest scene. That scene was also the most memorial moment in the movie. For that reason, I award her Best Actor. This gives Gillan the distinction of being the performer who has received the most accolades in my blog. 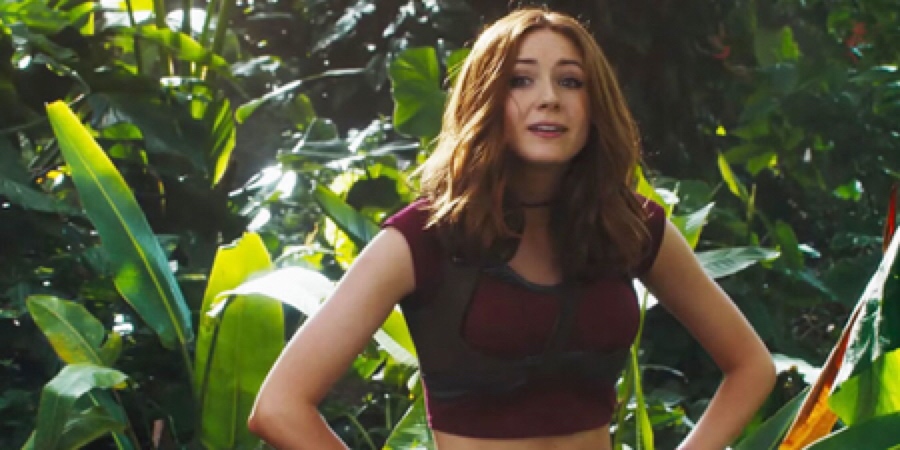 In tone, style, humor, and genre, Jumanji: Welcome to the Jungle reminded me of Brendan Frazer and Rachel Weisz Mummy movies. If you liked those movies, then you’re likely to like Jumanji. Though I feel certain about that statement, I’m less certain about it’s opposite. If you didn’t like The Mummy pictures, you might still like Jumanji. There’s something about it that I think will appeal to a broader audience. Expectations matter. When I went to see the original Mummy, I thought I was going to a horror movie, but it’s proper genre is fantasy comedy. I went to see Jumanji: Welcome to the Jungle knowing it was fantasy comedy. I left satisfied.

Like The Mummy and The Mummy Returns, I suspect Jumanji: Welcome to the Jungle will become a guilty pleasure of mine. When it becomes available for home viewing, I’ll buy it and I’ll watch it once or twice a year. I’ll watch it when I want to switch my brain off and laugh. It’s not a deep movie. It deals with themes about identity and overcoming personal challenges, learning to work with others, and accepting them for who they are. These are young adult themes, and important, but the movie’s handling of them was simple-minded and obvious. I haven’t read Chris Van Allsburg’s Jumanji, the book that inspired this movie, nor have I seen the original Jumanji film (1995), so I’m uncertain whether this simple mindedness comes from the book or is the fault of Kasdan and the screenwriters. Since Jumanji is a children’s book, it’s probably to blame. But that doesn’t mean the current filmmakers shouldn’t have handled the themes in a more sophisticated way.

Let me name a few other persons associated with this film. Nick Jonas plays Jefferson “Seaplane” McDonough, the avatar of a gamer who had been previously sucked into the game but never escaped. Rhys Barby plays Nigel Billingsley, a non-player character, who I like to call exposition man, because he told Spencer and the others what they needed to do to win. Bobby Cannavale plays Russel Van Pelt, the main antagonist. Laura Jean Shannon designed the costumes. I think there was some controversy that Gillan’s costume was too sexy, but since Ruby Roundhouse was a video game heroine, essentially a Lara Croft ripoff, the costume felt appropriate for the character. That’s true of the costumes all the actors wore. They were all more appropriate for the video game than the real world.

I wanted a comedy and Jumanji: Welcome to the Jungle gave me a comedy. I don’t see many comedies, especially at the theater, because I prefer drama to comedy. (But both are serious business!) Another reason I don’t see them is because modern comedies often disappoints me. Jumanji: Welcome to the Jungle didn’t disappoint me. I laughed early and often. I bet you will too. 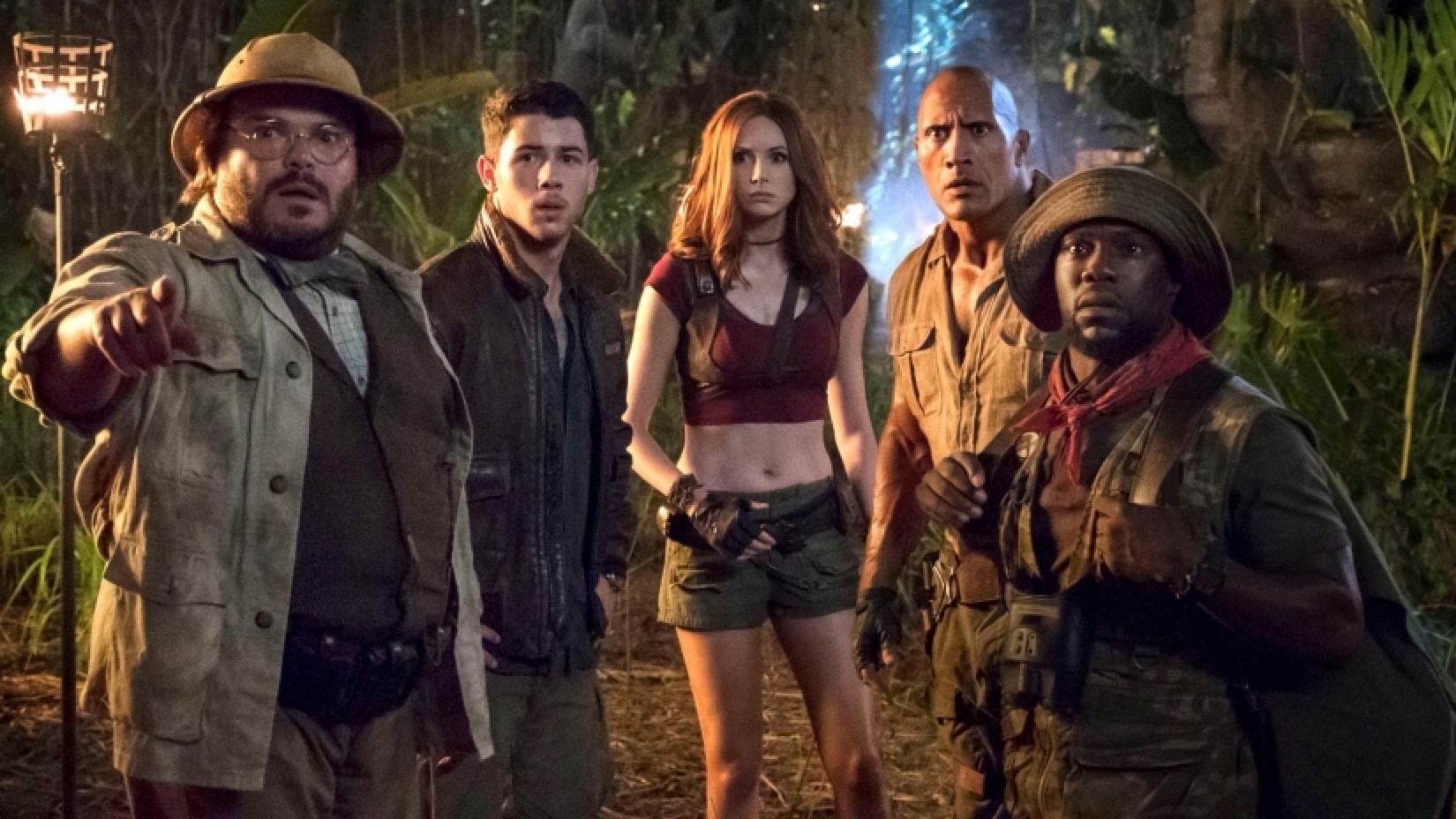