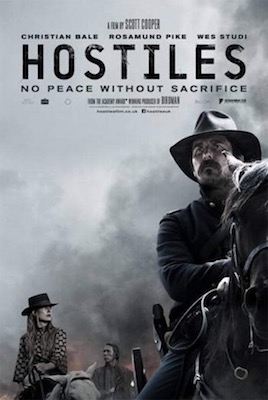 Hostiles begins brutal and it remains brutal throughout its runtime. It’s a story about war and the men and women who experience it. The Indian Wars are over, but the cultural conflicts and land disputes that ignited them remain, as do racial hatred and distrust. The film tells a personal story about Captain Joseph J. Blocker, a veteran of those wars, who must make peace not only with the enemies he had once fought but also with the violence he had committed against them. His story serves as a microcosm for The United States and our efforts to come to terms with the darker chapters of our history. There can be no nation without guilt, but in guilt we seek redemption. In Blocker’s quest for redemption, will America find it’s own?

Scott Cooper directed and wrote Hostiles, based on a story by Donald E. Stewart. There was a time when seeing a director serving as his own screenwriter made me cringe, but I think we had entered a new age in Hollywood, a new era of auteurism where the director-writer is giving us great movies, and Hostiles confirms this. Cooper’s writing sets Hostiles on a strong foundation. It gives the actors deep, rounded, and believable characters. Blocker experienced a dramatic character arc. He rethinks his life, examines his prejudices, and discovers a new purpose, even a new identity, for himself. As we follow him on this emotional journey, it becomes our own emotional journey. As the audience filtered out of the theater, I heard a wife say to her husband, “I’m glad it ended that way.” Yes, I think we all were satisfied with the ending.

What came before that ending was the most violent movie I’ve seen in years. That statement deserves explanation, because there is more violence in the average superhero movie, horror film, or action flick than in Hostiles, but that violence is stylized. It pumps our blood and becomes fun to watch. The violence in Hostiles is realistic and brutal. It forces the audiences to bear witness. Instead of building our excitement or inciting our fear, it leaves us stunned, shocked, angry, and shaken. Within the first few minutes, something happened. To avoid spoilers, I won’t tell you what it was. But when it happened I was stunned, both as a witness to the event, and as a filmgoer watching the movie. Most directors wouldn’t have done that, I thought. Most movies would’ve spared the audience that image. Cooper isn’t most directors; Hostiles isn’t most movies. This movie pulls no punches; it sugarcoats nothing. I like it for this honesty, this integrity, this courage. 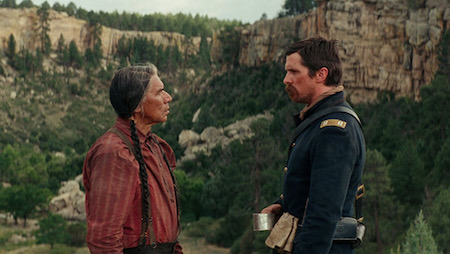 Christian Bale stars as Captain Blocker. He’s a soldier on the eve of his retirement, who’s given one last mission. He’s to escort an old foe, Chief Yellow Hawk, played by Wes Studi, back to his homeland, where Yellow Hawk, dying of cancer, can spend his final days. It’s a peace gesture the United States President wanted to make towards the conquered native people. En route, they found Rosalie Quaid (Rosamund Pike), a survivor of a massacre committed by marauding Cherokees. For her continued survival, Blocker allowed her to join his dispatch.

These are damaged people. Yellow Hawk has the cancer, but Blocker and Rosalie suffer their cancerous memories. Cooper never shows us these memories in flashback. Instead, he mentions them in dialogue and allows the audience to image the details. This proved to be an effective technique. It also forces the actors to emote. There were several closeups, especially of Blocker and Rosalie, where we sensed their troubled mind without knowing the exact course of their thoughts. Both Bale and Pike performed excellently, and it’s a coin toss to which deserve my best actor award. It’s with regret that I can’t give it to Pike, because she did such an excellent job, but Bale’s Blocker experienced the most dramatic character arc, and he performed each stage of that arc with perfection. The award goes to him.

I wish I could write more about Wes Studi’s Yellow Hawk, but my main complaint of the movie is that Cooper missed opportunities with this character. I put the blame on Cooper, who wrote the screenplay and filmed the film, rather than on Studi who performed his role well. In a movie about old adversaries burying the hatchet, I wanted both foes to have equal representation. I wanted Yellow Hawk to have his arc, as Blocker and Rosalie had theirs. Instead he came across as a McGuffin, a reason for the plot to start, but who became insignificant after it started. I don’t think that’s what Cooper intended, but that was what happened in the final cut.

Masanobu Takayanagi was the cinematographer. I’ve already mentioned the close-ups, which were beautiful, but let me now mentioned the long shots, the panoramic shots of the land, where the characters looked so small to the surrounding landscape, so insignificant to the greater world. They looked like ants on a foraging mission. The story that’s so important to us is so insignificant to Earth. Max Richter wrote the score that sounded as big as this land. Donald Graham Burt worked as production designer, and Jenny Eagen designed the costumes. Some might call Hostiles a Western, but I prefer to think of it as a historical drama set in the West. Burt’s and Eagen’s designs planted the film solidly in its period. I loved the costumes wore by the Native American characters, because they had elements both of the native traditions and of European influences. These were a people learning to become citizens in the nation that conquered them, and Eagen’s designs demonstrated this.

Hostiles runs for 2 hours 13 minutes. At times, its pace is slow, even lethargic, but at other times, it is sudden and violent. Either way, I was never bored. I recently watched a YouTube video about great movies that you can only watch once, because their themes are so depressing or disturbing. It had movies like Schindler’s List on it. Hostiles is like Schinder’s List. It’s a great movie, and you’re going to want to see it, but you’re probably not going to want to see it twice. It’s a dark, violent movie with strong, believable performances. Because of that panoramic photography, I advise you to see it on the big screen. 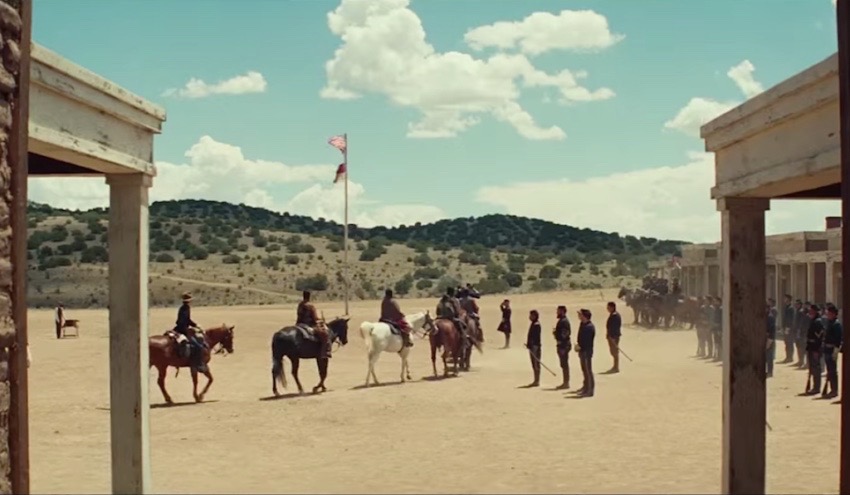