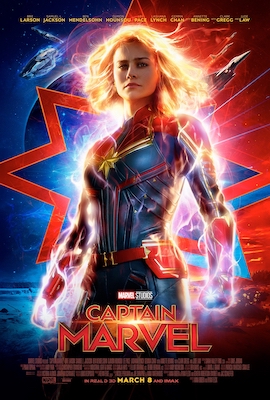 At the beginning of Captain Marvel, as the logo ran–I hear Jeremy at Cinema Sins groaning and watching the second hand–the MCU did something cool. I won’t tell you what it was, because I believe realizing it as it happened was part of the experience. But I wanted to mention it and let you know that it moved me. I hope it moves you too. Since it’s only the logo, whether it moves your or not isn’t a big issue. It will not affect your enjoyment of this movie. I said enjoyment, because I suspect most who see Captain Marvel will enjoy it. It is a home run. It’s not a grand slam; it’s not even an out-of-the-park home run. It’s more like an infield homer. But it scored the point it needed, and it gives the MCU another victory.

With Captain Marvel, I think the MCU wanted to achieve two goals for its universe. It wanted to introduced Captain Marvel before Avengers: Endgame, where she will join forces with Captain America and the remaining Avengers to reverse Thanos’ snap. Since it’s easy to guess that Captain Marvel will be in Endgame, since she’s now appearing in the trailer, and since the goal of reversing the snap is obvious, I’m not giving anything away here. We all know what’s going to happen in Endgame; we just don’t know how it’ll happen.

The second goal was to help transition the MCU from Phase Three to Phase Four. According to the Wikipedia page for the MCU, Captain Marvel is the penultimate movie of Phase Three, Endgame is the final movie of the phase, and Spider-Man: Far from Home is the first movie of Phase Four. We’ve had our Iron Man, our Captain America, our Thor–now it’s time for new superheroes, new adventures, and new wonders. I hope some familiar heroes continue to play a role in Phase Four and beyond, but Endgame will end the arc that began with Iron Man (2008). A new arc needs to begin, and Captain Marvel is the first piece of that arc.

I’m focused on that second goal because of a thought I had a few weeks ago. Endgame, I thought, will be the end of my excitement for the MCU. I’ll still see the movies–I never doubted that–but I won’t anticipate them as much. I won’t feel as excited about them. Can you blame me? It’s been eleven years since Iron Man. Endgame is going to be the 22nd movie in the MCU, and I have also watched some of the television series, like Daredevil and Jessica Jones. Along with keeping up with the MCU, I’ve been keeping up with the DCEU. Can anyone blame me if I feel sated in superhero movies? Can anyone blame me if I thought that after Endgame I would curb my enthusiasm for Phase Four and beyond. It was a naive thought, because…

Captain Marvel rekindled that enthusiasm I wanted to wane. It proved to me that the MCU has more to offer us movie lovers. The gold mine–if you can forgive a new metaphor–runs deeper than I knew, it has veins hidden to me, and it’s much richer than I could’ve guessed. Captain Marvel convinced me of that–both the movie and the character. She could very well be Marvel’s most powerful superhero. More than Iron Man, more than Captain America, even more than the wizard Dr. Strange and the god Thor, she’s an unstoppable force. She’s Superman without the Kryptonite allergy. If I have any concerns about her and her role in the MCU, it’s that she’s too powerful. It’s very likely that in becoming Captain Marvel–this is essentially an origin story–Carol Danvers a.k.a. Vers has forgotten how to bleed. 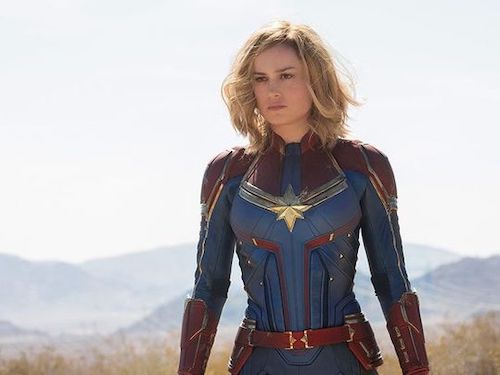 Brie Larson stars as Captain Marvel. I’ll cut to the chase and tell you that she’s wins my award for best actor. She was up against stiff competition that includes: Samuel L. Jackson as Nick Fury, Annette Bening as Dr. Mar-Vell and Supreme Intelligence, Jude Law as Yon-Rogg, and Ben Mendelsohn as Talos. There were unexpected appearances by Clark Gregg as Agent Phil Coulson and Lee Pace as Ronan the Accuser.

Anna Boden and Ryan Fleck directed Captain Marvel, from a screenplay written by them and Geneva Robertson-Dworet. The editors were Elliot Graham and Debbie Berman. These storytellers, I believe, should be credited with much of the success of this movie. They told a complicated story that was never confusing, except when the characters themselves were confused. Ben Davis was the cinematographer. Pinar Toprak wrote the score.

Captain Marvel is worth seeing. It has great action sequences, compelling characters, and a fun, exciting plot.