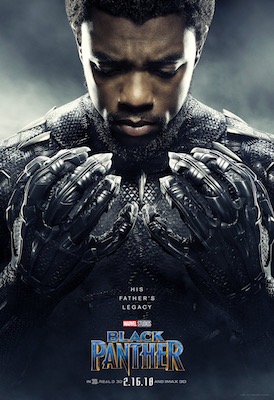 Captain America Civil War introduced T’Challa a.k.a. Black Panther. He’s a prince of the African nation of Wakanda, who became the king when his father was killed in a terrorist bombing. He’s also Black Panther, the protector of his people. In the build-up to Black Panther’s release, I realized that T’Challa’s character arc from Civil War was the most intriguing element from the movie. As such, it was the element I most liked. The arc took him from wanting revenge–a theme in Civil War–to realizing that revenge is self-consuming, hence self-destructive. He realized that revenge is not the same thing as justice. In this evolution, T’Challa found his moral compass; he established for himself an ethical foundation that is arguably superior to the ethics of any other Marvel superhero. Not bad for a supporting character! Of course, it left unanswered questions. The most pressing of which is: What comes next for T’Challa?

Black Panther answers the question. It picks up his story where we left it in Civil War, with his return to Wakanda following his father’s death. The country faces the sad task of burying one king while crowning the next king. Anyone who had studied history knows that royal successions are rarely smooth, peaceful events, and this one is no exception. Though many in the country support T’Challa’s ascension, there are others, critical of the former king, who fear T’Challa rule would be ineffective and against the national good. These dissenters encourages T’Challa’s enemies and rivals to usurp his birthright. So like the Captain America movie before it, Black Panther involves a civil war.

Though I left the theater loving the movie, I must confess that during the first reel, I felt disappointed. During the early film, it felt more like a James Bond thriller than a superhero action film. One scene reminded me so much of Skyfall that I worried the rest of the movie would be a ripoff. Don’t get me wrong. I love James Bond. But the reasons I go see James Bond movies are different than what I expect from a Marvel superhero movie. I no more expected to see T’Challa acting like the super spy than I would expect to see Bond subduing a rival by shooting spider webs from his wrist. During this segment, I heard myself sighing with disappointment. Fortunately, the movie was Bondesque for only a few scenes, before it returned to superhero action. 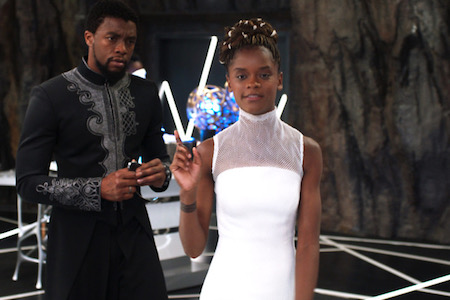 Chadwick Boseman as T’Challa and Letitia Wright as Shuri

Ryan Coogler, the director, cowrote Black Panther with Joe Robert Cole. I blame them for this digression into Bond territory. Maybe the blame lies with the comic book. Maybe espionage is part of the Black Panther signature, something that makes him unique, but I doubt it. Maybe it’s a inherent consequence of having a superhero who is also the head of state, but again I doubt it. It could be that they wanted to pay homage to Skyfall, but if so, they went too far. Homage is supposed to be subtle, low key, a whisper of familiarity or recognition rather than a shout. For whatever reason, this element in the movie didn’t work for me. The story was in Wakanda, and Wakanda is where it belongs, so what were they doing in Korea?

When the movie returned to Wakanda, it redeemed itself. I left the theater happy, excited, and knowing that I got what I came for. It speaks of the strength of Black Panther that it can take such a grievous misstep during the first reel and still end strong. Though part of the Marvel Cinematic Universe (MCU), Black Panther is unique as a superhero. All superheroes have their cover identity and their superhero alter ego–and so does T’Challa as the Black Panther–but Wakanda itself also has a public facade that conceals its secret identity. To the world, the country appears as your typical third-world African nation, struggling with drought, starvation, and poverty, but behind that facade lies a rich, technologically superior nation. In a very real sense, Wakanda is the superhero and Black Panther is the personification of that heroism. T’Challa, and by extension Black Panther, isn’t just fighting for his right to be king; he’s also fighting for the fate of his country.

That conflict makes Black Panther the most political of the MCU films. With politics come social issues. These themes come not from the protagonist, as you would expect, but from the antagonist. Michael B. Jordon plays Eric “Killmonger” Stevens. What makes for a good villain? There’s no secret formula, but one trait I look for is sympathy. Do I sympathize with the villain? I might reject his goals and methods, but do I understand his motivations? Killmonger’s motivations are easy to understand and accept. For centuries Europe and its offspring, America, had exploited Africa. For centuries whites had suppressed blacks. Killmonger believes with Wakanda’s superior technology, they can turn the tide, the exploiters will become the victims, the colonizers will become the colonized. In a word, he craves revenge. 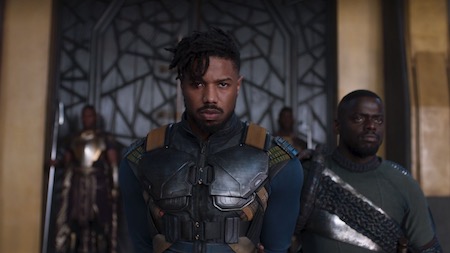 Thanks to Captain American: Civil War, we know what T’Challa thinks of revenge. Chadwick Boseman plays the young king, and to him I award best actor. His delivery was always smooth and calm, but laden with unspoken thoughts and emotions. Everything he said felt both literary and loaded with subtext. Superheroes tend to struggle with inner demons as much as they fight bad guys, but in this matter too, T’Challa feels unique. He’s confident. He has a strong moral compass, and he’s not afraid to follow it. What keeps him awake at nights isn’t inner demons but exterior questions about what’s best for his people, his country, and the world as a whole.

Warrior women is a favorite motif of mine. Black Panther gives us two examples. Nakia (Lupita Nyong’o) and Okoye (Danai Gurira) fought beside him in every action set piece. Another strong female character was Shuri (Letitia Wright), T’Challa’s sister, who was also Wakanda’s chief scientist. Maybe nepotism got her that job, but it’s clear she’s qualified for it. The banter between T’Challa and Shuri was the best relationship in the movie. Also in the cast, Andy Serkis was Ulysses Klaue and Martin Freeman was Everett K. Ross. Klaue had been a loose thread in the MCU since the Age of Ultron, but we now know what became of him. I like Martin Freeman, especially his work as Dr. Watson on BBC Sherlock, but I felt he was miscast as Ross here, and I don’t think the character brought a lot to the table.

Next to the Bondesque scenes, that’s my biggest complaint about the movie. There were too many characters, and not all of them were needed. Ross, Klaue, and Nakia felt shoehorned into the movie. I suspect they were characters in the comic books that the filmmakers felt oblige to include. I think they could’ve dropped Ross and Klaue and used the freed up film time to better develop Nakia. As T’Challa’s love interest, she had a role to play, but the relationship between them needed more work to set up that romance.

The action set pieces were exciting, but they weren’t memorable. The strength of Black Panther, what I do remember, is Wakanda. It’s a nation that is both traditional and futuristic Africa. The design staff, led by Hannah Beachler, deserves credit here. Ruth Carter designed the costumes–the most beautiful element in the film. I particularly liked the bright red warrior’s outfit worn by Okoye and her fellow guards.

Though flawed, Black Panther is a movie well worth seeing. It has great performances and an imaginative setting. It tells a dramatic story. Unlike other movies of the MCU, it is a self-contained story. You will benefit from knowing the events of Age of Ultron and Civil War, but that is not essential knowledge for enjoying and understanding Black Panther. As the first superhero movie of 2018, it sets the stage for a promising year. 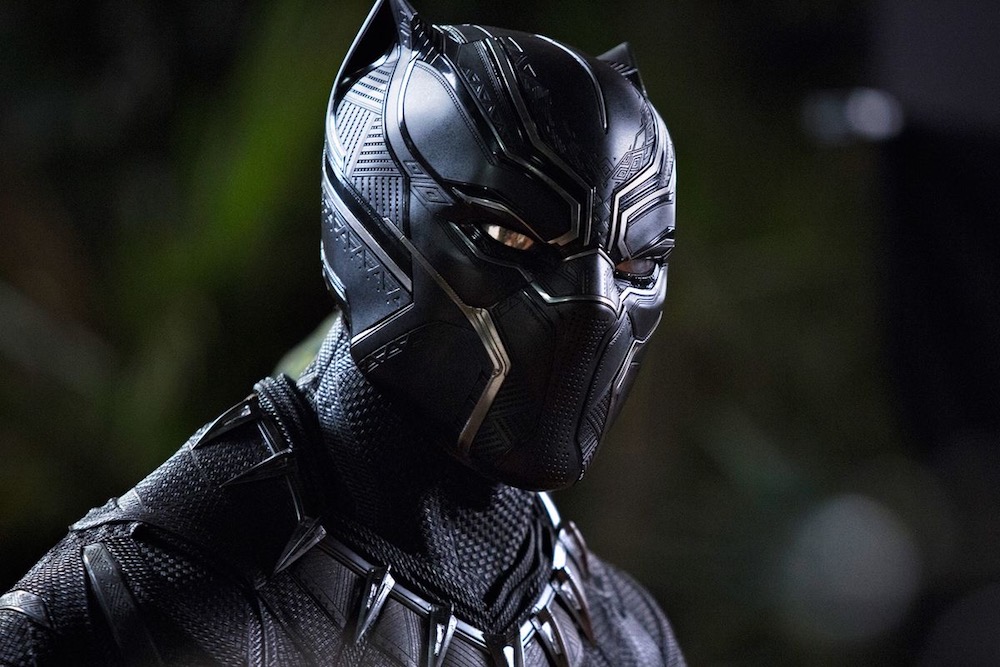