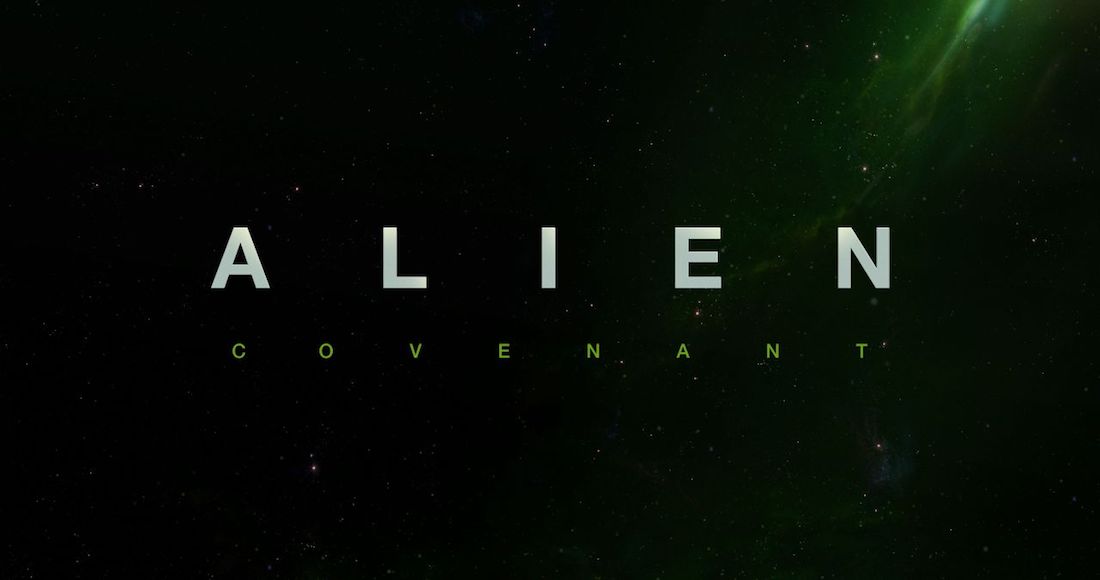 Always the procreate urge of the world,

Out of the dimness opposite equals advance, always substance and increase, always sex,

Always a knit of identity, always distinction, always a breed of life.

As I sat down to write this review about Ridley Scott’s latest installment in the Alien franchise, Alien: Covenant, I found myself thinking about these lines from Walt Whitman’s “Song of Myself.”  It is the human urge to create, sometimes through the sexual act, sometimes with our minds, often with our hands, sometimes for practical purposes, sometimes for aesthetic reasons, but often just for the thrill of bringing something into existence. Do we need any further reason? And in the act of creation, there’s an inherent and unavoidable act of destruction. We cut down a tree to build a table. The extrapolation of this is that we create our own doom. A dark prognosis of the human nature, but the Alien movies have always been a dark, pessimistic vision of our future. With Alien: Covenant, Scott added another gloomy episode to our demise.

Alien: Covenant, like the original Alien (1979), is a science-fiction horror film, and it can be enjoyed just for the thrills and frights it gives us. But unlike Alien, it is something more. It’s a thinking-person’s science-fiction that explores this theme of creation and destruction. It begins with a prologue scene between Peter Weyland (Guy Pearce) and his android creation, David (Michael Fassbender). It’s a curious scene, unnecessary for the plot, but providing key insight into David’s character. Weyland calls himself David’s father. He made his creation in his own image, not in looks but in attitude. He gave David an appreciation of the arts; he gave David the “procreate urge of the world.” 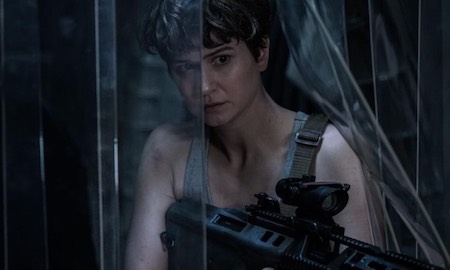 Alien: Covenant is a sequel to Prometheus (2012) but a prequel to Alien. Set in 2104, it takes place ten years after the disastrous Prometheus expedition but eighteen years before Sigourney Weaver’s Ripley had to battle the xenomorph. I think we had reached the point in the franchise where we need to think timeline. I know many of you started thinking timeline after seeing Prometheus, but after seeing that movie for the first time, I left the theater feeling numb. I knew I saw something important, something intellection, something intriguing, but I had to see it a few more times, before I could start making sense of it. Alien: Covenant draws Prometheus into sharper focus. It inspires as much thought and analysis as Prometheus, but it’s less of a puzzle. And it adds one more dot on that line between Dr. Elizabeth Shaw’s finding a cave drawing of a man pointing to a star and Ripley’s first encountered with the xenomorph.

The Covenant was a colony ship taking over 2,000 humans, including several embryos, to Origae-6. A disaster forced the crew to wake up from stasis to repair the ship. When they picked up a stray signal and traced it, they discovered an unknown world that appears better suited for colonizing than Origae-6. When they landed on the planet to explore it and find the source of the signal, they encountered the xenomorphs, but they also met David, the last survivor from the Prometheus. At first, he seemed their rescuer, but he had his own nefarious agenda. Instead of leading them into safety, he led them into doom.

Michael Fassbender reprises his role as David, but he also plays Walter, the synthetic—to use the movie’s term for android—of the Covenant. Walter, an upgraded version of David, doesn’t share David’s procreate urge. Already humans had realized giving synthetics the desire to create was a bad idea. As such, Walter is a calmer, less emotional, and saner version of David. It’s very clear that David has gone a little mad. During one scene, he recites Shelley’s “Ozymandias.”

My name is Ozymandias, King of Kings,

Look on my Works, ye Mighty, and despair!

The scenes between David and Walter are the most interesting, theme-driving scenes in Alien: Covenant. Fassbender portrays both David and Walter superbly. There was never any doubt which character he was in. Since he had to play two characters, I award him with the best actor award.

But Katherine Waterston as Daniels is the movie’s protagonist. Wife to the ship captain (James Franco), who dies early in the movie, she has to work through her grief while taking on her new responsibilities as the second-in-command. She bonds with Walter and clashes with the new captain, Oram (Billy Crudup). Noteworthy other actors include Danny McBride as Tennessee, a cowboy-hatted spaceman, who was the most colorful character in the movie. I loved every second he was on screen. He’s just a good ol’ boy who loves his John Denver and his Miller Time. But Amy Seimetz as his wife Maggie gave us the most frightening scene. Once again, the performance was excellent and precise. For this performance, I award her best supporting actor.

The visuals in Alien: Covenant were striking. I love the spaceship. It looked real; it felt tactile. If you have ever seen pictures of the International Space Station taken from another spacecraft, you know how it looks as it orbits Earth. That was how the Covenant looked as it orbited the planet. At no point in the movie did I think—as I often do with special effects—that looks fake! Everything from the xenomorph to the planet ecosystem to the space ship and other crafts blended together to create real places and real action in those places. Dariusz Wolski was the cinematographer. As you would expect for an Alien movie, the photographer was low-key and atmospheric. It was beautiful and eerie.

For me, the first enjoyment of a movie is its plot. After plot comes characters and character analyses. And then the theme. Theme, of course, is the most abstract and debatable element in a work of fiction. I think of the elements like plot, setting, and character development as what the writers and filmmakers bring to the story, but theme is what the reader or audience takes from it. I took from it the idea of the creation and destruction cycle and how these two acts are interwoven. Alien: Covenant is a scary movie. It has scary scenes in it, but what makes it most scary isn’t the xenomorphs. David is what scares me. In David, Ridley Scott created the link between man’s procreate urge and his propensity for self-destruction. It’s this theme that levers this movie out of just another science-fiction horror movie and turns it into a intellectual thriller.

An ideal movie review would touch base on the strengths and weaknesses of the movie, but I don’t think there’s any weaknesses to mention. Alien: Covenant is a movie that did everything right—from the screenplay by John Logan and Dante Harper to the directing by Ridley Scott to the performances by Fassbender, Waterston, and others. It tells a story that can be understood on the simplest level of narration but that also encourages the viewer to ask deeper questions about our procreate urge. 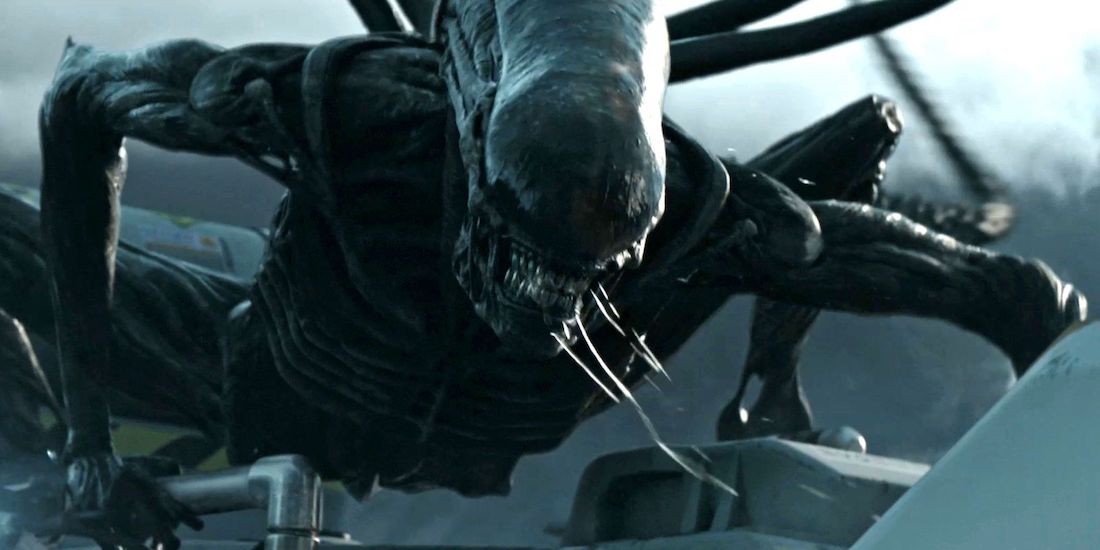