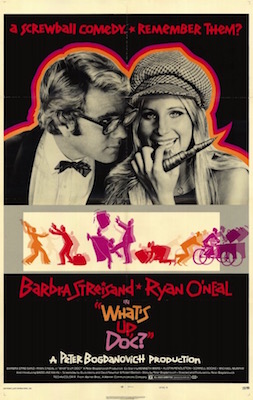 What’s Up, Doc? is a 1972 comedy starring Barbra Streisand and Ryan O’Neal. The plot centers around the the confusion caused when multiple matching bags arrive at the same hotel. Though two of the suitcases contain innocuous items, a third contains expensive jewelry, and the fourth, top secret documents. When the bags become mixed up, chaos ensues. What follows is a comedy-of-errors, as thieves, government agents, and innocent bystanders struggle to recovered the correct suitcase.

I don’t watch enough comedies. Though I love to laugh, when I watch a movie, I tend to select dramas, science-fiction, horror, action, or fantasy. I don’t tend to watch comedies. I blame my solitary nature. When I watch a movie, I watch it alone. But watching a comedy is best done with others. There is something inherently social about laughing in public, and jokes and funny scenes are funnier when enjoyed with others. But when I do select a comedy, I tend to select a classic screwball comedy. What’s Up, Doc? is one of my favorites; it’s a movie I revisit often. And though I’ve seen it multiple times, it never fails to make me laugh.

Peter Bogdanovich directed What’s Up, Doc?. He also gave us such wonderful films as Paper Moon (1973) and The Last Picture Show (1971). More modern, he co-wrote and directed the 2014’s She’s Funny That Way. Along with starring Streisand and O’Neal, the movie brags a rich supporting cast that includes Madeline Kahn, in one of her first roles, Mabel Albertson, Austin Pendleton, and Randy Quaid.

Though better known as a singer, in such movies as Funny Girl (1968), The Way We Were (1973), and A Star is Born (1976), Barbra Streisand established herself as a talented actress. In What’s Up, Doc?, she is in top form. She plays Judy Maxwell, a bright but fickle college drop out, who wanders the streets of San Francisco with no real intentions except to avoid facing her father. She seeks food and love. For the latter, she fixates on Dr. Howard Bannister, played by Ryan O’Neal. He’s a musicologist more interested in the tonal values of rocks than in romance. He arrives in San Francisco to compete for a grant, and he brings his overbearing fiancée, Eunice (Kahn). Though Streisand gave the best performance of the movie, the other stars came in a close second. Ryan deserves special mention for playing the stereotypical absent-minded professor in a way that feels both fresh and convincing.

It is a characteristic of screwball comedy for a female to challenge the traditional role of female submissiveness and to gain dominance over a male. Judy disrupts Howard’s life by becoming the pursuing partner in their relationship, by posing as his fiancée at important gatherings, and by visiting his hotel room uninvited. This usurpation is the main driving force of comedy in the movie. But the mix-up over the suitcases drives the plot and provided more comedy. It all ends in a beautiful, exciting, and funny car chase through the streets of San Francisco.

I watched What’s Up, Doc? through the subscription service HBO Now. It is also available as a DVD from Netflix, and for purchase or rental through iTunes or Amazon video. The rental price for both is $3.99. It has a runtime of 1 hour, 33 minutes, making it the perfect bedtime movie. Though it’s rated G, I don’t think of it as a family movie, but it is a good movie for couples, for date night. But if you have a solitary lifestyle like me, or crave alone time, there is nothing wrong with watching it by yourself. Strong characters, strong acting, and a funny plot makes this a must-see comedy. 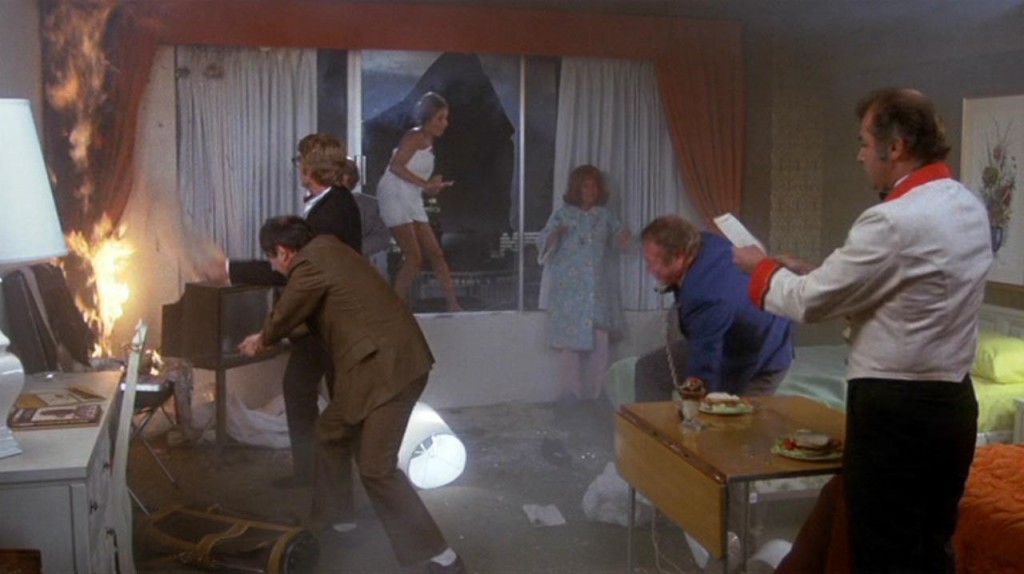