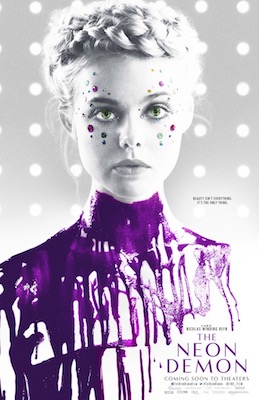 Hell no, Mr. Refn, The Neon Demon doesn’t have to make sense; it can wallow in obscurity. Just look at the films of David Lynch—obscure as all get out. True, he grounded these obscure plots in well-rounded, if quirky, characters, but you don’t need to worry about that. And it’s okay if the plot is thinner than a piece of Scotch tape. Just film some random, irrelevant scenes and we’ll use that Scotch tape to tape together something that resembles a feature-length film. We’ll market it as an avant-garde, New Wave art film and make any moviegoer who hated it think that they just aren’t smart enough to understand it.

“No,” I said to Jesse—as if she could hear me—”talking isn’t your strong point.”

At that moment, I knew The Neon Demon had lost me. I don’t talk to good movies; I don’t talk to compelling characters. I only talk to bad movies; I only talk to weak characters. Rubbing my forehead, as if it were giving me a headache, I debated turning the movie off. But I decided to watch it, because I review movies in my blog, and that means reviewing bad movies as well as good ones. It’s my purpose to steer viewers towards the better movies and the away from the worst ones, and that means I don’t have the luxury of just turning a bad movie off.

The Neon Demon is a rise-and-fall story, a staple in American literature, where we pride ourselves on our upward mobility opportunities. It is also a story about rivalry, because as we rise, others fall. Sixteen years old Jesse arrives in Los Angeles. She has no education, no family, and no money, but she’s beautiful. “But I’m pretty,” she tells her boyfriend, a photographer named Dean, “and I can make money off pretty.” After signing with a modeling agency, she begins her rise. But as she rises, she unseats a couple established models from their gigs—Gigi and Sarah. They join with their friend, make-up artist Ruby, who has her own grievance against the upstart, and they take their revenge.

Rise-and-fall stories are not supposed to have thin plots, but The Neon Demon suffers from thinness. Director Nicolas Winding Refn, perhaps knowing he had a thin plot or perhaps excusing his movie as an artsy film, padded the run time with inconsequential scenes, especially concerning a low-life motel manager, played by Keanu Reeves. The foundation of failure lies in the screenplay by Refn, Mary Laws, and Polly Stenham. It would’ve been much improved by deepening the rivalry conflict between Jesse and the other models, making each character more rounded, and leading to a more logical ending. I’m not going to say much about the ending, because it’s a twist ending that I didn’t anticipate. Twist endings are risky, because sometimes they work, but often they fail, and when fail, they bring the entire movie down. This twist ending failed. It made a bad movie worst. 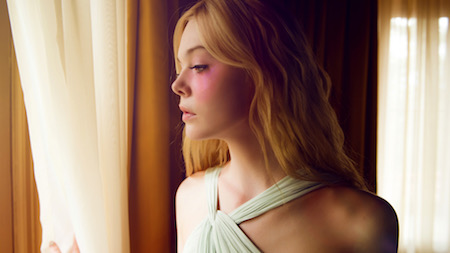 The screenplay failed long before it reached the twist ending. The film was filled with awkward silences, when characters just stood around and stared at each other. Though these silences were intentional, they incited another snide comment from my lips. “Waiting for the next line!” I envisioned a scenario where they had the screenplay written to this point, while the screenwriters ran back to the office to finish writing the scene. Meanwhile they left the camera rolling and the actors staring at each other. Silence can be very effective in film, and it was effective in The Neon Demon during one scene, but in other scenes, it felt awkward, unnatural, and irrational.

What makes this so frustration is they had the potential for a much better movie. The idea is intriguing; it’s the main reason I wanted to see The Neon Demon. And they had the talent to deliver on the idea. Elle Fanning—Dakota’s younger sister—plays Jesse. If her performance felt uneven and under motivated, I blame the screenplay that failed to develop the character. Jena Malone as the makeup artist Ruby earns my award for best actor in the film, even if her character was morbid and unforgiving. Bella Heathcote and Abbey Lee play the models Gigi and Sarah. If I’m confused about which is which, it’s became the movie made little effort to distinguished them. They both have the same character—aging model threatened by the young Jesse. Keanu Reeves plays a dishonorable motel manager. It’s a wasted role, because the entire motel subplot could’ve been ended up on the cutting room floor without impacting the main plot. The motel subplot is what the filmmakers did instead of building the main conflict between Jesse and the modeling world.

Even Refn, I believe, was too talent for what ended up on the screen. This Danish director has an impressive resume, with such films as Drive (2011) and Vahalla Rising (2009). But since he cowrote the screenplay and directed The Neon Demon, I blame him for its failure. I think he was trying to make an avande garde art film, because the film was beautiful and experimental. The true star of the movie is cinematographer Natasha Braier. If The Neon Demon has a reason to see it—in my case, to rewatch it—it’s the photographer. Bright colors, interesting lighting, and compelling composition makes it one of the most beautiful movies I’ve seen in the last few years. I do intend to rewatch it for the photography. It’s the only thing redeemable in the movie.

Most viewers, however, requires more. I suspect The Neon Demon, if it develops any following, will develop a cult following. I don’t smoke marijuana, but for those who do, this might be a good movie to watch stoned. That’s an uncharacteristic recommendation from me, I know, since I’m not one to advocate drug use, but it does feel like a stoner film. The broader audience, however, will find The Neon Demon too obscure and unstructured for enjoyment. It fancy itself a suspense thriller, but an essential ingredient of suspense is a sympathetic protagonist. Jesse is too underdeveloped to care about. If Refn wanted to make a commentary about the superficial nature of the fashion world, he would’ve done better by not creating characters with the same superficial indifference. Or perhaps it’s just a New Wave, avande gard movie, and I’m too stupid to understand it.