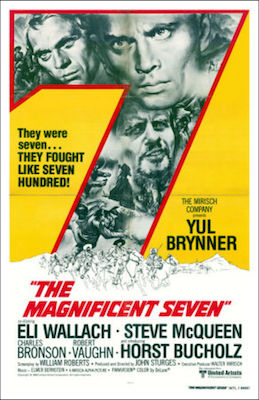 Hollywood find source ideas from several directions: from novels, short stories, and even  comic books, from historical events or biographies of remarkable people, from social crises and political unrest, and from old movies that they want to update for a modern audience. One favorite source are foreign movies that they want to translate for an American audience with stars familiar to that audience. In 1960, this process gave us The Magnificent Seven, an America adaptation of the 1954 Japanese film Seven Samurai. They did more than translated the screenplay into English and cast American actors. They also transformed the movie from the Japanese samurai genre to the American Western. In doing so, they created an entertaining action movie that, though rooted in the original source, is its own movie worth seeing for its own reasons.

John Sturges directed The Magnificent Seven, which was written by William Roberts. Uncredited in the writing were Akira Kurosawa, Shinobu Hashimoto, and Hideo Oguni, the trio who wrote Seven Samurai. Though the opening credits pay homage to the Japanese source and credits it with inspiring the American version, it’s unfortunate that the writers went uncredited, because many of the lines were direct translations from Japanese. Yul Brynner as Chris Adams and Steve McQueen as Vin Tanner anchor the cast, which include other mainstreams actors like Charles Bronson, Robert Vaughn, and James Colburn.

Since one movie became the source for the other, comparisons are not only inevitable but also are the very point of this review. I like reviewing different versions of the same story to see how they compare and differ. Though the presumption is that the original is better, that seems too easy to me. It is more useful to discuss what I liked about one version over the other. Though I agree that Seven Samurai is the superior movie, there is plenty to like in The Magnificent Seven.

It is the shorter movie. In translating it, they trimmed about ninety minutes from runtime. It made for a faster paced movie, a movie that feels more action packed. The trade-off is in character development. Since the protagonist is a group of seven individuals, each required their own development. Seven Samurai knew this, and Kurosawa, its director, took the time to introduce each samurai in his own way and to developed his character’s individuality. Though Sturges followed the same pattern, the same sequences, he rushed through these introductions. It robbed the characters not only of their individuality but also of their believability. For that reason, The Magnificent Seven didn’t have the same emotional impact as Seven Samurai. 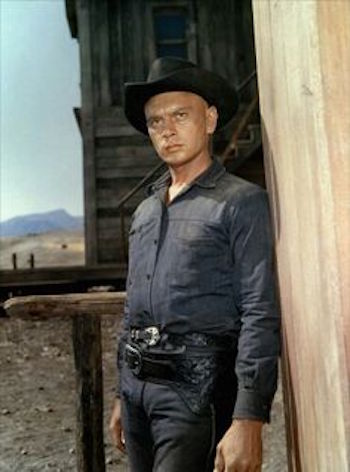 The one exception to that was Bronson’s Bernardo O’Reilly. Though I know I’m going to create haters with this confession, I need to admit that I’m not a Charles Bronson fan. Never have been; never will be. But I liked what he did in The Magnificent Seven. In the way O’Reilly related to the local children, he gave the movie its emotional impact it desperately needed. Bronson’s performance stands out as the movie’s most memorable.

Because, though they are the same story, they are not the same movie. Seven Samurai is a character-driven drama, full of emotion and tension. The Magnificent Seven is action-driven, shot-’em-up Western. Both have action and interpersonal conflict, but they have different weight to them. The main conflict in Seven Samurai is not between the samurai and the bandits; its between the samurai and the villagers. They must overcome their class differences and learn to work together to defeat a common enemy, and it’s that working together and the inherent relationships that are formed by it that creates the drama and the story arc. This exists in The Magnificent Seven, but it takes a back seat to the main conflict, which is the battle against Calvera and his gang.

Purest might argue that Struges and Roberts changed too much in translating the film, but I would argue that in these changes, The Magnificent Seven found its strength. I believe adaptations from foreign films often fail because they strive to be too much like the original. When they do no more than translate the screenplay into English and cast with American actors, something inevitably gets lost in translation. The Magnificent Seven knew that and it filled in the gaps with elements that are unique to America and to the Western genre. We don’t need an American Seven Samurai; we can watch the original and read the subtitles. We be literate people. But liking the story of seven warriors coming together to defend the innocent from abuse and injustice, we crave to see it rooted in an American setting, and The Magnificent Seven fulfills that craving.

The Magnificent Seven inspired several sequels over the next decade or so, creating what we now call a franchise, but the franchise faded away in the 1970s. This year, Hollywood is rebooting it with a remake starring Denzel Washington and Chris Pratt. In anticipation to this release,  I watched and review Seven Samurai earlier this month. I believed it earned it place as one of the great movies of all time. Though John Struges The Magnificent Seven lacks its depth and emotions, it also earned its place as a Classic America Western. 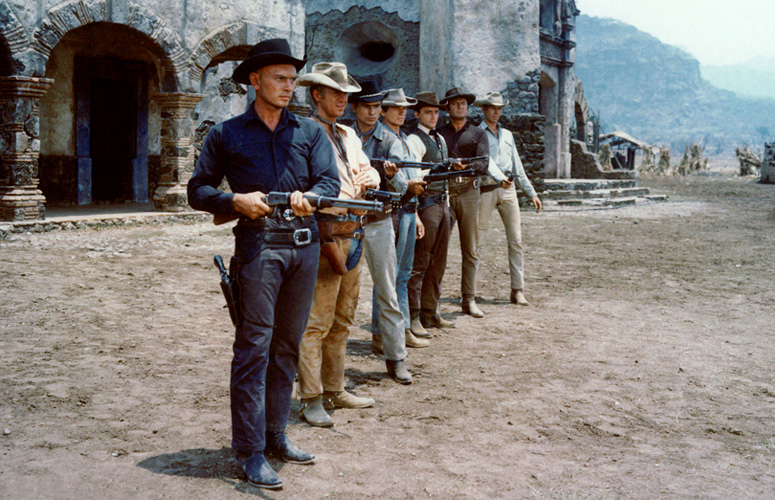