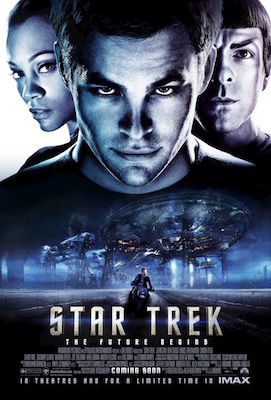 As a boy, I loved Star Trek. Though the original series played for only three years, reruns were always on. And I read the books, the Bantam adaptations of the episodes. When Star Trek: The Movie came out in 1979, I had to see, as I had to see the next two movies. I wouldn’t call myself a Trekie, because I never watched The Next Generation or any of the other spinoffs. And sometime during the 80s, my attitude about Star Trek reversed. I blame it on too much of a good thing. I reached the point when the thought of seeing another Star Trek show or movie repulsed me. If I saw a poster or picture of Captain Kirk or Spock, I cringed. If someone reference Star Trek in conversation–as people are wont to do–I rolled my eyes and curled my nose.

So in 2009, when the reboot was released, I was not an eager fan. I didn’t see the film, neither at the theater nor at home. It wasn’t until 2013, with the approaching release of the second film, Into Darkness, that I relented and rented the rebooted Star Trek (2009). I loved it! But that is too easy: Let me use my words. (And risk the animosity of all Trekies.) Star Trek is not only as good as the original series, or Star Trek: The Movie and its sequels, but it is better than them. Chris Pine is a better Captain Kirk than William Shatner, and though no one will ever be a better Spock than Leonard Nimoy, Zachary Quinto proved himself an excellent choice for the rebooted Spock. Star Trek not only rebooted the franchise, but it also rebooted my enjoyment of the franchise.

Directed by J.J. Abrams and written by Roberto Orci and Alex Kurtzman, based on the characters and the premise created by Gene Roddenberry, Star Trek rebooted the series and established an alternate timeline. Abrams established that new timeline in the first scene, when a Romulan spaceship from the future, the Narada, emerged through a wormhole to confront the USS Kelvin. This event is important not only for the plot of the movie but also for the future of the franchise, because it means the reboot doesn’t have to tell the same stories we already know about and have seen. What follows is fresh, new, and exciting. A cross-cutting montage intermixes the space battle with scenes of the birth of James T. Kirk, whose mother is escaping on a shuttle, as his father, George Kirk, played by Chris Hemsworth, sacrifices himself to give them time to escape.

Backstory is a key to this reboot’s success. If I say Chris Pine is a better Kirk than William Shatner, the reason is that Pine had more backstory to work with. At least a more interesting backstory. Kirk was born in battle. Of course, he’s a maverick; of course, he bends the rules to achieve the desired result; of course, he throws out the tried-and-true playbook and develops his own strategies and tactics. The tried-and-true playbook killed his father and left him fatherless. Along with developing Kirk’s backstory, the filmmakers also developed Spock’s. As a boy on Vulcan, a half-breed between a Vulcan father and an Earthling mother, he struggled to find his place and prove his Vulcan identity. These parallel backstories converge at the academy in San Francisco, where Kirk and Spock meet, not as friends but as rivals. That rivalry is an important subplot in the movie, and only after they resolve their differences can they join together to defeat the Romulan Nero.

For the battle against Nero is the main plot. He’s bent on destroying the Federation, one planet at a time, in order to prevent, he believes, the future destruction of his home world. I confess disdain over time-traveling plots. I hate them. More than that, I can’t believe in them; I can’t suspend my disbelief. All the implied paradoxes of time-travel get in the way, and not being Einstein, I don’t understand the physics. But I didn’t suffer that disdain during Star Trek. Abrams made me believe in the events as they were playing out on screen. He drew me into the story and kept me glued to my seat, so I didn’t think about paradoxes and the physics. There was only the story, the characters, and the conflict. This was true the first time I watched it, but it is still true now, after I’ve seen it multiple times.

Casting is another important key to the reboot’s success. Pine plays Kirk as a smug, confident, even arrogant maverick. Kirk’s womanizing is over-the-top and played for laughs, but this seems part homage to Shatner’s Kirk and part self-awareness that our attitudes about such things have changed. Quinto’s Spock struggles between emotions and logic, and as such, he continues to seek his place in the universe and his identity, his self-image. Understanding his backstory better, we better understand this dichotomy, and it frees Quinto to explore Spock as an emotional character. Quinto’s style is subtle, calm, but effective. Nimoy’s Spock never suffered self-doubt, but such doubt defines Quinto’s Spock.

They’re supported by the crew of the Enterprise. Since this is a reboot, it is also an introduction to the crew. We meet John Cho as Sulu, Karl Urban as Dr. Leonard “Bones” McCoy, and Simon Pegg as Scotty. Unfortunately, Anton Yelchin died earlier this year in an accident, so the upcoming Star Trek: Beyond will be the last time we see him play Chekov. Zoe Saldana plays Uhura. In the original series, Uhuru, as communication officer, was an important crew member, but in the rebooted franchise, she becomes a more active character. Other cast members include Eric Bana as Nero and Bruce Greenwood as Captain Pike, Kirk’s mentor. Leonard Nimoy reprises his role as Spock, who, like Nero and his crew, had time-traveled from the future.

Abrams is justly criticized for using too many lens flares. I suppose he thinks they are reflections off the instruments, but that’s not how light works, and as someone who works closely with photographers, he should know that. They are distracting. Other than that, the visuals in Star Trek are great. The Enterprise had never looked better, both inside and out. The CGI seamed flawlessly with the photography, so a I was unable to tell where one ended and the other began. That’s what we want with CGI but so often do not find.

To prepare for the upcoming release of Star Trek: Beyond, I watched Star Trek again this past weekend. Since I don’t count how many times I see a movie, I have no idea whether this is my fifth or tenth time in seeing it. But I do know that each time I see it, my appreciations of it grows. With the exception of those distracting lens flares, everything–from the acting to the action, from the dialogue to the musical score by Michael Giacchino–contributed to create an exciting, action pack film.