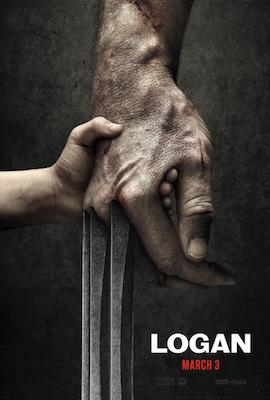 Logan, without any doubt, is my favorite X-Men movie. It is the X-Men film I’ve been waiting for, without knowing, until I saw it, that I wanted it or that I was waiting for it Yes! I thought. That’s an instant favorite! I’ve been thinking that a lot lately, with such movies as Star Wars: A Force Awakens, Split, Star Trek: Beyond, A Cure for Wellness, and Mission Impossible: Rogue Nation. I think we’re living in a great time for movies, a time when talented directors, writers, actors, and other artists are producing films that will stand against such films as Psycho, Gone with the Wind, and The Godfather as the best films ever. That’s a bold statement, since such measure requires the passage of time to judge, but I’m confident that this period—if not the exact films I named—will stand that test of time. Hollywood seems to be fusing the sensibilities of the independent filmmakers with the powerful budgets of the major studios to give a collection of films that are both entertaining and thought-provoking. Logan stands as a new and powerful entry in that collection.

This surprises me, because I’m not a great fan of the X-Men franchise. I’ve liked the movies, found them entertaining, but never felt myself wiggling with excitement for the next installment. In fact, I’ve skipped as many X-Men films as I’ve seen, among them, X-Men Origins: Wolverine (2009). After watching The Wolverine (2013), the other stand-alone Wolverine movie, I left the theater thinking: The X-Men are better as a team than in stand-alone adventures. In truth, I considered these movies popcorn flicks, great for sodas and the buttery treat, but lacking needed protein. The filmmakers used the films to explore important themes about racism and discrimination in America, but these themes are overpowered by special effects and superhero violence. Other films deal with the same themes in more effective and direct ways. There’s nothing wrong with that. There’s nothing wrong with a movie being more entertaining than intellectual. But such films tend not to make my favorites list.

Despite my lukewarm option about X-Men movies, I was excited to see Logan. The trailer convinced me that it was a darker and more personal exploration of the Wolverine, an exploration that involving introspection and regret. I felt a desire to see Patrick Stewart reprise his role as Charles Xavier, and when I heard this would be Hugh Jackman’s last outing as Logan, the deal was sealed. I felt intrigued by the girl, Laura (Dafne Keen). And it didn’t hurt that Johnny Cash’s cover of “Hurt” played during the trailer. I don’t listen to Cash often, but when I do, it tends to be “Hurt.” It’s a sad song that reenforced the trailer’s theme of introspection. It’s a beautiful trailer, a piece of art itself that set the tone for the movie without revealing too much of its plot.

There is no formula for a good movie. One of Hollywood’s chief fallacies is that there is a formula, and they keep applying that formula over-and-over again, especially in these superhero action films, to create movies that are fun to watch but redundant in plot and characters and themes. Though a superhero film, Logan is not that formula. What makes Logan great is the way it breaks from the formula to establish its own balance—a balance between comedy and tragedy, between action and drama, between violence and pathos. It is a balance between the exterior conflict of helping Laura escape her pursuers and Logan’s interior conflict of regret and redemption. In past X-Men films, Logan’s goal had always been to understand how he came to be and who he was prior to his adamantium claws. In Logan, he struggles not with who he is but with what his life means.

Dafne Keen as Laura and Hugh Jackman as Logan

Introspective movies tend to suffer two vices: they tend to be slow moving and they tend to employ voiceovers. Logan suffers neither vice. The chase plot keeps the action moving. And there are no voiceovers. I hate voiceovers; I very rarely see them used effectively. They often become crutches, usually insisted upon by the studio executives, who do not trust the director, the photography, the dialogue, and the actors to tell the story. And since so much of Logan involves his emotional arc, I’m sure they had the conversation about whether to use voiceovers. They made the right decision in avoiding them. Audiences are smarter than Hollywood often assumes them to be. Logan gives a nod to that intelligence; it trusts us to understand the story and the characters without giving us someone off screen telling us what’s happening or what to think about it. It allows us to come to our own ideas, to employ our own interpretations, and I love the movie for it.

James Mangold, who gave us such winners as Girl, Interrupted (1999), Walk the Line (2005), and 3:10 to Yuma (2007), directed Logan. Along with Scott Frank and Michael Green, he cowrote the screenplay. This is his second outing working with the character; he directed 2013’s The Wolverine.

There was no acting misstep in Logan. It was interesting watching Patrick Stewart play an older, more cynical Charles Xavier. Boyd Holbrook as the antagonist Pierce presented a character full of self-righteous evil. Stephen Merchant plays Caliban, the voice of reason in an unreasonable world. Hugh Jackman found depth and pathos in Logan. I suppose if you play a character as long as he played Wolverine, you are bound to get very good at it. Of all the X-Men, the Wolverine interested us the most, because he’s the one with the most interesting backstory and the most dramatic internal conflict. In Logan, that internal conflict comes to fruition, and Jackman performed it brilliantly.

But my reward for best actor in the film goes to Dafne Keen. Children actors are often uneven, but she never was. Laura suffers her own internal conflicts, her own external violence, and her own interaction between them. I think of two scenes where Keen breathed life into Laura. In one, she eats a bowl of cereal, as she’s well aware of bad guys sneaking up on her. A subtle movement of there eyes say it all. In the other scene, after a movie of silence, she breaks out in a rage. On one hand, it’s a child acting up—as children are wont to do—but on the other hand, tragedy beyond comprehension drives this rage. Keen emotes it beautifully—in both English and Spanish.

It took me a lot longer to write this review than normal. Usually when I see a movie in the theater, I try to have the review written and posted during the following week. But I saw Logan two weeks ago, and I saw it again this past weekend. This is a movie full of protein, and it took me longer than normal to digest it. Metaphor aside, Logan is a movie that required some reflection for me to know what I wanted to write. There’s so much to love in this movie and very little to hate. It’s a solid story about intriguing characters suffering both internal and external conflicts. As the final credits played, Johnny Cash’s “A Man Comes Around” plays. It’s the perfect song to close the movie about the Wolverine finding redemption.