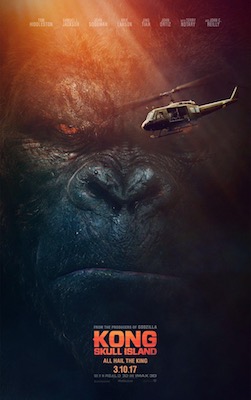 There is a scene early in Kong: Skull Island where Vietnam-era Hueys fly low over the ocean in attack formation. It’s a beautiful shot, reminiscence of Apocalypse Now, which I suspect it was meant to homage, but I couldn’t help but think how much better it would be if “Ride of the Valkyries” played during the scene. Of course, that would’ve taken homage and turn it in plagiarism, but the shot begged for that music. (Ah, Francis Ford Coppola! Will I ever match your genius?) Precluding the World War Two prologue, Kong: Skull Island begins on the day President Nixon announced the end of combat in the Vietnam War, and as the movie played, I realized one interpretation of it was to see it as a metaphor for that war. We went into a strange land to wage war against an enemy, who we both misunderstood and underestimated, to achieve an objective that was, at best, vague and dubious, and, at worst, immoral. And so to Skull Island we go—lesson not learned!

Kong: Skull Island is an action-packed, CGI-heavy, fantasy film. It stars such veteran and familar actors as John Goodman, Samuel L. Jackson, John C. Reilly, and Tom Hiddleston. Brie Larson stars as Mason Weaver, a photojournalist who made a name for herself in Vietnam, and who wanted to further her career by embedding herself with this secret expedition to Skull Island. In my review of the 1976 King Kong, I had said that King Kong movies feel like they belong more to the female lead than to the director, but that is not the case with Kong: Skull Island. In breaking away from he traditional plot, they broke away from the importance of the female lead. This is an ensemble movie where several characters share equal importance, so Larson’s Mason Weaver feels no more important than Hiddleston’s James Conrad, Reilly’s Hank Marlow, or Jackson’s Colonel Packard. I fear this is a weakness of the story, its inability or unwillingness to give us one central character through whose eyes we can view and judge the action on the screen. 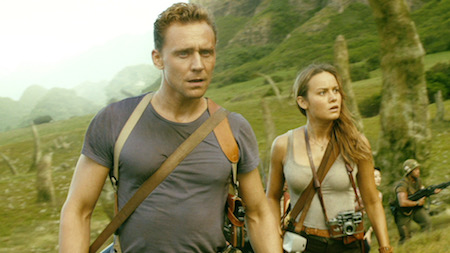 But I think it’s best to think of Kong as the true protagonist of the movie. In the past movies, he’s been the antagonist, the monster who demanded human sacrifices and destroyed New York City. In Kong: Skull Island, he’s the protagonist protecting the island and its inhabitants from a lizard-like creature that crawls out of the ground, and from these new invaders, the US Army and their entourage. Though Kong as protagonist makes perfect sense to me, I wonder if writers Dan Gilroy, Max Borenstein, and Derek Connolly intended it. Nothing in the movie is told through his point-of-view, and in one scene, Mason and Marlow needed to rescue him. Neither disqualifies him from being the protagonist, but together they make the mantle of protagonist a little baggy for his shoulders. They gave him a much-needed backstory to explain why he’s the last surviving giant ape. I appreciated the writers for that, because previous King Kong movies ignore biology. That was acceptable, because in them King Kong is more fantasy than science fiction. But since Kong: Skull Island strives for a more realistic story, Kong needed to be grounded in life and biology. 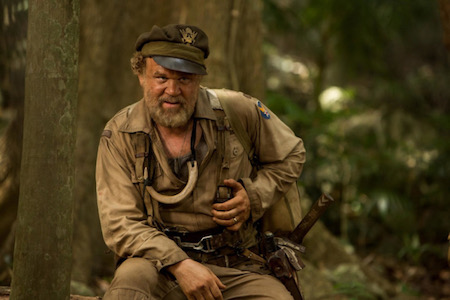 The effects were great—the true star of the movie. There were a few shots where I felt the green screen could’ve been better blended with the CGI, but mostly the effects were convincing. They are the reason to see the movie, and like any movie based on special effect, I believe the experience justifies seeing it at the theater rather than home viewing. But special effects aren’t what drives me to the theater. I’m interested in the story—the plot, the characters, the setting, and the themes. The story could’ve been tighter, and the characters needed more development. As I said above, the ensemble cast deprived it of a solid lead. John C. Reilly as Marlow deserves my award for best actor of the film. Marlow at least seems the most interesting character—besides Kong.

From a literary prospective, Kong: Skull Island feels like a homage to Joseph Conrad and his novel Heart of Darkness. The novel and the movie share elements. Both have an expedition into the jungle, both have a river and a riverboat in bad need of repair. Both explore the theme of modern men invading primitive environments, and both involves someone “losing it” or discovering his own primitive nature. Since Hiddleson’s character was named Conrad and Reilly’s was named Marlow—the name of the narrator in Heart of Darkness—I believe this comparison was deliberate. It also gives evidence that the helicopter scene, described above, was a homage to Apocalypse Now, since Apocalypse Now was a retelling of Heart of Darkness.

Jordan Vogt-Roberts directed Kong: Skull Island. He presents us with an interesting and entertaining movie. The writing could’ve been tighter, but the photography by cinematographer Larry Fong was beautiful, and the acting and special effects were convincing. As a literary person, I’m intrigued by its debt to Heart of Darkness. It steers the Kong mythology into a new direction that feels better suited to modern sensibilities and takes advantage of current movie technology. It wasn’t a great film, but it was a fun popcorn flick, and I recommend seeing it. 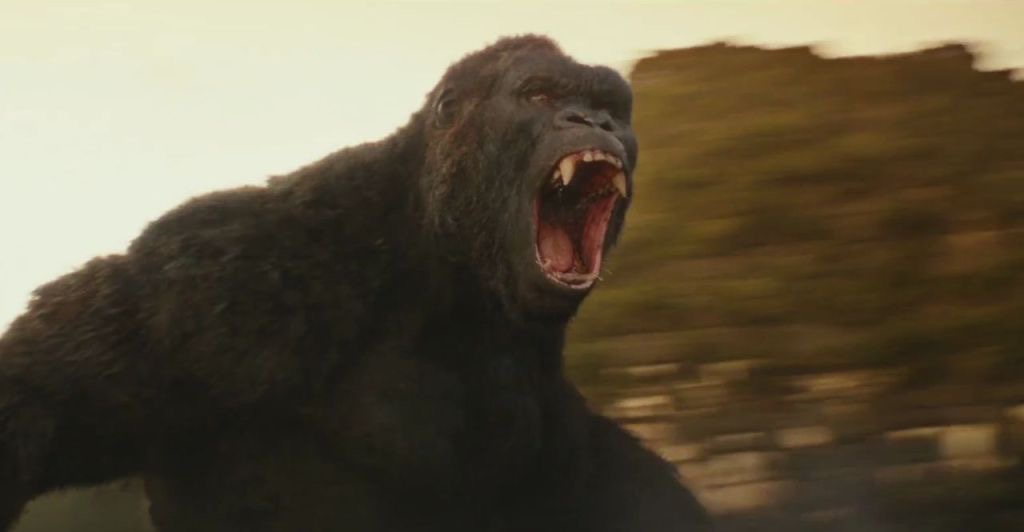