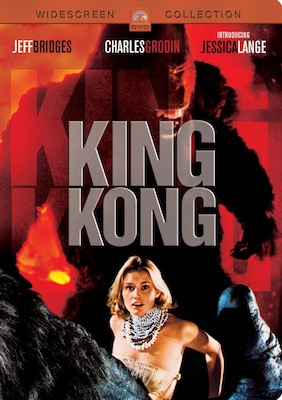 Merian C. Cooper was an adventurer, who joined Pershing’s expedition in the hunt for Pancho Villa, who flew for the United States during World War I, and for Poland in the Polish-Soviet War (1919-1921). Later in life, he made a Hollywood career as a screenwriter and director, and in said role, he created the beast we know as King Kong. Along with Ernest B. Schoedsack, he directed the 1933 film that introduced Kong to the American moviegoer. While growing up, I saw this film on television but never in the theater. In those days, seeing a movie on television—interrupted by commercials and abridged to fit a time slot—was a far cry from what we can achieve today with home viewing. So the 1976 film, starring Jessica Lange and Jeff Bridges, was the first King Kong movie I saw in the theater. I felt excited to see it. There was a lot of publicity about this movie, about how the filmmakers created a 40-foot tall Kong robot and about the controversial scene where Jessica Lange bears her breast. Jessica Lange was a nobody back then—King Kong introduced her—but I was a teenager and seeing naked breasts was a big deal. After seeing the movie, I left the theater thinking: Great movie!

But as I said, I was a teenager, and my critical skills weren’t well developed. With the build-up to Kong: Skull Island, I decided to rewatch King Kong. Now that I’m older, now that my critical skills—hopefully—are better developed, I no longer think of it as a a great movie. It has entertaining moments, but overall I found it disappointing.

Before I continue, I want to warn you that this is not a spoiler-free review, , because who doesn’t know the story? We know the story from Fay Wray’s version to Jessica Lange’s to Naomi Watts’. (It seems right to think of these movies as belonging to the female lead.) Even if you’ve never seen a King Kong movie, you know the story through multiple cultural references.

King Kong tells the story of the expedition to Skull Island that found a giant ape. For an environmental rapist reason, they decided to bring Kong back to New York, where they staged a show. In the excitement, Kong grew angry and escaped. He destroy much of the city, captured Dwan (Lange), and climbed the World Trade Center. Helicopters came, shot him, and he fell to his death. With a few changes in the details, it’s the same story told in the 1933 original. It’s a take on the beauty and the beast theme that has inspired us for centuries—perhaps since the beginning of literature—and which still inspires us, as evidence by Disney’s life action Beauty and the Beast being released this year. Since the elements for satisfaction are there, what went wrong? Since the 1976 movie satisfied the teenager, why does it fail to satisfy the adult?

The special effects were good. Some effects failed to hold up over time, but they were the best that 1976 technology could muster, and many more effects still look convincing. The acting was also competent. Competent, not great, not compelling, but competent. The directing by John Guillermin and the photography by Richard H. Kline deserve the same lukewarm compliment. I guess this is part of my problem with the film. Everyone did as expected; no one did more than what was expected. Nothing stands out as exceptional in King Kong, not even the 40-foot robot, which was on screen for only one minute. The movie feels formulaic in the worst way; it’s paint-by-numbers filmmaking. They knew they had a money maker. They had a story with a proven appeal, a director with a history of delivering the goods, a male lead with growing star power, and a fresh actress destined to be the next great Hollywood beauty.

I think the principle failure, however, lies in the screenplay. Lorenzo Semple, Jr. wrote the 1976 screenplay. Though he grounded that screenplay in the 1933 version, written by James Creelman and Ruth Rose, he strived to update it to 1970s sensibilities. He made the expedition to Skull Island a search for oil, and as such, he worked in social criticism about the corrupting power of greed and the destructive impact the developed world has on nature. That message had always been implicit in King Kong, but this screenplay brings it out of the subtext and makes it overt. It turns oil companies into evil antagonists, and though that’s a popular opinion, it sets the wrong tone for a monster flick. 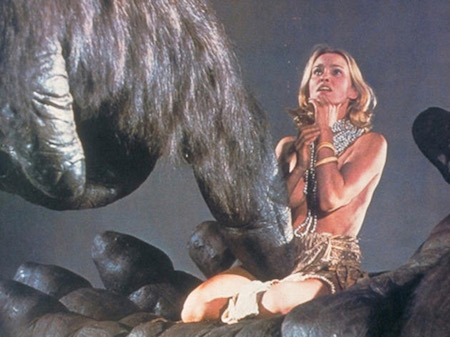 The main thing that seems disjointed to me as an adult was the very thing that thrilled me as a teenager—the sexualization of the female lead. The sex was implicit in the 1933 film, but once again, 1976’s King Kong took the subtext and amplified it, until it felt false and overt. We meet Dwan as she floats up to the ship in a lifeboat. She wears a black dress; its wet fabric clings to her figure in a revealing manner. Later, for no reason that has anything to do with the plot, there’s a shower scene. As she steps from the shower, we don’t see her breasts, because she covers them with a towel, but we do see her naked profile. And later still, after Kong claims her as his bride, there are more scenes involving wet clothing and sexual suggestions. In one, Kong’s giant finger pulled the bodice of her gown down. I understand why I, as an eighteen-year-old teenager, wanted to see her breasts, but I’m still scratching my head wondering why Kong wanted her naked.

The environmental message joins with the sexualization to makes 1976’s King Kong feel force and contrived. I enjoy Charles Grodin’s performance as Fred Wilson, the oil company executive in charge of the expedition, and I love many of the special effects in the movie, but as a whole, the movie promised something it never delivered. Though it has fun moments, it is the weakest of the three King Kong movies.