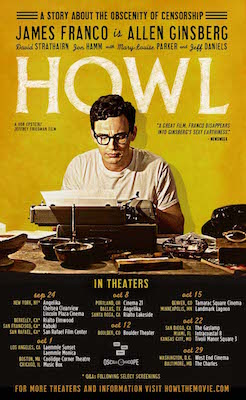 In 1955, the American poet Allen Ginsberg published Howl and Other Poems. He published it with City Lights Books in San Francisco. In 1957, Lawrence Ferlinghetti, the publisher, faced obscenity charges for publishing and distributing the book. The title poem, “Howl,” in particular was considered obscene. But it has since become a classic America poem, arguably the anthem of the writers we refer to as the Beat Generation. Whitmanesque in style, the poem begins:

I saw the best minds of my generation destroyed by

dragging themselves through the negro streets at dawn

looking for an angry fix…

Though it is a remarkable poem, well worth reading, this review is not about the poem. It is about the 2010 movie, also named Howl. I watched this movie by accident. Knowing that there was a movie about the Beat Generation, and their time at Columbia University, I believed Howl was it. I placed it on my Netflix DVD queue, and when I received it, I plugged it into my player and watched it. I knew within a few minutes that it was not the movie I thought it was. It proved to be a happy mistake, because Howl was an exciting, interesting, and provocative movie. Unique in style and structure, it broke me out of my comfort zone.

It began with a simple disclaimer, telling us that every line in the movie was actually spoken by a real person. In this way, the movie resembled a documentary. But the disclaimer went on to say that in all other ways, it was nothing like a documentary. Written and directed by the team of Rob Epstein and Jeffrey Friedman, Howl is a hybrid between documentary and fictional narrations. It weaves together life-action with animation to not only recite us the poem but also to tell us the story of the poem. After watching it, I thought of it more as a tapestry than a movie. It seemed to be something beautiful that I wanted to hang on the wall.

James Franco stars as Allen Ginsberg. He stands in front of a crowd in a smoky barroom and recites the poem. Or he wanders around his New York apartment and answers interview questions. We see him trying to seduce Jack Kerouac (Todd Rotondi) or Neal Cassady (Jon Prescott), or we see him forging a relationship with the man who would become his life-long partner, Peter Orlovsky (Aaron Tveit). Interwoven with these scenes, we see the obscenity trial. Andrew Rogers plays Lawrence Ferlinghetti, but it is a nonspeaking role. At the trial, the lawyers do the talking. David Strathairn as Ralph McIntosh acts as the prosecutor, and Jon Hamm as Jake Ehrlich defends Ferlinghetti. Together they call expert witnesses played by such veterans actors as Jeff Daniels and Mary-Louise Parker. Bob Balaban stars as Judge Clayton Horn, who must decide the case. 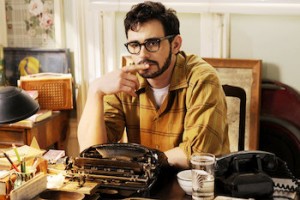 And interwoven between these scenes are animated scenes as the poem is recited in a voice over. Eric Drooker, who had collaborated with Ginsberg with Illuminated Poems, provided the animation. Like the poem it depicts, the animation is edgy. Send the kids to bed first, because it depicts violence, drug use, and sex. As I watched animation, I was reminded of the 1982 movie Pink Floyd The Wall. It has the same style, the same blunt force, the same brutal honesty.

“Howl” is a poem meant to startle and challenge a complacent society. Howl is a movie that captures that spirit. After watching it, I sat spellbound in my chair and thought, Wow! It had been years since I had read the poem, but once I emerged from my delirium, I ran for my copy of Howl and Other Poems and read it again. I don’t know that I had ever appreciated it before. As I had written about the Beat Generation before, in my reviews of Kerouac’s novels, they are writers who interest me but whose work I have always found inferior. Now I know that Ginsberg’s poem is not inferior. I read it aloud, no doubt disturbing my neighbors with my rising voice, because “Howl” is a poem best recited in a howl.

I’m with you in Rockland

where we are great writers on the same dreadful typewriter

I’m with you in Rockland

The movie is not better than the poem, but it inspires us to reexamine the poem for our modern world. The times have changed; the times are still the same. And “Howl,” a poem written about the disillusionment of the Beat Generation, still feels relevant. If you’re in the mood for a movie that makes you stop and think, for a movie that is more art than narration, Howl is a perfect choice. How I wish I could decorate my wall with this tapestry. 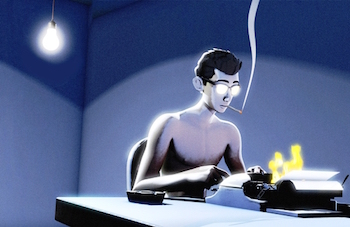 Animation by Eric Drooker and The Monk Studios