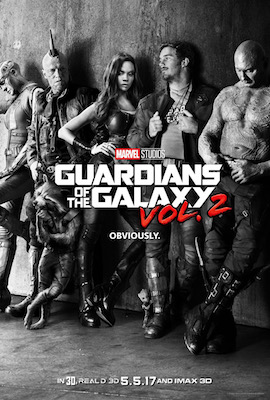 Peter Quill was an orphan. After his mother died on Earth, Ravagers, space pirates, abducted him and took him into space, to learn their ways and to assist them in their thefts. Twenty-some years later, he joined with Gamora, Drax, Rocket, and Groot to form the Guardians of the Galaxy. As the Guardians, they took on Ronan, the Kree terrorist, and defeated his plot to destroy Xandar. After this victory, these antiheroes, now heroes, stayed together to become hired guns. In Guardians of the Galaxy, Vol. 2, we meet them at one of their mercenary gigs, defending very expensive batteries from a creature who has more teeth than all the Jaws movies put together. For payment from this gig, they earned Gamora’s fugitive sister, Nebula, as their prisoner. There’s a big reward for Nebula for her role in Ronan’s attack on Xandar, and the Guardians intend to collect it.

James Gunn directed Vol. 2; he also wrote the screenplay. Though I enjoyed the story, I don’t believe it’s as well-written as the original movie. It has a simpler plot that doesn’t flow as smoothly as the more complicated Guardians of the Galaxy. That might sound like harsh criticism, but I considered the original screenplay one of the best screenplays of the last few years, so most screenplays are inferior to it. Inferior doesn’t mean bad. This is a fun and entertaining story, filled with witty dialogue, emotional drama, and spellbinding action. Henry Braham was the cinematographer. I enjoyed the visual elements of the movie. I think it’s marvelous the way they blended the motion-captured characters like Rocket and Baby Groot into the live action scenes. But I found some of the CGI too heavy-handed and unbelievable. That’s a common reaction I have to many CGI scenes. Hollywood loves their CGI, and it often adds to the movie, but filmmakers have yet to learn when too much of a good thing becomes a bad thing. In many scenes, especially in those scenes between Peter and Ego, I wished they had trimmed back on the CGI and work with practical effects instead. 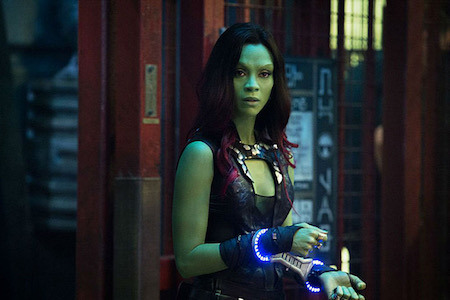 As for the cast, the familiar faces returned. Chris Pratt, Zoe Saldana, and Dave Bautista reprise their roles as Peter Quill, Gamora, and Drax. Rocket and Baby Groot were voiced by Bradley Cooper and Vin Diesel. Both Michael Rooker and Karen Gillan return as Yondu and Nebula, and both enjoyed expanded roles in Vol. 2. Since they were two of my favorite supporting characters from the original movie, I loved seeing that. Kurt Russell plays Ego, Peter’s long lost father, and Pom Klementieff plays his slave, Mantis. Regular readers of my reviews know that I like giving best actor awards. Since everyone did excellent jobs, its hard to choose that award for Vol. 2. They all deserve it. But I’m going to give it to Klementieff. Mantis is the most emotional character, and I love the way she portrayed those emotions. Sometimes subtle, sometimes overt, but always believable and memorable.

There’s a surprised cameo from a big star. At least a surprise for me. Perhaps by now, word has gotten out. I hope not. Seeing his familiar mug without expecting it was a small thrill. Since this is a MCU film, there is the Stan Lee cameo. When it happened, I groaned in displeasure, but others in the audience laughed in appreciation. I think many people like Stan Lee cameos; it’s like playing Where’s Waldo. Where’s Stan? When will he appear? What will he be doing? In Guardians of the Galaxy, his cameo was low key and natural, but in Guardians of the Galaxy, Vol. 2, it felt like an unnatural break from the story. Whether you love his cameos or, like me, loathe them, know that it’s there, and like the price of admission, not to be avoided.

Since the plot involves Peter Quill reuniting with his father, Ego, and with Gamora reuniting with her adopted sister, Nebula, family is an important theme in Vol. 2. The most basic definition of family involves blood relations, but we all have those people, unrelated by blood, who feels as close as siblings and parents—in some cases, closer. We use the term extended family to explain these connections. The thematic arc of the original Guardians of the Galaxy explained how these dissimilar beings became a team. The thematic arc of Vol. 2 shows how they became a family. In one moving scene between Yondu and Rocket, Yondu lays into Rocket. He insults him, calling him this, that, and the other thing, inciting Rocket’s ire, and then Yondu delivers the punchline that makes it all right. There were several such relationship-building scenes in the movie—between Peter and Gamora, between Gamora and Nebula, between Drax and Mantis. These scenes make it a more interesting and emotional movie than the original.

It’s also a funnier movie. Comic relief came from Baby Groot, and Pratt as Quill continued his sarcastic humor, but a lot of characters found their comic side. The original movie had a better plot and better action sequences, but the second movie is more emotional and humorous. Both are very enjoyable movies, and I would be hard put to name which is the superior movie. In my review of Guardians of the Galaxy, I called it my favorite MCU movie. I’ll say that Guardians of the Galaxy, Vol. 2 is my second favorite—but it’s a photo finish. I strongly recommend seeing it. 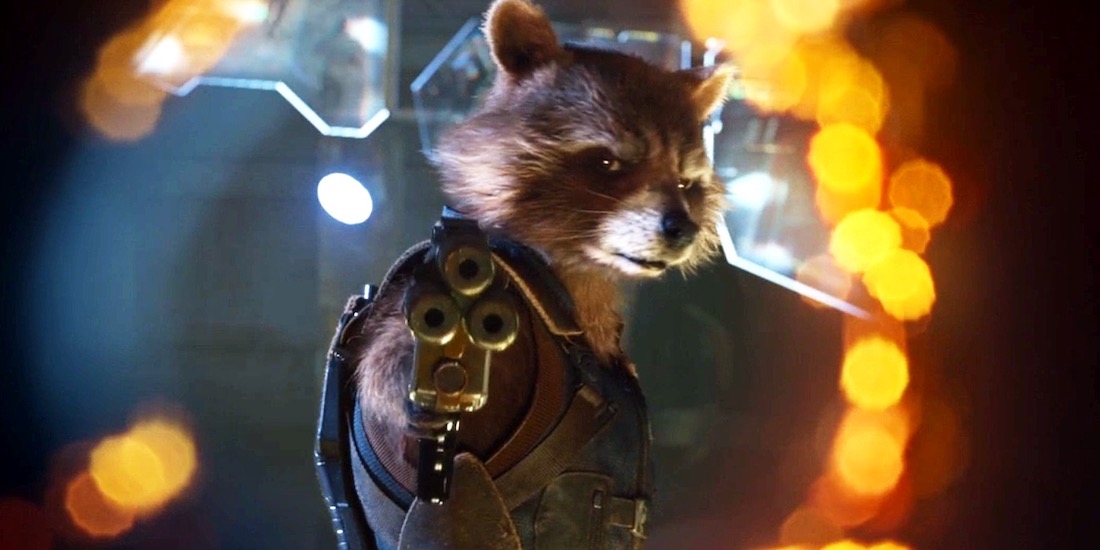