Movie Journal: Ghost in the Shell 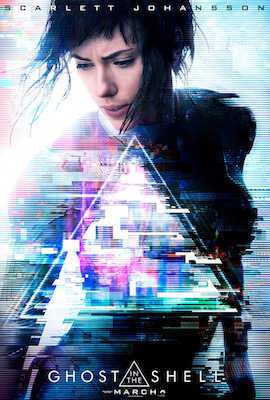 The trailer for Ghost in the Shell shows a scene where Major, the ghost in the title, jumped from a great height to launch an attack on the bad guys. That scene is about all I knew about Ghost in the Shell prior to seeing it. It’s not a lot to go on, I know, but I’m a strong believer that we must support movies—with ticket purchases—where the protagonists fall or jump from great height with no or little physical damage, nothing they can’t shake off. Because there are so few movies like that, right?

I guess I knew a few other things. I knew it starred Scarlett Johansson, who used her role as Black Widow in the Marvel Cinematic Universe to springboard her into becoming one of the biggest female action stars. I also knew that the movie was based on the manga of the same name by Masamune Shirow. I suspected that there was a computer game—because why wouldn’t there be?

But what I knew about the movie itself was the jump scene. I like going into a movie a blank slate. I like going in knowing little about the characters or the plot. I like going in having no expectations of whether I will like it or not. It was to satisfy this desire that I saw Ghost in the Shell. Because of the manga and the computer game, I expected it would have a strong following. So I was surprised when I walked into the auditorium and found that only a dozen people were in the audience. Not a good sign! I thought. It boded particularly bad, because the lobby had been packed. It was a day to watch movies, but few of those moviegoers came to see Ghost in the Shell.

Rupert Sanders, the director of Snow White and the Huntsman, directed Ghost in the Shell. Jamie Moss, William Wheeler, and Ehren Kruger wrote the screenplay. Jess Hall acted as cinematographer, but since much of the visuals from this film came from CGI and other visual effects, it’s hard to say what influence he had in the overall look of the film. Since almost every shot in the film required some form of computerized imaging, I feel the effects team deserves a shout out. Unfortunately, I know so little about how that process works that I have no idea of who to credit with it. I read the list of the effect team on IMDB, and it’s mind boggling how many people are involved, how much work was involved. Did it pay off? 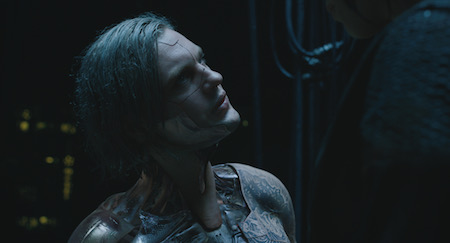 As the movie played, I took an immediate dislike to it. It had remarkable visuals, but they felt too overbearing. Every shot conveyed too much information. It felt like the crowded cityscape in Blade Runner (1982), only more crowded and busier.  Too many flashing lights. Too many holographic advertisements. I wanted to retreat from it.

The effects were stunning. I mean stunning in both a negative and a positive way. As I mentioned above, they stunned me. I often felt overpowered by them. They were too busy, and my eyes struggled to know where I should be looking. In photography, one goal of composition is to guide the eye to the photographic subject, but those creating the visuals for Ghost in the Shell often felt no such consideration. As the movie played, as I became more used to this style, I appreciated the positive aspect of stunning. The visuals were beautiful and convincing. They established a crowded, claustrophobic milieu for the action to play out. As every writer knows, setting is a character. And like any character, it interacts with other characters to supply motivation and conflict. The visuals helped to establish the setting, a fictitious city, an inhumane construction of humanity—a paradox that served the story and its themes well.

Scarlett Johansson plays Major, a robot with a human mind. Designed and trained for military operations, she works with a counter-terrorism force known as Section 9. Assigned to track down and battle a terrorist known as Kuze (Michael Pitt), Section 9 raids night clubs and warehouses, investigates murders, and chases Kuze’s associates. This is an science-fiction action movie set in a future where nearly every person has some form of machine enhancement, where everyone is a cyborg. It’s an intriguing premise, the best thing about the story. But because of the manga and computer games,  I fear the filmmakers were catering to a ready-made audience, of which I’m not a member, so I felt lost, especially during the first act, as characters were introduced without any clear understanding of the relationship between them. That alienated me at first, but as I began to understand those relationships, I felt better about the movie. The plot began as a simple hunt-and-kill plot, but during the second act, it turned into something more complex and intriguing. That makes the second act the movie’s strongest act. The third act was anticlimactic to the point of being stupid. I didn’t like the beginning, didn’t like the end, but I liked the middle. 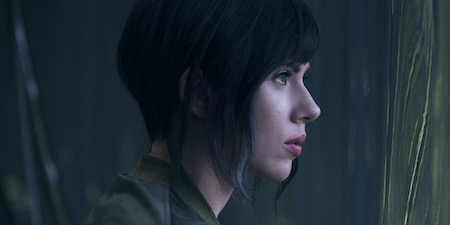 Because the middle dealt with the movie’s theme about the nature of identity in this technological world filled with cyborgs. There were other themes dealing with technology, with the fusion between corporations and government, and with he presumptions about terrorism and the terrorist’s motivations, but it was the quest for identity that interested me. In a world filled with cyborgs, Major is something unique. She’s a ghost, a human mind, locked into a robotic body, the shell. As such, she struggles with what that means, how that defines her. Isn’t there a real self locked up in that brain? Is her true self lost forever in that life that she can no longer remember? I loved the way the film introduced this theme. In an early scene, she looked at a robot she had just “killed,” and then she looked at her wounded arm. In the cut skin, she could see the robotics inside her. Her partner, Batou (Pilou Asbæk), understanding her look, told her that she’s not the same as the robot. True, but she understood that she also wasn’t the same as him or other humans.

Since there are elements to both like and dislike in Ghost in the Shell, any recommendation I have for it will be qualified. One test I use to determine the quality of a film is: Do I want to see it again? Though I’m sure I’ll watch it again when it comes available for home viewing, I feel no urge to see it again at the theater. It’s a good movie, entertaining and intriguing, but it’s not the best movie currently playing.