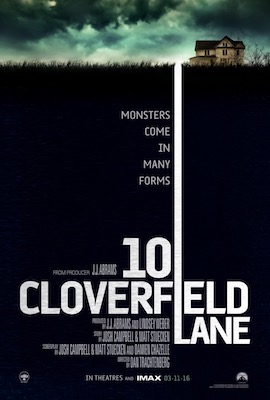 I never reviewed Cloverfield (2008) in the blog. When I watched it a few years ago, I found it an okay movie, worth seeing since it was available on one of my streaming services, but nothing I felt the desire to see again. I do not like the found-footage style. Though there had been some good movies made in the style—the original Blair Witch Project arguably being the best—most I’ve seen had been rotten. Bad acting. Bad writing. Bad production values all around. They are silly, because at some point, you would drop the camera and run for your life, but the people in found-footage films never do. Cloverfield was one of the more entertaining found-footage films. If I graded movies, the way some internet reviewers do, I would give it a C+. I’m glad I saw it, but I’m also glad I waited for home viewing to see it.

When I first saw the trailer for 10 Cloverfield Lane, I didn’t know it was a sequel to Cloverfield. Other than noticing the shared word in the title, I thought it was a stand-alone movie. It looked tense, suspenseful, and full of drama. It looked like a movie reminiscent of the suspenseful films of Alfred Hitchcock and Brian De Palma. Since the suspense looked both physical and psychological, I felt anticipation buzzing inside me. Must see! I thought. And then I learned that it was a sequel to Cloverfield, and my anticipation faded. I allowed my lukewarm opinion about Cloverfield to sour my excitement for its sequel.

I’ll watch it, I thought. But I’ll wait for home viewing.

Now that I’ve seen 10 Cloverfield Lane, I know that was a mistake. It was the movie the trailer promise—suspenseful and mysterious, violent and emotional. It’s that rare sequel that is much better than the original. It’s too early in his career to tell whether director Dan Trachtenberg will join the ranks of the best suspense directors, but in 10 Cloverfield Lane, he gave us a movie that keeps our hearts pounding. Is it as good as a Hitchcock or De Palma movie? No, that’s overstating it, but it is one of the best suspense movies I’ve seen produced in the last five years.

Following a traffic accident that knocked her out, Michelle awakes to find herself chained to a pipe and locked in a cell. She believes herself abducted. But her abductor, Howard, tells her that there had been an attack, and that the world she knew no longer existed. He tells her that they were in his bunker, where they will have to remain for a year or two. Though she doesn’t believe this, the third person in the bunker, Emmett confirms the attack. Despite this confirmation, she distrusts Howard and doubts his sanity. When she finds evidence of his nefarious history she plots an escape. That’s when she realizes there are real monsters to fear. 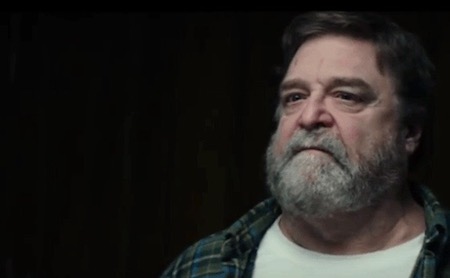 As Howard, John Goodman—not for the first time—proves his mettle as an actor. I’ve seen him play comedic characters and dramatic characters, and every time, his performance is flawless. We all know a Howard, that kook who lives on the fridge of society, who talks about doomsday as if it’s bound to happen today, and who advances every conspiracy theory put forth. In his performance of Howard, Goodman gives us what is both likable and frightening about this character. We can’t quite hate him, even though we understand Michelle’s distrust. He’s sincere and honest, but within him, we recognized instability. He’s a balance about to topple. I’ll give Goodman the best actor award for this movie, but I will go even further to say that his performance is the main reason to see 10 Cloverfield Lane.

Mary Elizabeth Winstead’s performance as Michelle is the second main reason. Not to keep you in suspense—that’s the movie’s job—John Gallagher, Jr. as Emmett is the third main reason. This is an actor’s movie, and the interplay of the characters is what made this movie tense and suspenseful. The filmmakers didn’t give the protagonist Michelle a lot of backstory, but what backstory they gave created an easily identifiable and sympathetic character. We recognized her plight and understand why she feels threatened. We worry about her fate. Worrying about the protagonist is an essential ingredient in suspense. Winstead’s performance locked me in and kept me locked in until the end. 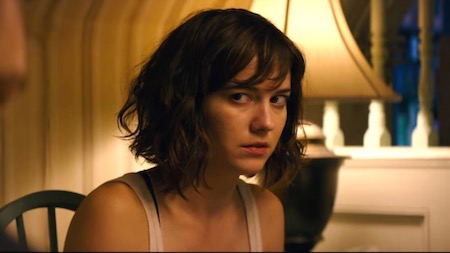 But how do I feel about that ending? For two acts, 10 Cloverfield Lane is about three people locked in a bunker, where one of them is deranged, possibly homicidal. But when the third act hits, it’s about a fight against monsters. Howard ceased to be the main antagonist, and the Cloverfield monster takes that role. The suspense thriller becomes a horror movie. The shift was foreshadowed. It had been clear that, as unbalanced and paranoid Howard was, he was right about real dangers existing outside the bunker. And since I knew, before watching it, that it was a sequel of Cloverfield, I always expected the giant monster to show up. The transition flowed smoother than I expected. But the fact remains that for two reels, it was one type of movie, and for the third reel, it shifted into another type of movie. This is 10 Cloverfield Lane’s biggest weakness, the thing I hated. I would’ve preferred it if they cut the whole monster madness element and focused on the conflict inside the bunker.

That conflict inside the bunker was its most compelling conflict. Unfortunately, it ended in a rushed, sloppy climax in order to introduce the Cloverfield monster. It was the conflict between Howard and Michelle that intrigued me when I saw the trailer, and it was this conflict that kept me enthralled as I watched 10 Cloverfield Lane. 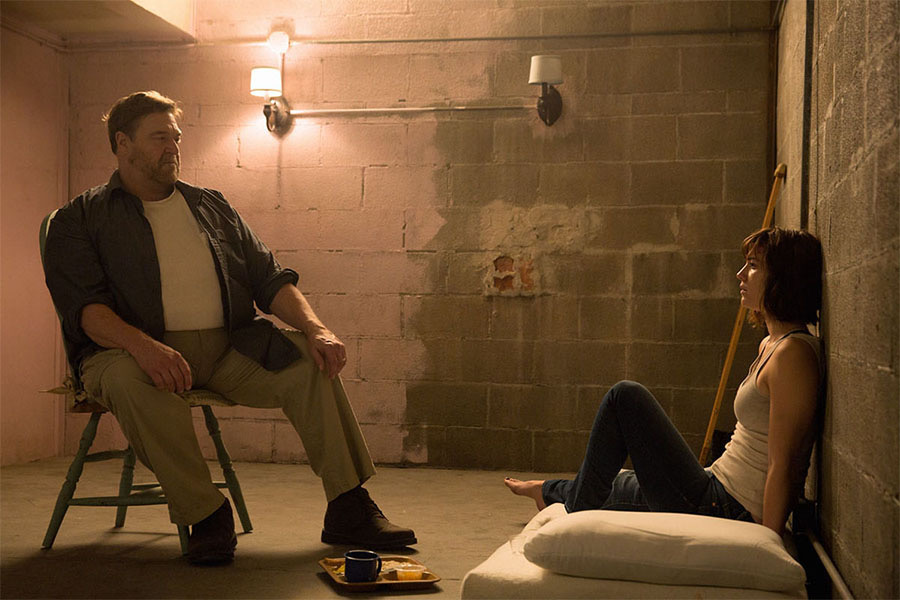