Memories of My Melancholy Whores by Gabriel García Márquez 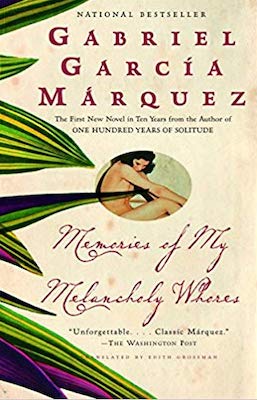 Memories of My Melancholy Whores begins with its protagonist and narrator declaring the objectionable goal of wanting to have sex with a teenaged virgin. It’s the gift he wants to give himself for his ninetieth birthday. He contacted the madame at the local brothel, who finds a fourteen-year-old girl to fulfill his needs. Since even in the fictional world presented by Gabriel García Márquez, such arrangements can cause trouble with the authorities, he agreed to pay a premium for the service. He dressed in an elegant suit, drew the needed funds from its hiding place, and headed out for his night of passion.

If this beginning makes you cringe, I don’t blame you. It made me cringe too, but beyond the cringe, there’s a beautiful lyrical novel worth reading. We don’t expect fictional characters to behave well, or share our sense of right and wrong, or live lives devoid of blame. Indeed, how boring would that be to read! Good fiction comes when characters misbehave. From this set-up, García Márquez explores, at least for this protagonist, what it means to grow old and alone.

Born on March 6, 1927, Gabriel García Márquez is a Columbian writer. He began his career as a journalist, but soon he wrote nonfiction books. He eventually turned to novels, short stories, and screenplays. He burst into the international literary scene with One Hundred Years of Solitude (1967). His other works include Chronicle of a Death Foretold (1981), Love in the Time of Cholera (1985) and The General in His Labyrinth (1989). In 1982, he won the Nobel Prize for Literature. Though some of his screenplays were produced posthumously, Memories of My Melancholy Whores (2004) was the last work in prose he wrote. He died on April 17, 2014.

The year I turned ninety, I wanted to give myself the gift of a night of wild love with an adolescent virgin. I thought of Rosa Cabarcas, the owner of the illicit house who would inform her good clients when she had a new girl available. I never succumbed to that or to any of her many other lewd temptations, but she did not believe in the purity of my principles. Morality, too, is a question of time, she would say with a malevolent smile, you’ll see.

In the early 1980s, probably fed by the Nobel victory, One Hundred Years of Solitude became popular in the United States. That’s when I read it. Since it was many years ago, and since I had read tons of novels since reading it, I don’t remember as much about it as I wish. But I do remember one remarkable passage where he describes blood pouring from a fatal wound. The blood behaved as a sentient being. That was my introduction to magical realism, a predominately Latin American literary style. I don’t think García Márquez was its progenitor of this style, but he was a master of it, and with One Hundred Years of Solitude, he gave it an international reach.

In the literary community, we tend to classify novels as plot-driven or character-driven, but Memories of My Melancholy Whores is driven by theme. The theme is aging. Though García Márquez frames the novel with the narrator’s desire for the teenaged virgin, it’s really a vehicle for him to contemplate his life, his ninety years. It’s a life of solitude, perhaps loneliness, spent writing pieces for the local newspaper, studying literature, and listening to beautiful music. He lives in the same house where he was born, and we sense–since he’s ninety–that one day he’ll die there. Like him, the house had seen better years. It’s showing its age. Every time it rains, he discovers new leaks in the roof. Despite the title, it’s not the whores who are melancholy in this novel.

I live in a colonial house, on the sunny side of San Nicolás Park, where I have spent all the days of my life without wife or fortune, where my parents lived and died, and where I have proposed to die alone, in the same bed in which I was born and on a day that I hope will be distant and painless. My father bought the house at public auction at the end of the nineteenth century, rented the ground floor for luxury shops to a consortium of Italians, and reserved for himself the second floor, where he would live in happiness with one of their daughters, Florina de Dios Cargamantos, a notable interpreter of Mozart, a multilingual Garibaldian, and the most beautiful and talented woman who ever lived in the city: my mother.

It’s the theme of aging that makes Memories of My Melancholy Whores worth reading. I have said before in this blog that every novel, every work of fiction, is a collaboration between the writer and the reader. There is what the writer puts into the work; there is what the reader draws from it. No doubt they are related, but they are rarely, if ever identical. In these reviews, I write about my experiences in reading literature. Maybe your experiences will be different. At sixty, I’m three decades away from my ninetieth year. Since I’ve had two heart attacks, it seems doubtful that I’ll reach ninety. So I find myself, these days, contemplating my own life.

Like the narrator, I’m a man who had forsaken romantic love for scholarly and creative pursuits. Like him, I surround myself with books. My library is my prized possession. Like him, I spend my hours putting words to paper. And like him, I look back over my life, over the choices I’ve made, and I wonder what if. I don’t regret my life–I can’t imagine living any other way than how I do–but one pays the price for solitude. Is the price worth paying? Does this contemplation sound like a melancholy mood? I suppose it is.

Melancholy is often used as a synonym for sad, but I debate the accuracy of that. Sadness originates in the heart; melancholy, in the mind. Sadness is an emotion; melancholy is a way of thinking. Sadness is the opposite of happiness, but being melancholy doesn’t preclude feeling happy. Is that a paradox?

Fiction can deal in paradox like no other medium. Memories of My Melancholy Whores is a paradoxical novel. The narrator contemplates his life, despairs over his loneliness, even discovers regrets, but given a second chance to live that life, I believe he would make the same decisions. We live the life we are suited to live, and he’s suited to a life spent in writing, reading, and loving music.

Memories of My Melancholy Whores is a short novel. At 128 pages, it’s the perfect size for a weekend read. I love Gabriel García Márquez’s ability to give us lyrical descriptions that also serves as a psychological profile as the narrator. I’m not sure it’s the best introduction to his work, but since it explores the theme of aging and involves contemplating one’s life, it seems fitting that it was his final published novel.