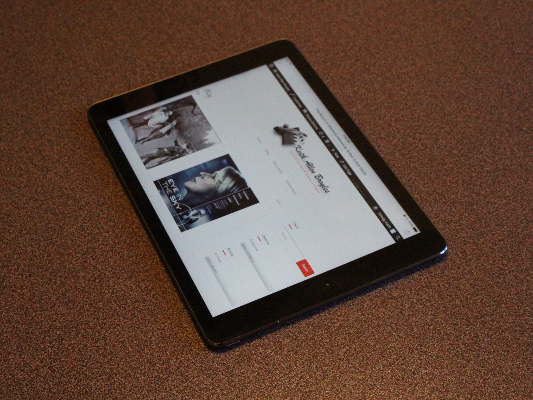 When I first heard that Apple was developing a tablet device, I rolled my eyes and asked, “Who’s going to want that?”

But the first time I saw the iPad, I answered my own rhetorical question. “Me! That’s who! I want one!”

I don’t remember whether it was the week of its release or a couple weeks later, but I do remember it wasn’t long after the introduction when I purchased my first iPad. I’m almost never the first to adopt new technologies, but I was the first of my circle to acquire an iPad. Though most early adopters saw it as a consumption device, a way to listen to music, browse the Internet, watch YouTube videos, and the likes, I always knew I wanted it as a productivity device. That meant: I wanted it for writing on the go.

When I write, I prefer to be at home, sitting at my desk, typing on a full-size keyboard, and looking at a large display. That is ideal. But since I’m constantly writing and constantly wanting to write, I require a way to write on the go. This didn’t justify buying a laptop, which I didn’t want to haul around. Instead I carried pads of paper—legal pads—and my journal. When I saw the iPad, its size convinced me it was the device that would be light enough to carry but versatile enough to write, read, send emails, browse the Internet, and perform a dozen odd activities.

Since writing on the go was the number one job I wanted from my iPad, during the first month I owned it, I gave myself an iPad challenge. Knowing typing on the small keyboard, that claimed half the display, would be challenging, I set aside an hour a day to train my hands. For that hour, even if I was at home with my desktop handy, I wrote on the iPad. In this way, I learned to type on the iPad. I’m so glad I did that challenge. Though my typing on the iPad isn’t as fast or precise as on my desktop, it is skilled enough to keep me productive. And that’s the point.

It is now time for new iPad challenges.

I find myself tempted to upgrade to iPad Pro, but I have a hold on device purchases this year. No new devices in 2016! I wrote that in a piece of paper and burned it in my fireplace, hence committing to it in reality. I mean it’s like a pact with the gods now. I wasn’t interested in the first iPad Pro, because it looked too big and cumbersome for my needs, but now Apple had released the 9.7″ version, and I find myself tempted. What a cleaver but evil ploy adding the word pro to the name. No doubt it means I could be even more productive on the go.

Or does it? Am I limited in what I can do on my current iPad Air? Can I, for instance, write a short story using only my iPad? Or edit photographs only on the iPad, without the aid of my desktop?

Asking such questions, I identified four activities to test: fiction writing, blog writing, photography, and drawing. That is a list of how I spend much of my time. During the next few months, for each of those activities, I’m going challenge myself to work one project from idea to completion. I’ll report on my successes or failures, on my joys and frustrations, on my compromises and discoveries in a series of blog posts. In fact, writing and publishing those blog posts will be my blog writing challenge. I will tell you what I learn, what apps and accessories I found useful, and what work arounds I needed to develop.

In the advertisement for the iPad Pro, Apple tells us they believe the iPad is the direction of personal computing is going. In other words, they image a world where individuals need only an iPad or one of its rivals in order to function. Though I can also envision such a world, I know for myself we are a long ways from that achievement. With these iPad challenges, I mean to discover just how far.