In Search of the Trojan War by Michael Wood 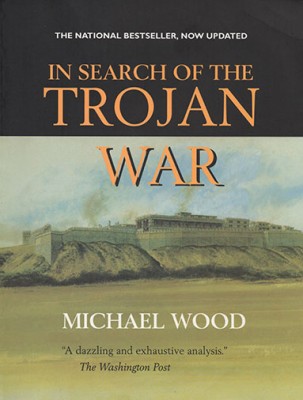 In 1274 BCE, the Egyptian and Hittite Empires met for battle at Kadesh. Less than a hundred years later, around 1190, unknown invaders captured and destroyed the Hittite capital of Hattusa. Between these two events, legend tells us, a Trojan prince named Paris visited the Mycenaean Greek city of Sparta and ran off with its queen, Helen. Whether elopement or abduction, seduction or rape, the classic sources do not agree. But they do agree on what happened next. Helen’s husband, Menelaus, and his brother, Agamemnon, king of Mycenae, formed a coalition of Greek kingdoms. They sailed to Troy and besieged the city. After ten years of war, they tricked the Trojans by building a giant wooden horse and hiding soldiers inside. They boarded their ships and sailed away. But they returned that night, after the soldiers hidden in the Trojan Horse had killed the guards and opened the gate. The Mycenaeans razed the city, killed the men of the royal family, and took the women as slaves.

We know this legend through several Greek sources, but mostly through two epic poems, The Iliad and The Odyssey, attributed to an 8th Century BCE bard named Homer. About two hundred years after Homer died, his poems were still recited in the oral tradition by the Homeridae, when a tyrant of Athens, Pisistratus, commissioned them to be recorded in writing–hence beginning European literature. And we have enjoyed these books every since.

But did the Trojan War really happen? Did a city call Troy ever existed? These are the question the British historian Michael Wood sought to answer in In Search of the Trojan War. He began his search doubting the legend, but as he dug deeper into the knowledge surrounding the Trojans and the Mycenaeans, he became convinced that the legend was based on an historical war.

Michael Wood is an historian who worked with BBC to create historical documentaries for public consumption. Tall, attractive, and stylish, he combine the good looks and charisma of a television personality with the scholarly disposition of a professor to explore history in television shows that were both educational and entertaining. He began this career with In Search of the Dark Ages (1979-1981) and followed it up with In Search of the Trojan War (1985), In the Footsteps of Alexander the Great (1997), In Search of Myths and Heroes (2005), and similar shows. In Search of the Trojan War is the book tie-in to the BBC series by the same name. Though my focus of this review is the book, please know that they compliment each other, so what I say also applies to the television series.

Beyond the trees you come to the site itself, a hill called Hisarlik. You see immediately that you are on the edge of the plateau. Northwards and westwards the land falls away quite sharply to the vivid green of the plain, so the city stood on an eminence, if not beetling, as Homer has it, then at least raised above the plain. To the south-west, beyond the Sigeum ridge which marks the coast, is the distinctive humped back of the little island of Tenedos, where Homer says the Greeks had a base during the ten years of the siege. On the north-western horizon–if the weather is fine and the sky is clear (it is not often so)–you can see the Aegean Sea and, reaching into it, what seems a long promontory. This is the island of Imbros, and peeping over the top of Imbros, (if the light is exceptionally good) is a vision of glory: the great mountain called Fengari on Samothrace, about 50 miles away.

After 9/11 I became fascinated with history; I became fascinated with beginnings. That fascination led me to study the Trojan War. For the first time in legend–if not in history–Europe and Asia fought a war. And we’ve been clashing every since. But what does the Trojan War has to do with our current wars in the Middle East? Nothing. And everything. It is as if the Dardanelles, the waterway that separates Europe and Asian, East and West, is the fissure between tectonic plates. They collide together, creating friction, causing earthquake and volcanic eruptions, and the human equivalent of these disasters is war. The Mycenaean Greeks knew it when they razed Troy. Xerxes, the Persian emperor, knew it when he invaded Greece. Alexander knew it when he conquered the Persian Empire. The Romans knew it when they founded Constantinople on the Sea of Marmara. Mehmet knew it when he captured Constantinople and renamed it Istanbul. During World War I, the British and Ottomans knew it as they fought at Gallipoli. And we know it today with our wars in Iraq and Afghanistan, with Iranian nuclear ambitions, with Arab Spring, with the Syrian Civil War, and with the war against ISIS.

Will there ever be an end to these wars? Who knows? But we can look at the beginning, and the beginning of East-West conflict, at least to me, is the Trojan War.

Wood began his investigation with archaeological findings. If there was no city named Troy, then there was never a Trojan War. But in the late 19th Century CE, the German adventuress, Heinrich Schliemann–the father of archaeology–excavated a Bronze Age citadel exactly where Homer said Troy stood. He unearth a grave circle in Mycenae and a megaron or throne room at Tiryns, with frescos on the walls showing us the faces of Mycenaean Greeks. These findings proved that there was a city where Troy is reputed to have stood, and they prove that Mycenae was a powerful city capable of launching an overseas expedition. Other archaeologists followed in Schliemann’s steps–Wilhelm Dörpfeld and Carl Blegen–each unearthing more of Troy. Meantime, Sir Arthur Evans excavated Knossos, the Minoan palace and unearthed the Linear B tablets, from which we had learned so much about Mycenaean Greece.

After describing these excavations and their significance to the search for the Trojan War, Wood turned his attention to Homer. Who was this poet whose work is still read and studied? The short answer: No one knows! He lived during the Greek Dark Ages, that period between the collapse of the Mycenaeans but before the rise of the Classical Greeks. This was an illiterate time, a time of oral tradition. Homer would’ve adopted songs and poems he heard, and recast them in his style to his own stories. Wood studied The Iliad closely, looking for clues in the text that would prove Homer knew how Troy had looked at the time of the war, and he found it. Wood also examines Hittite documents, and in them, he finds evidence of the war in treaties and letters. In this manner–academic, studious, but don’t worry, Wood does the heavy lifting for us–he builds the case for the historical city that we now call Troy and for a war that saw its destruction.

Wood’s writing style is not dry, but I warn you, the subject matter often is dry. I confess to a wandering mind, as Wood describes pottery shards with such terms as MH II or Grey Minyan. Anyone who knows anything about archaeology knows the importance of potter shards. From such fragments archaeologists determine the dates the city stood and who lived there and who they were trading with. Important information, no doubt, but I leave this study to archaeologists–and they’re welcome to it! But such passages do not define this book. Wood has a knack for describing landscapes and ruins that allowed me to visualize what he saw. And he supplemented the descriptions with pictures, maps, drawings, and other illustrations. In short, he collected literary, scientific, and historical information and presented it to us in a book intended for the layman reader.

Mycenae was built for war. In its origin, it must have been what the Turks call a dervendji–that is, a castle built at a junction of mountain passes for the purpose of levying tribute or tax on all traffic that passes through; a stronghold of robber barons. It stands on a craggy hill underneath two triangular peaks, its back to the mountains, ‘folded up into a menacing crouch’, as Henry Miller put it. In front, southwards, the rich plain of Argos opens to the sea. To the north are mountains beyond which lie the plain of Corinth and Sicyon, areas which Homer says were in the kingdom of Agamemnon. Among these mountains stands Mycenae, massively walled, armed to the teeth. Tucked away up in the north-western corner of the plain, it is not near the sea and does not have good arable land within its immediate grasp. It is hard to see how such a place could thrive, or why it needed such great walls, until you walk around it and notice that it stands at the meeting-place of an ancient system of tracks leading north and south, linking the Argive and Corinthian plains, and the smaller plain of Berbati and the Kontoporeia pass. If the life of Mycenae began as a local chief’s stronghold, she had risen to great wealth by the sixteenth century BC when Schliemann’s shaft graves were constructed. From then on the place must have depended for its greatness upon industry and commerce with a wider world.

The test of a nonfiction book is the information it conveys. Did I learn what I wanted to learn? Did I learn what Wood had to teach me? Does he convey this information with authority, meaning, did he do the required work in order to write this book? Or more simply: Does he know what he’s talking about? The answer to these questions is yes. Before I watched his BBC series and read his book, my vision of the Trojan War was ill-formed and misleading, based more on the myth and popular culture interpretation of that mythology. I watched Brad Pitt’s disastrous movie, Troy (2004), and the even worst TV series, Helen of Troy (2003), starring Sienna Guillory as Helen, and I knew these films missed the point. I didn’t know a lot about the Trojan War, but I knew more than these movies. Michael Wood doesn’t miss the point. He took the legend out of the realm of myth and popular culture and grounded it in the world of stone and bronze and, yes, pottery shards.

If you are interested in history, especially ancient history, then Michael Wood In Search of the Trojan War is a good book to read, and its accompany BBC television series is also a great choice. I fear the book, like most nonfiction history books, is pricy. Amazon sells it for $35. But I imagine your local library has a copy or can acquire it through interlibrary loan. I was hoping Netflix had the series, but alas they do not. (Though they do offer other Michael Wood projects, like In the Footsteps of Alexander the Great.) Amazon sells the video series for $25. Since this was a popular series in the 1980s, it could be your library also has a copy of it. Whether you buy it or borrow it, In Search of the Trojan War is a good read for those interested in history.