Heart Break, Beauty, and The Sound of Silence

Home / Heart Break, Beauty, and The Sound of Silence 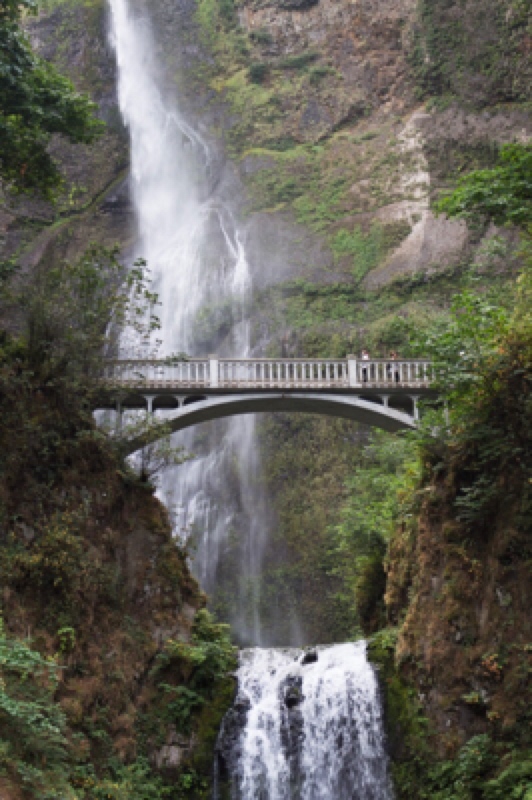 If I close my eyes, I thought, I’ll die.

I forced my eyes to stay open and I stared at the monitor. It was a beautiful image. I couldn’t read or understand it–that required a medical degree–but I knew it showed my heart, and I could see that it still beat. My left hand gripped my iPhone, my contact to the world. The doctors worked on my right wrist. I knew the plan was to run the device up my arm to my heart, inflate a small balloon to open the artery, and to install a stent to keep the artery open.

“You might die during the procedure,” the doctor had told me. “Without it, you will die. So what do we think we should do?”

“Let’s do the thing where I probably live,” I answered, “rather than definitely die.”

I wasn’t afraid to die. The panic I felt was the realization that this was happening now, as soon as they could wheel me into the theater, and not some distant time in the future–three days from now, tomorrow morning, or even in a couple hours. I wasn’t afraid to die. What fear I felt was for those who would survive my death, my family and friends, those whom I love, those who love me, most have yet to learn I was having a heart attack. I didn’t want them to receive that phone call: Keith had a heart attack. He died. There has been too much sudden death in my family; I felt determined not to be its next victim. I wasn’t afraid to die, but I was determined to live. I wasn’t done with life yet. More importantly, life wasn’t done with me yet.

I stayed calmed. I gripped my iPhone. I watched the monitor. I survived.

Now that I’m more than a month past this crisis, I don’t think of it as a heart attack as much as a heartbreak. My heart broke, literally, but it also broke figuratively. My heart betrayed me! I had always trusted my heart. I had always thought I was going to be the exception to the heart disease that plagues my family. But my heart let me down. It’s not a disappointment; it’s a heartbreak. In the weeks since, I’ve been working on learning how to trust my heart again. Part of that is physical: Can I climb these stairs? This hill? Can I walk a mile in hot sun? Will eating a cheese burger kill me? Can I lift this box? How do these actions feel? So yes, learning to trust my heart is a physical test–a series of them–but along with the physical, it is an emotional challenge. If your lover cheated on you, you’ll need to learn how to trust her again. And so my heart!

So is it any surprised that less than a week after my heart attack, I took a vision quest? A friend of mine had to go to Walla Walla for career reasons. I chose to tag along. Taking turns driving, we drove through the Columbia River Gorge, along Interstate 84. (As I write this, a wild fire is now burning over the same landscape and the highway is closed. How sad! Stupid fireworks!) Since he had to get to work, we didn’t make any tourist stops, except for a brief stop at Multnomah Falls to stretch our legs and empty our bladders. I took a couple pictures of the falls. We reached Walla Walla around noon, ate lunch, and after lunch, as Daniel worked, his fifteen-year-old son–who also came on the trip–and I wandered downtown. The temperature was 104. I worried about my heart; I worried about the stress. In truth, I never do well in hot weather even before my heart attack. I know summer is many people’s favorite season, but heat makes it my least favorite. Oh! Yes, I love how beautiful everything looks in bright sun, and I love being able to wear lighter clothing–to leave the winter coat at home–but the heat, oh that heat! Still I loved the walk. Walla Walla has a beautiful downtown with buildings from several historical periods. And the wine sellers! We walked down one street where the cellars were lined one after the other.

“I think you need to be twenty-one to walk down this sidewalk,” I told Cecario. 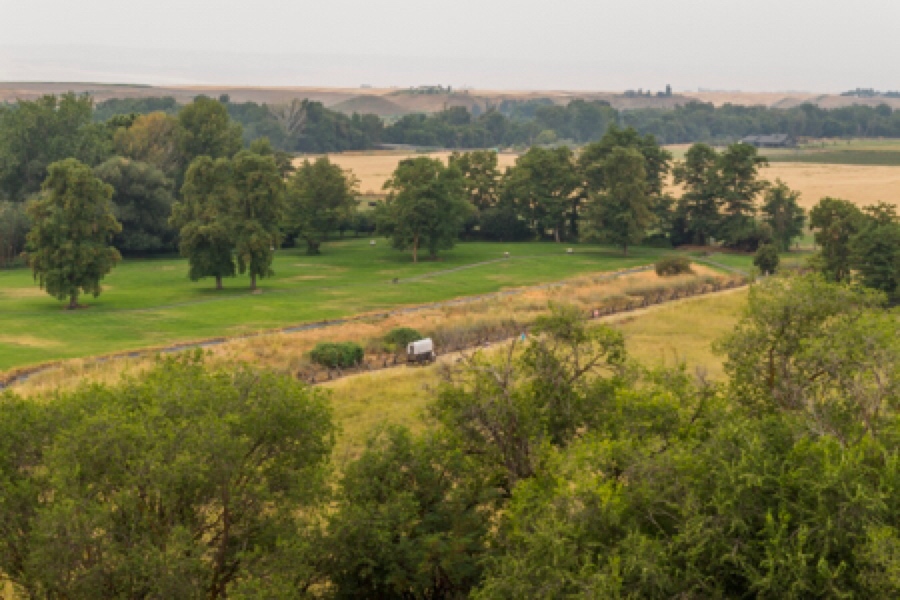 The next day, as Daniel worked, Cecario and I visited Whitman Mission National Historical Site. Here a tragedy happened. Native Americans, the Cayuse, died by the hundreds from diseases brought by white settlers. In retribution to this, a band of Cayuse massacred the missionaries, Marcus and Narcissa Whitman and eleven other persons. We visited the massed grave of those who had died during the massacre and the unmarked graves of the dead Cayuse. We climbed a hill to an obelisk that was erected in remembrance. Since the hill was steeper and higher than I had expected, I again worried about my heart. Will it survive this? Is this too much? Too soon? But I felt determined to reach the top of the hill. A Broyles is nothing but stubborn. At the top the hill, I set up my tripod and photographed the land below, where the mission buildings had stood. I explained to Cecario what I knew about the events that happened here, about the lost of Cayuse life, and about the slaughter that began a war.

“When two cultures meet,” I said, “there is always conflict.”

“We do not set aside such places to remember happy events,” I said. “We set them aside to remember the tragic.”

“Do you suppose it’s haunted?”

“I don’t believe in ghosts,” I answered. “But yeah, if they do exist, there’s likely some here.”

I called this trip a vision quest, but I admit I’m abusing the term. I didn’t think of it as a vision quest until after I returned home. In truth, it was a week or so after the trip that I began to realize it was a vision quest. I had returned to work and resumed my normal schedule. Returning to work! Can I still do my job? Another one of those physical tests. It was at work, during a quiet moment during my shift, when I realized the Walla Walla trip was a like a vision quest. I undertook it not so much to test myself physically but as part of that process of learning to trust my heart. Readers who are mystical will think of this as a spiritual journey, but for me it’s more existential. Having a heart attack forces hard questions. Who am I? What is my life for?

Perhaps my birth certificate answers the first question best. I’m the fifth child of Fred Broyles, Jr. and Donna Doering. Born on July 4, 1958 in Spokane, Washington. But what is my life for? The birth certificate will never answer that question. The answer has to come from inside me. Dare such a complex question have a simple, one-word reply? If yes, then that word is

All my life I had searched for beauty. I had strived to understand it and appreciate it. I had strived to create it and to explain it. Beauty comes to us in many forms. Nature gives us beauty in the animal kingdom, in the landscapes and seascapes that surround us, and even in the weather that both favors and abuse us. The human body is beautiful, both male and female–the flow of the hair, the softness of the skin, and the sinewy shape of muscles. And art is beautiful. Music and literature, too. It is in the last, literature, where I most often search for beauty, and where I spend most of my energy to create it.

In a very real way, this blog had been an exploration of literary beauty, because one way to appreciate literature is to write about it, to analyze it, to share opinions and thoughts about it, to tell you what I liked and disliked about this novel, that movie, or this television series, and to offer a recommendation about whether it’s worth your time and money. Though when I began the blog, I wrote only about novels and other books, I soon added movies and television series to the mix, because as classical literature included the theater, contemporary literature includes the motion picture. Others who offer reviews on the internet do so with YouTube videos, but I choose to write my reviews, because whenever possible, I will vote for the written word. I’m a writer, not a videographer. But there’s another reason why I prefer to write my reviews. Since my first post, I have considered these blog postings to be that part of my personal journal that I’m willing to make public.

Which brings me to “The Sound of Silence.”

Years ago, my brother Bruce, who also serves as my webmaster, asked me, “Why don’t you review music?”

“Because I don’t have the vocabulary for it,” I answered. I’ve never studied music–the chief regret of my life–and I’ve no talent for it. In my own singing, I’m tone deaf. But music has always been important to me. One doesn’t have to study music to appreciate it. And one doesn’t have to know the technical terms to recognize a song as beautiful.

In the time since my heart attack, I’ve became fascinated with “The Sound of Silence,” not with the Simon and Garfunkel’s original–a classic–but with a cover performed by the heavy metal band Disturbed. Heavy metal isn’t my preferred musical taste, but beauty knows no genre, and Disturbed’s version of “The Sound of Silence” is haunting. Gone are the resigned pathos of the orginal and replacing them is anger and despair, delivered by David Draiman’s passionate vocals. Drummer Mike Wengren gives us the well-timed heartbeat. Since it’s a mystery to me, I can’t explain why this song touches me so much, but whenever I hear it, I feel my eyes water. I stop what I’m doing and listen. It gives me both strength and courage.

I’ll close this blog with a video of Disturbed performing “The Sound of Silence” live. It’s not as refined as the studio version that’s in my music library, but it shares the same passion, and it’s always fun to listen to music performed live.

Would I really have died if I had closed my eyes during the procedure? Probably not. But one day, I will close my eyes and die. Before my heart attack, I never believed in that day, but now I know I’m closer to it than I am to my birth. That day when I will close my eyes for the last time doesn’t seem that important to me. It is the days between now and then that count.