Game of Thrones: Birth of the Dragon 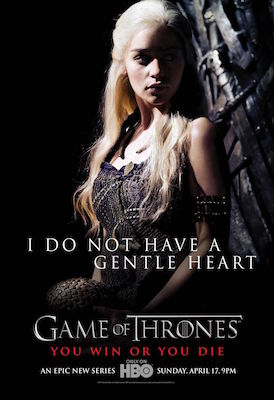 One strength of a television series like Game of Thrones is its ability to explore character. Characters have several episodes, several seasons, to develop and change. We call this transformation character arc. When I binge watch a television series, it tends to be the plot that keeps me watching, one episode after the next. But when a show stays with me, and I keep revisiting it, keep rewatching it, keep thinking about what happened, keep asking questions about the events and characters–that’s the characters working inside me. Plots are exciting, but character arcs are thought-provoking. Season 1 of HBO’s hit series Game of Thrones gives us several intriguing character arcs, but the most dynamic and dramatic belongs to Daenerys Targaryen.

Game of Thrones is an HBO series based on George R. R. Martin’s fantasy series, A Song of Ice and Fire. So far there are five novels in this series, with a sixth due out soon. Since I had read the first novel, A Game of Thrones, I know that the Season 1 is faithful to its plot, characters, and themes. What I write about Daenerys’ character arc in the series, also applies to the novel.

I know most viewers have moved beyond Season 1; Season 6 had just played on HBO. But I’m still digesting Season 1. I want to read Martin’s novels before watching the related shows, and since the seasons tend to correspond to the books–at least the first five season–it’ll take me a while–years, I suspect–to catch up with the rest of the world. Since Martin is still alive and writing, and since HBO is still planning new seasons, there’s a good chance I’ll never catch up. I hope you are okay with that, because I am. We read books, watch movies, and follow television shows for multiple reasons. Two important reasons are entertainment and critique. Though I seek both, I tend to spend more time in analyzing and critiquing a work than it takes to enjoy its entertainment value.

Warning: There is no way to write about a character’s arc without divulging plot events. One advantage about writing about Season 1 is that I can assume that any reader interested in this article is familiar with the story and plot.

In the Shadow of the Dragon 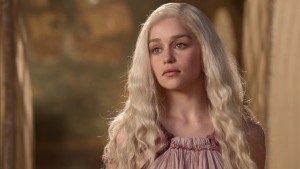 Daenerys Targaryen, played by Emilia Clark, began her journey as a docile, submissive teenaged girl. She lived in awe and fear of her brother, Viserys, who thinks of himself, especially when angry, as the Dragon. They were the last of the Targaryens, the surviving children of King Aerys II, the Mad King. Since he’s the last male in the line, Viserys believed he’s the rightful king of the Seven Kingdoms and King Robert Baratheon is an usurper. Motivated to reclaim his kingdom, he conspired with Illyrio Mopatis, a powerful merchant in the city of Pentos, to marry Daenerys to Khal Drogo in exchange for an army. Daenerys, fearful of her brother, and raised in his world view, submitted to this plan.

Martin’s theme in both the novels and this television series is power. How is power won. How is it used and abused. How is it lost. For Daenerys this translated into a quest of personal power, a path from dependence to independence. Before she gains political power, she must first become her own master. But at the beginning of the series, she’s dependent on Illyrio’s generosity and her brother’s good will. As her older brother, he treated her like a child. Worst! He treated her like his property.

The filmmakers illustrated this in Daenerys’ first scene. We meet her looking wistfully outside a window. (I found myself thinking about Rapunzel trapped in the tower.) When Viserys joined her, he brought a gift from Illyrio, a dress for her to wear while meeting Khal Drogo. As they talked about the plan for her to marry Drogo to gain his army, he pulled off her gown and fondled her breast. Not quite incestuous desire. It comes across more like a man examining the teeth of a horse he owes, a man examining his livestock. Daenerys stands there, submissive, because she was used to it. As a viewer, I understood that this wasn’t the first time Viserys had taken this liberty, and I also knew it wouldn’t be the last time.

This was beautiful and effective visual storytelling. I usually don’t write about the nude scenes in movies and television shows, because many of them are gratuitous, and even those that aren’t can be easily skipped without much effect. But this scene was not gratuitous nor can we skip it. Watching it, we understand who Viserys is, who Daenerys is, and we also understand the abusive relationship between them. We sympathize with Daenerys and hate Viserys. We know for her to be happy, she needed to break the dependence he has on her.

We go home with an army. With Khal Drogo’s army. I would let his whole tribe fuck you–all forty thousand men–and their horses too if that’s what it took. 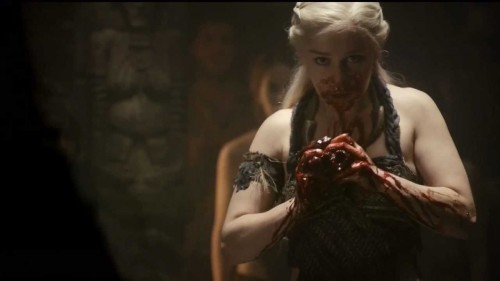 Among her bridal gifts, Illyrio gave her three dragon eggs. About the size and shape of a football, they were scaling and hard. Time had petrified them, he told her, but they are still beautiful. And expensive. Later in the season, we learn that if sold they would raise the money for an army and ships to carry it across the Narrow Sea to Westeros. Or allow her to live as one of the richest women in Pentos. But Daenerys had no intentions of selling them. They become both a symbol and an instrument of her growing independence.

That independence had to wait, because in marrying Khal Drogo, she passed from one dominate male to another. Part of her transformation, its first phrase, was sexual. For Drogo, sex involved satisfying his own desires without concerns of hers. In one sex scene, Daenerys bent over the bed, clearly dissatisfied if not disgusted, as Drogo entered her from behind. Her eyes stared across the room, at the dragon eggs in their wooden box. Realizing something was wrong with their intimacy,  and blaming herself, she asked a slave trained in pleasure to teach her. When the slave, Doreah, instructed Daenerys to take control of the lovemaking, Daenerys said that wasn’t the Dothraki way. “If he wanted the Dothraki way,” Doreah asked, “why did he marry you?”

One technique filmmakers have for showing character change is mirrored scenes. The sex scene above is mirrored with a post-instruction scene, as Daenerys, following Doreah’s advice, took control of the lovemaking. Finding pleasure and confidence in her sex life allowed her to feel more confidence in her role as Drogo’s wife, as Khaleesi, as queen of the khalasar. In this role, she found help from Ser Jorah Mormont, an exile knight from Westeros. He acted as translator of both Dothraki language and customs. From him, she learned more about the tribe and her role in it.

After a lifetime of treating Daenerys as his chattel, Viserys had trouble adjusting to her growing self-awareness. He grew increasingly impatient for his army and wondered why they were riding away from the Narrow Sea and Westeros. He blamed her. During a quiet moment along the ride, as she left the band for private time, he attacked her. Her bloodrider Rakharo saved her. He asked her if she wanted him killed, but she said no. As punishment, Rakharo forced Viserys to walk. After the arrived in Vaes Dothrak, the Dothraki gathering place, Viserys mistook an invitation as a summons. He struck Daenerys, but she struck him back. She said, “The next time you raise a hand to me will be the last time you have hands.”

When she became pregnant with Drogo’s child, she gained even more power with the Khal and his khalasar. At one gruesome ceremony, she ate a raw horse heart without vomiting. That gave way to the prophecy of a son, a great warrior who would mount the world. Realizing that he had lost her to the khalasar, Viserys tried to steal the dragon eggs, but Ser Jorah stopped him. At a feast to celebrate the pregnancy, Viserys confronted Drogo. He threatened to kill Daenerys and her child, but Drogo seemed to relent. Relent, however, he did not. In the seasons most gruesome death, he poured molten gold over Viserys head. Though Jorah advised her to look away, Daenerys insisted on watching.

He was no dragon. Fire cannot kill a dragon.

Birth of the Dragon 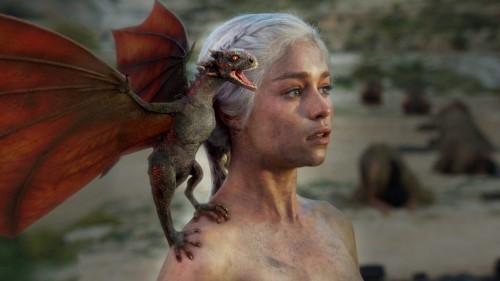 When King Robert Baratheon sent an assassin to kill Daenerys and her child, he began a chain of events that would finalize her transformation to an independent and powerful woman. Though Ser Jorah thwarted the assassination, the attempt enraged Khal Drogo. It convinced him that he must war against the Seven King. He led his khalasar in war. To raise slaves to sale to finance the war, he attacked a town. Daenerys, ashamed of the men raping the women, put them under her protection. This included a healer named Mirri Maz Duur. But Daenerys’ charity proved to be her fatal flaw. It bred discontent in the khalasar. When one warrior challenged Drogo, Drogo killed him, but not before being wounded.

The wound festered; it threatened his life. Daenerys, who now loved him, made a pact with Mirri Maz Duur. “Only life can pay for death,” the healer said. It appeared that she meant the life of Drogo’s horse. During the dramatic ceremony, Daenerys went into labor and passed out. When she came to, she discovered the child was still born. Drogo was alive, but in a catatonic state. After trying to revive him, Daenerys decided to euthanize him. She knew the proud Khal would not want to live like this.

Most of the khalasar had abandoned her. She had only a few stragglers left. At Drogo’s funeral pyre, she told them that they were now her khalasar. She ordered Mirri Maz Duur chained to the pyre. She also ordered the dragon eggs placed on the pyre. Ser Jorah told her not to do this thing. He believed she intended to sacrifice herself to the fire. He didn’t know that she was creating something new, not a Dothraki khalasar, nor a Westeros-styled lordship, nor a free city like Pentos. What she was creating never existed before.

She walked into the fire.

By all rights, it should’ve consumed her, as it consumed Khal Drogo’s body and Mirri Maz Duur. But Daenerys had learned her lessons from the healer or witch–whatever Mirri Maz Duur was. Only death pays for life. In the morning, after the fire, Ser Jorah and her khalasar discovered her sitting in the ashes. She held an infant dragon in her arms, as two others crawled over her naked body. She stood up, and her followers kneeled. The dragon on her shoulder opened its mouth and blew a fledging flame.

We met Daenerys naked and we left her naked. But she was no longer the docile, submissive girl. She was now a woman, experienced in both love and death, hardened by her journey, but also strengthened by it. She was full of confidence and purpose. As the dragons were in their infancy, so was her khalasar, and so was her understanding of her power. As she stood naked in front of her kneeling followers, no one could doubt there was greatness to come. Viserys believed he was the dragon, but in the end, Daenerys realized the dragon had always been her.

I am Daenerys Stormborn of the House of Targaryen, of the blood Old Valyeria. I am the dragon’s daughter, and I swear to you that those who would harm you will die screaming.

Daenerys to her Khalasar