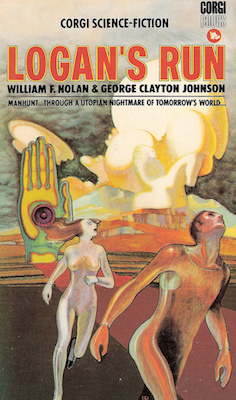 In the society of the future, people live for twenty-one years, before they turn themselves in for Sleep,  a socially demanded suicide. As can be imagine, not everyone is onboard with this idea. Many people want more than twenty-one years, so when the imbedded flower in their palm begins to blink red and black, they run. As a Sandman, a member of an elite police force, Logan-3 hunts and kills runners. But one day, as a runner is dying, he hands Logan a key and says, “Sanctuary.” At that moment, the flower in Logan’s hand begins flashing red-black, red-black, red-black. His Lastday has arrived, but instead of turning himself in for Sleep, he concocts a plan of tracking down Sanctuary and killing its infamous gatekeeper, Ballard. In this way, he hopes to buy himself the right to a longer life. But his fellow Sandmen, especially his partner Francis, knowing nothing about this plan, sees Logan as a runner—another target to chase and kill.

For reasons that I’ll leave to your speculation, these days I find myself interest in dystopia literature. Dystopia is a relatively new word. It’s first documented use was in 1868, in a speech by  John Stuart Mill, an English philosopher, who used it as an antonym to utopia. As utopia refers to a perfect, idyllic society, dystopia refers to a society so broken it had become hostile to the very humans its designed to serve. In dystopia literature, regardless of who the protagonist is or what goal he has established for himself, and regardless of what other antagonist he faces, the society he lives in is always the primary antagonist. Though we tend to think of dystopian literature as futuristic, it can also exist in historical fiction, like Nathanial Hawthorne’s The Scarlet Letter, or in novels with contemporary settings, like Ken Kesey’s One Flew over the Cuckoo’s Nest. Dystopian literature isn’t about the future or the past; it’s about ourselves and our times.

Published in 1967, Logan’s Run found inspiration in the Youth Movement of the 1960s. It found inspiration in the infamous saying that everyone over thirty is the enemy. Fiction writing is the art of asking what if and extrapolating the answer. Collaborators William F. Nolan and George Clayton Johnson asked the question: What if the inherent ageism of the Youth Movement was institutionalize as a policy of society? What if everyone over twenty-one had to die? Their answer is Logan’s Run. At it’s heart, it’s a science-fiction novel with a simple chase plot. As such, it’s a page-turning; it’s a short novel that is never boring or redundant. Logan and his companion, Jess, race across the American continent, searching for Sanctuary, while the Sandman Francis chases them and closes in. Both Logan and Jess are on Lastday. Both had to die, because no one can live over twenty-one. The Youth Movement’s ultimate victory!

But since it’s no longer 1967, since those who had led the Youth Movement are well over thirty—are now the enemy—why do we still pick up Logan’s Run and read it? Is there still relevancy in this dystopian novel? Yes, because though Logan’s Run found its inspiration in the chaos of the Vietnam Era, it is really about an America that’s struggling with itself and its history. In their flight, Logan and Jess visit a re-enactment of a Civil War battle and a statue to Crazy Horse mounted on a horse that puts Mount Rushmore to shame. They visit an underwater city, unused due to flooding, and a frozen prison where the cold, rather than bars, keep the prisoners caged. They visit a Washington D.C. destroyed by a war of our own making, the Little War. In short, they survive in an America half destroyed by the indifference of man and by the complacency of the masses. What could be more complacent than accepting death at twenty-one?

She took an age to build. She covered a hundred underwater miles. She provided living quarters and work space for twenty thousand technicians and their families–and she gave sustenance to a quarter of the world. She was a vast food-processing center sunk under a plasteel dome, and through her locks came subs and tenders, skimmers and harvesters.

I found this landscape the most interesting and entertaining aspect of the novel. The plot was simple, and the characters were no better developed than what the plot required. Logan experienced a character arc, but it was predictable. The style was sparse, succinct. Nolan and Johnson wasted no words describing the familiar. When they turned to description, they turned to features unique to this world they created. This made for a fast, easy read. Despite this brevity, they managed to create a world that felt real and realistic. Logan’s Run wasn’t the most satisfying read. The plot was too simple for my taste, and its climax felt anticlimactic. It felt contrived. With the exception of Logan, its characters felt flat. Even Logan, I felt, required more complexity. When he suffered an emotional crisis—that event that completed his character arc—I wanted to feel it more than I did. For that reason, I don’t believe that the sparse style imbued the story with the emotional depth it required.

I wanted to like Logan’s Run more than I did. When I made the decision to survey dystopian literature, I made the decision to begin with Logan’s Run. For years, I meant to read it, and when I purchased it on Kindle, I couldn’t wait to begin it—even though I was in the middle of a couple other books. But after reading it, I confess to being disappointed. I like the premise, and many scenes were exciting and fun, and I loved the vision of the future it created, but the book as a whole left me dissatisfied. It left me wanting more.

Perhaps it left Nolan wanting more, too, because ten years later, he wrote—sans Johnson—Logan’s World. And he had been writing the Logan series every since. He followed it up in 1980 with Logan’s Search, and in 2001, he released in ebook format Logan’s Return. Two more books in the series, Logan’s Journey and Logan Falls, are said to be forthcoming. Rumor also tells of a sequel written by Johnson called Jessica’s Run, but he died in 2015 without publishing it.

I like to end these reviews with recommendations to either read or avoid, but I find any honest recommendation I make will be soft. The novel is worth reading, but it is far from being a must-read, even for fans of dystopian literature. Logan’s Run is a perfect weekend read. It is short, dramatic, and imaginative. At least for me, it didn’t inspired the reflection and contemplation of other dystopian novels, but it is not devoid of thematic merits. It had its thrills, so I believe most readers will like it, but I doubt if many will love it.