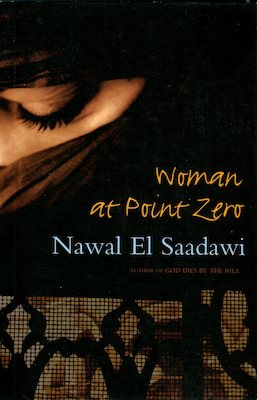 Born in 1931, Nawal El-Saadawi has lived the type of multifaceted life that seems unreal. In 1955, she graduated the University of Cairo Medical School, specializing in psychiatry. Three years later, she wrote Memoirs of a Woman Doctor. During the 1960s and the early 1970s, she worked in public service as the Director of Health Education; during the middle 70s, she ran the High Institute of Literature and Science. She published Woman at Point Zero in 1973. Later she wrote God Dies by the Nile and The Hidden Face of Eve. In the 1980s, her opposition to Anwar Sadat saw her imprisoned. His assassination saw her released. When Muslim extremists added her name to list of who to kill, she fled to the United States. She taught at Duke University and (my neck of the woods) Washington State University. She returned to Egypt in the middle 90s. In 2004, she ran for president, but she was forced out of the race. She’s still living, writing, and working for a better Egypt.

Woman at Point Zero is a feminist novel. I’m going to call it a novel for simplicity’s sake–I found it in the fiction section of the public library–but it’s more accurately called creative nonfiction. Its protagonist is Firdaus, a prostitute sentenced to die for murder. In one night, she relayed her life story–from her unhappy birth to the murder that made her a dead-woman-walking–to a visiting psychiatrist. It’s inspired by a real visit El-Saadawi had made to such a woman. Where the story strays from nonfiction to fiction is anyone’s guess, but it all feels true. Given the childhood Firdaus lived, a childhood filled with physical, emotional, and sexual abuse, how else would her life play out?

Can the Nile, and the sky, and the trees change? I had changed, so why not the Nile and the colour of the trees? When I opened the window every morning I could see the Nile flow by, contemplate the green of the water, and the trees, the vivid green light in which everything seemed to bathe, feel the power of life, of my body, of the hot blood in my veins. My body filled with a warmth as soft as the touch of the silken clothes in which I dressed, or the silken bed in which I slept.

As I read Woman at Point Zero, I kept remember the line in John Irving’s The World According to Garp that tells us that a woman has the choice of being someone’s wife or someone’s whore. He wrote that novel in 1978. I hope woman face better choices these days–I’m not qualified to say–not only in the United States, but also in Egypt and around the world. Throughout her life, that was the only choice Firdaus faced. But was it really her choice? The cruelty of men and the indifference of women made the choice for her.

As a feminist novel, it explores the theme of female independence. That was expected. What was unexpected was the various motifs El-Saadawi developed to Firdaus’ world. These motifs explored the material world, eating, and people’s eyes. It’s the descriptions of people’s eyes that I most remember from this short novel.

At a little over two hundred pages, it is a short novel. It has three chapters, with the middle chapter is where Firdaus talks about her life and the events that condemned her. The other two chapters create a frame in the psychiatrist’s point-of-view.

How many years of my life that went by before my body, and my self became really mine, to do with them as I wished? How many were the years of my life that were lost before I tore my body and my self away from the people who held me in their grasp wince the very first day? Now I could decide on the food I wanted to eat, the house I preferred to live in, refuse the man for whom I felt an aversion no matter what the reason, and choose the man I wished to have, even if it was only because he was clean and well manicured.

I came to Woman at Point Zero by browsing library shelves. I had no idea what I was looking for, or even if I was really looking for a book to read. Maybe I was just browsing shelves because I’m a man who likes to be surrounded by books. The moment I pulled Woman at Point Zero from the shelf, I knew I would borrow it. I’m glad I did. It fits nicely into my World Literature series, where I want to read novels from around the world, to understand the ideas, lives, and perspectives of foreigners. The Muslim world, tied to our own Western world in both friendship and war, have a long and beautiful literature heritage. It’s wonderful to see writers like Nawal El-Saadawi enrich it even more.