Book Review: Under the Skin by Michel Faber 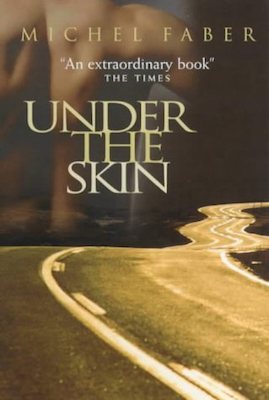 Though homely in the face and wearing the largest glasses most people have every seen, Isserley has large breasts. They’re modeled after the breasts of a centerfold model, and in all her travels, she had never encountered another woman with a pair that even approaches her size. She needs them because she has a difficult job, a job only she can do. It involves driving the highways of Scotland looking for muscular male hitchhikers, lost men whom no one will miss, because after encountering Isserley, there is a good chance they’ll go missing. The passenger seat of her car is rigged with needles that would inject the men with icpathua, a powerful narcotic that knocks them out instantly.

Under the Skin, published in 2000, was Michel Faber’s debut novel. Two years before releasing this book, he wrote a short story collection called Some Rain Must Fall, and a couple years later, he wrote The Crimson Petal and the White, which was adapted into a miniseries by BBC. Dutch by birth, he and his family emigrated to Australia when he was seven. He moved to Scotland in 1993. Legally he’s still a Dutch citizen, but he claims no country as his own. Though this is the first book by him that I’ve read, since I found it a powerful and moving story, I intend to read others.

Driving through the Highlands of Scotland was an absorbing task in itself; there was always more going on than picture postcards allowed. Even in the nacreous hush of a winter dawn, when the mists were still dossed down in the fields on either side, the A9 could not be trusted to stay empty for long. Furry carcasses of unidentifiable forest creatures littered the asphalt, fresh every morning, each of them a frozen moment in time when some living thing had mistaken the road for its natural habitat.

I read Under the Skin as an impulse at the end of September. During my movie watching binge of September, I saw the 2013 movie starring Scarlett Johansson. Intrigued by the movie, I decided to read the book, but I found them two different creatures. In truth, I liked that. Though they both had the same concept, the filmmakers decided to explore different themes, and in so doing, created something different from the book. I imagine I’ll write a review of the movie in the coming weeks, but this review is about Faber’s novel.

Slow and spooky is Faber’s style in Under the Skin. The action plays out in the course of days, a week, maybe, two weeks tops. We meet Isserley after she had been doing her job—abducting men—for a few years. She and her coworkers work for Vess Corporation. When Amlis Vess, the rebellious son of the company’s owner, visits the farm where they live and work, he questioned the morality of what they do. It causes Isserley to questions her own role in the process and forces her to wonder about her future.

Under the Skin is an extended metaphor of our current society. It explores such themes as the worker relationship to the company, the wealthy exploitation of the poor, and the moral consequences on living off taken resources. Like most people who must work for their living, Isserley is just a cog in a wheel, important, yes, but not—as she wants to believe—irreplaceable. Though never preaching, not even during Amlis Vess’ sermons, Under the Skin  requires us to examine the society we created, the profit-motive that drives it, and our own complicity in the imperfect economy.

Isserley considered the message, which was MERCY. It was a word she’d rarely encountered in her reading and never on television. For an instant she racked her brains for a translation, then realized that, by sheer chance, the word was untranslatable into her own tongue; it was a concept that just didn’t exist.

I enjoyed reading Under the Skin and I recommend it. It’s an intriguing book, filled with beautiful proses, that tells us a story we can relate to, even as we recognizes its inherent terror.