Book Review: The Ocean at the End of the Lane by Neil Gaiman

Home / Book Review: The Ocean at the End of the Lane by Neil Gaiman 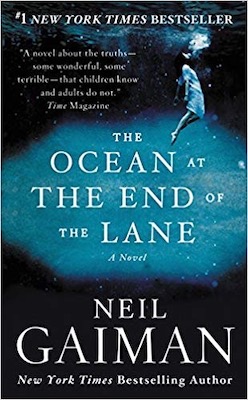 Though The Ocean at the End of the Lane is the first novel by Neil Gaiman that I’ve read, I wasn’t as unfamiliar with his work as I had believed when I read it. With Roger Avary he wrote the screenplay for Beowulf (2007), directed by Robert Zemeckis. He also wrote the novel Stardust (1999) that was adapted into the 2007 film by the same name. I’ve seen and enjoyed both of these films. Though neither are favorite films, I loved the imagination required to create them. While reading The Ocean at the End of the Lane, I reencountered a source of that imagination–Neil Gaiman.

Published in 2013, The Ocean at the End of the Lane is a short novel, but it’s filled with so many wonderful details it feels much longer. Gaiman’s style is simple, elegant, and poetic. That makes it a simple book to read, but in no way is the story he tells simple or simple-minded. He tells the story of a seven-year-old boy, never named, who encountered a small coven of witches. Or were they witches? They denied the word themselves, but they offered no other word to replace it. In any case, they were magical, and they took our protagonist into their magical world. With him, we, the readers, join in the experience. In the descriptions of the setting and the creatures encountered in it, Gaiman proves himself an imaginative writer.

At its heart, The Ocean at the End of the Lane is a coming-of-age novel, but within that genre, Gaiman breaks with tradition. Most coming-of-age novels, at least most modern ones, deal with protagonists in their teenage or college years. I suppose we have J. D. Salinger’s The Catcher in the Rye to thank for that, but the list is endless and include such varied works as Stephen Chbosky’s The Perks of Being a Wallflower, Bret Easton Ellis’ Less than Zero, and a host of Young Adult dystopian novels like Suzanne Collins’ Hunger Games series. Even the popular but often dissed Twilight series by Stephenie Meyer falls into this category. In these novels, the young protagonists struggle with such issues as sex and sexuality, peer pressure, bullying, alcohol and drug use, and identity crises. Important themes–well worth the thousands of pages of print dedicated to exploring them.

But in The Ocean at the End of the Lane, Gaiman gives us a much younger protagonist, and in doing so, he reminds us that the joys and pains of growing up doesn’t begin at thirteen or end at twenty-one. It’s an ongoing process that begins at birth and, arguably, doesn’t end until death. I suspect that’s why he framed the story with passages of a middle-aged man, our protagonist, looking back at those magical events of his childhood. In creating a younger protagonist, Gaiman gives us new themes to explore. Perhaps the biggest theme in the novel is magic itself. I like that the magical events are never explained in the novel. For the protagonist and his magical friends, the magic exist in the same way that grass, sky, and buildings exist for the rest of us.

Adults follow paths. Children explore. Adults are content to walk the same way, hundreds of times, or thousands; perhaps it never occurs to adults to step off the paths, to creep beneath rhododendrons, to find the spaces between fences. I was a child, which meant that I knew a dozen different ways of getting out of our property and into the lane, ways that would not involved walking down our drive.

Another theme Gaiman explores is the hidden lives we live. Adult live secret lives from their children. This include things done behind closed bedroom doors, but Gaiman is less interested in that than in the economic duties adults have but children don’t understand. Going to work, paying the mortgage, acquiring the food–all hidden from children. Not secret, but hidden. And children also have hidden lives from their parents. They have games and experiences that the never discuss with adults. Our protagonist has a whole ocean at the end of the lane that he never tells his parents about. Even our adult narrator, looking back at his childhood, had spent most of his live not remembering the hidden life he had spent as a child. In the Harry Potter world, it’s called the obliviate spell, that erases the mind of memories, but in The Ocean at the End of the Lane, it seems less a spell and more a process of being an adult.

Neil Gaiman (born 1960) was born in England, but he now lives in the United States. Since a very young age, he knew he wanted to be a writer. After college, he worked first as a journalist, and then he became involved with comic books and graphic novels. I don’t know enough about either to judge his contribution to them, but he’s well known for The Sandman series. Of novels, he has also written Stardust, American Gods, and The Graveyard Book. The Ocean at the end of the Lane won the National Book Awards in 2013.

On Goodreads, I rated The Ocean at the End of the Lane five stars. I don’t believe I’ve rated too many novels five stars. Five stars if perfect, but even great works of art has flaws. Gaiman’s novel is as flawless as they come. In all its pages, I believe I encountered only one word–a superfluous adverb–that I would’ve changed. Since it’s hard for me to imagine anyone picking up this novel and not loving it, I urge you to read it. It’s fun and eerie, scary and imaginative.